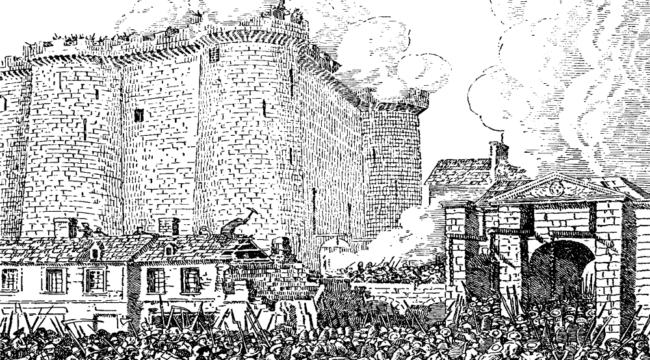 Today we glance backward… in the hope it may help us look forward.

From yesterday’s reckoning (and our co-founder Bill Bonner):

By the 18th century, France had become the greatest power in Europe, the richest and most populous country in the western world, and the clear leader in art, science, philosophy, education, cuisine, fashion, architecture…and, of course, viticulture. It had the richest people in the world, the prettiest women, and the best booze.

It also had the most enlightened economists – the physiocrats – from whom Adam Smith was boosting some of his best ideas.

A poll taken in the early 1780s might have shown the French to be extremely optimistic and confident. And why shouldn’t they be? The last major financial crisis – caused by John Law’s Mississippi Bubble – blew up over 60 years before. And had the world ever seen anything approaching the splendor of Versailles?

Then came 1789 and its revolutionary deliriums:

But in 1789, Paris mobs came to the crossroads of history and veered left. They replaced an absolute monarch who had very limited power, with a people’s republic restrained neither by common sense nor common decency.

Does Mr. Bonner “pity the plumage but forget the dying bird?”

Perhaps he does — to hammer home a larger point. But the larger point may be plenty sharp.

Much of what may appear positive to us today – liberality, intellectuality, humanitarianism – had all been already brought to us by the liberal, courtly absolutism, while the French Revolution which used all these words in reality did nothing more than brutally extinguish them.

What spark — or which sparks — set the revolutionary fires raging?

Caveat lector: You do not hold a history book in your hands. You hold what passes as a financial newsletter… and barely at that.

Its editor is not a historian at a lectern. He is instead a popinjay in an armchair, given to the simplifications, half-truths, errors and pomposities of the type.

We nonetheless proceed… in the spirit of scholarly inquiry…

First, there was the estates system; a feudal hierarchy, a social pyramid. At the pinnacle was the First Estate — the church and its officiating clergy.

Wedged in the middle, in the Second Estate, was the nobility.

Below the nobility squatted the remaining 98% of France, the massive base of the pyramid — the Third Estate — merchants, tradesmen, lawyers, peasants, etc.

The government squeezed the majority of its tax revenues from this Third Estate. That is, the lower 98% hauled the bulk of the freight.

The 98% kept the 2% bouncing along in a sort of opulence. Naturally… the 98% bristled and bridled under the burden.

But they had been accustomed to the business for generations. Why finally raise a mighty rumpus in 1789?

And in the 1780s, the people of France were falling out of formation…

France was the most populous nation in Europe. It thus required the most foodstuffs.

A fantastic volcanic eruption in 1783 — in present Iceland — threw out so much soot it blew out the sun.

Hunger plus inflation is a dreadful combination.

A shrinking belly… twinned with a shrinking currency… equals a growing crisis.

It meant — in this instance — revolution.

It meant the slaughter of civilization. It meant rivers, lakes, seas of blood. It meant war… ultimately.

It meant two centuries of ideological mischief of one sort or other.

Lenin, Mao, Pol Pot, Castro and other 20the century hellcats took their examples from the French revolutionists and their bloodlettings.

The Alan Greenspan of the 18th Century

But we have neglected the crucial role of a critical actor… “the Alan Greenspan of the 18th century” — Monsieur Jacques Necker — to whom we now turn.

None of this might have happened, however, except for the efforts of the Alan Greenspan of the late 18th century — Jacques Necker. It was Necker who replaced laissez-faire economist, Jacques Turgot, as French finance minister in 1776.

Turgot’s free-trade policies had the fatal flaw of all sensible rules – they benefited everybody to the advantage of nobody in particular. Turgot dissolved the guild system, eliminated the corvee (the forced labor of the peasants), imposed a simple property tax and opposed all forms of economic privilege at the expense of the common good. He even set himself against Marie Antoinette, by refusing to grant favors to her cronies. Since everybody in France in the 18th century as well as every American in the 21st wanted the privilege of picking someone else’s pocket, Turgot eventually made enemies of nearly every class. Louis XVI, though responsible for the well-being of the entire nation, had not the strength to stand up to the special interests.

Turgot even had a prophetic intuition and a view of history similar to our own. Periods of civilized progress are followed, he noted, by periods of barbarism and madness.

Dismissed in 1776, he warned Louis XVI: “Do not forget, Sire, that it was feebleness that placed the head of Charles II on the block.”

Necker made enemies of no one. His program was the opposite of Turgot’s; he favored particular privileges at the expense of everybody else. Rather than tax people to pay for state expenses, Necker borrowed — taking short-term, high-interest loans that brought the government close to bankruptcy. Then, Necker turned to accounting tricks to show that the government was actually running a surplus! The patsies loved it.

Pushed out for the first time in 1781, Necker was called back on the eve of revolution in 1788 for another dose of his financial magic. But it was too late. The old miracle elixirs — heavier debt and cooked books — wouldn’t work any longer; bankruptcy was unavoidable. The aristocrats got rid of him again — on July 14, 1789. The mob, which still had faith, was so disappointed… it headed for the Bastille.

History Doesn’t Repeat, But It Rhymes

History does not repeat. But it does rhyme, as said the great scalawag Mark Twain.

Now this question: Will Americans head for their own Bastille?

Perhaps they already have in one sense…

Substitute July 14, 1789, for January 6, 2021… substitute the Bastille for the United States Capitol… and you may have yourself a rhyme.

The cadence is a bit off, of course.

The only blood at the Capitol came spilling out of a 35-year-old Air Force veteran’s neck, shot through by a Capitol policeman.

No heads went up on spikes at the Capitol — feet merely went up on Nancy Pelosi’s desk.

And the marauders walked out not long after they walked in… and went home.

Nor were they famished. By the appearance of many, rather the opposite.

In brief, 2021 America is not 1789 France. The Church is punchless, American nobility is a contradiction, no king beleaguers us.

But do millions of Americans believe they are being bossed and exploited by an overbearing elite?

Do they believe they are languishing at the base of the economic pyramid… while the pyramid’s tip lives grandly — almost royally?

Many do, yes. Do they believe the Federal Reserve chairman — whoever it may be — is a modern Jacques Necker?

Are they ready for a man upon a white horse? We do not know.

But many believe, rightly or wrongly, that a man with white hair was fraudulently elected over a man with orange hair.

Rasmussen reports that 41% of American voters do not believe the sitting president was lawfully elected.

We do not pretend to know what they will reveal (our spies report alarming whispers. But we had best keep them dark).

Another possible historical  rhyme: As in 1789 France, inflation is on the jump. It may or not prove transient.

And history’s rhyme might just be an awful clang.

A prediction? No, of course not. Merely a possibility. And perhaps an unlikely one at that.

But what is the ultimate impact of the French Revolution?