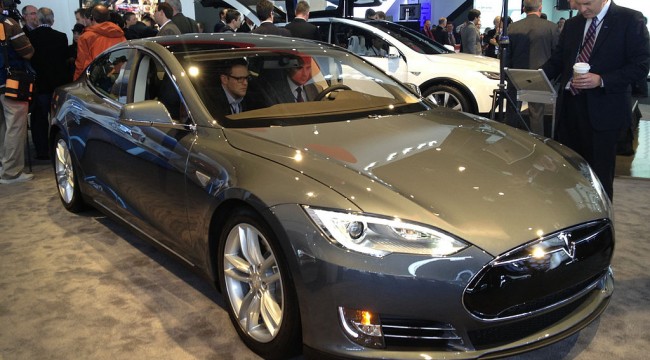 Apple, Amazon, Tesla and the Changing Dynamics of the Car Industry

Apple’s brand extends far beyond technology and coolness. Over the years, the company has accumulated incredible goodwill with consumers. There is only one other company that comes to mind that has generated a similar amount of affection: Amazon.com. Amazon made shopping online easy, its customer service is impeccable, and it is transparent with consumers about pricing. After all, it allows other merchants to sell their merchandise through its website. Amazon will even ship it for them. Consumers’ trust in Amazon’s pricing is so great that most people don’t even bother with comparison shopping anymore; they skip Google (which is not good news for Google, by the way) and go directly to Amazon.

I recently found myself willing to pay a few dollars more on Amazon than on a competitor’s website because I knew that if I needed to return the product, the process would be seamless. That goodwill turns Apple and Amazon into “platforms” (a very trendy word on Wall Street now), allowing them to launch a wide variety of new products.

When Apple comes out with the Apple car, it will be able to grab a disproportionately large market share from the General Motors of the world because of that deep well of goodwill. By the time my youngest child, Mia Sarah, who is almost two, learns to drive, internal combustion engines will likely be a relic consigned to museums (just like Ford’s Model T).

I had an “aha!” moment when I recently visited a Tesla store and saw its cars’ power train. It looks just like a skateboard — it basically consists of a flat slab of metal (which houses the battery), four wheels and an electric engine the size of a large watermelon. That’s it — the Tesla has only 18 moving parts. I don’t know how many moving parts an internal combustion engine (ICE) car has, but it must be hundreds if not thousands. Interestingly, ICE cars also have more electronics than a Tesla.

Wall Street is going gaga over the stocks of dealerships (especially after Warren Buffett’s Berkshire Hathaway bought Van Tuyl Group) and carmakers. I am in the minority, but I think that party will come to an end. Just like Tesla, Apple is not going to be using a dealership model to sell its cars. It would not want the Apple car buying experience to be tainted by a sleazy car salesman. Just as with the iPhone, the company will want to have complete control of the buying experience.

If both Tesla and Apple bypass the dealership model, the GMs of the world will be at an even larger competitive disadvantage. They will have to abandon the dealership model too. Yes, I know, selling cars directly to consumers is not legal in many states, but if the U.S. Constitution could be amended 27 times, the law on car sales (which is an artifact of the Great Depression) can be amended as well. The traditional dealership model is unlikely to survive anyway, as its economics dramatically degrade in the electric-car world. A car that has very few moving parts and minimal electronics has few things to break. Consequently, electric cars will need less servicing, throttling the dealerships’ most important profit center.

The baby boomer generation romanticizes cars. Most boomers can recite the horsepower and other engine specs of every car they have ever owned. For the tail end of Gen X (my generation) and Millennials, a car is an interruption between Facebook and Twitter. We know the brand of speakers in our car but if asked would have to Google its horsepower. We feel little romanticism for our cars and have much higher brand loyalty to Apple and Google than to GM or Ford.

What is also amazing about electric cars is that they aren’t that much different from smartphones. Smartphone prices have declined significantly over the years because their components became ubiquitous and commoditized. With the exception of spark plugs and tires, most components of a GM car will be different from the ones you’ll find in a Ford. The opportunity for scaled manufacturing and so commoditization is very limited in the auto industry.

The simplicity of electric cars and the declining ambition of Tesla, Apple, and whoever else enters that space to be known as a “car” company will likely lead to commoditization of components and thus lower prices. Tesla today is more a software and battery company than a car company.

Think back to the day when Apple introduced the iPhone. No one suspected that it (and the smartphones that followed) would enable a service like Uber, which is busy putting cabdrivers worldwide out of business.

The unforeseen consequences of the advent of electric cars will reverberate much farther than the demise of dealerships and significant shifts in market share in the auto industry.  Gasoline can only be made from oil. (Yes, there is ethanol, but the economics of ethanol in the U.S. are problematic.) Sources of electricity are diverse — natural gas, coal, nuclear, solar, wind, hydro, oil (and I’m sure I’m forgetting something). Seventy percent of oil goes into cars and trucks. Just imagine for a second the shifts in global political alliances if oil lost its luster. The U.S. might forget how to spell “Saudi Arabia,” and the Middle East might start looking very different.

When the day comes that Apple makes its entrance into the auto industry, it will likely be successful and very disruptive. After all, it has the much-needed software know-how to design a car (it is already working with car companies on CarPlay, the iPhone-centered car infotainment system), it boasts a global network of stores, it has a deep well of goodwill with a billion fans globally, it possesses unlimited resources ($150 billion of net cash and it generates $50 billion of free cash flows a year), and its imagination has not been damaged by decades of producing cars with internal combustion engines.

Let me stress that last point. There is a very good reason why Nokia, which at one time was the dominant cellphone manufacturer, failed to compete with Apple’s iPhone. It had too much institutional knowledge. It had hundreds of engineers who tried to add IQ to a dumb phone. They were attempting to convert Symbian, a dumb phone operating system, into a smart phone operating system. Despite Apple showing Nokia how the smartphone should look, they couldn’t see their product as a smartphone but rather just as the next iteration of a dumb phone.

General Motors’ answer to Tesla was not any different from Nokia’s response to the iPhone. GM came out with the Chevy Volt, which was really one of its internal combustion engine cars with an electric engine dumped in. Unless an ICE car company creates a silo unit isolated from the rest of the operation, it will be very difficult if not impossible to get engineers who have designed ICE vehicles all their lives to suddenly change the paradigm of their thinking and turn into electric-car engineers.