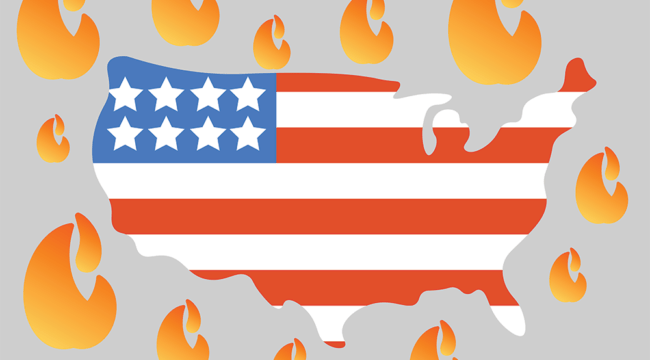 A curious fact of American law has revealed itself:

Authorities will order the arrest of this hellcat for lounging on a beach… or that hellcat for invading a public park… or a batch of other hellcats for congregating in a church of God.

A pandemic — after all — is loose.

The rules may shock the sensibilities. They may outrage the conscience. They may be tough to worry down.

But lives dangle in the balance, we are told.

As the man who governs New York life — Mr. Andrew Cuomo — has pleaded from Albany:

“If everything we do saves just one life, I’ll be happy.”

And yet… and yet…

The authorities that would collar the beach squatter, the park invader, the God worshipper…

Are the same authorities who would hand away entire cities to riot, to arson, to thieving, to bedlam, to lawlessness on the mightiest scales.

Minneapolis police were even ordered to quit their posts… and surrender their bastions to anarchy.

But the social order — like the natural order — detests a vacuum.

And as naturally as nature itself… anarchy poured in to fill the void: 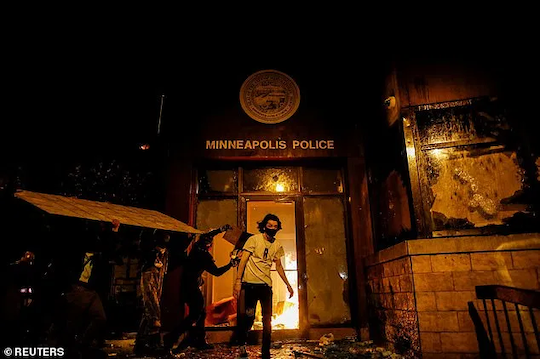 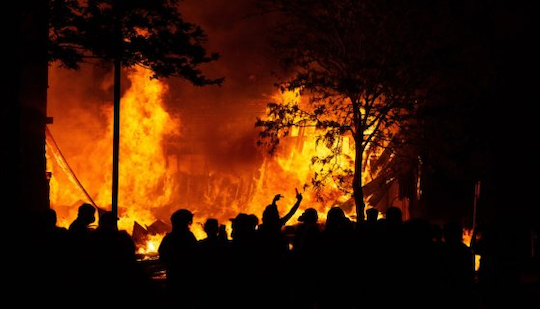 Law and order fled for the quieter precincts… where the resistance is easy.

In one video, a roving band of uniformed police came upon the forces of anarchy — young family members, evidently — camped defiantly down upon their residential porch.

Law and order ordered them indoors. But anarchy failed to file indoors at the requisite rate.

“Light ’em up!” came the order… and law and order shot ammunition into them.

This ammunition consisted of paint. It is designed not to slay but to sting. To scatter color rather than penetrate flesh. 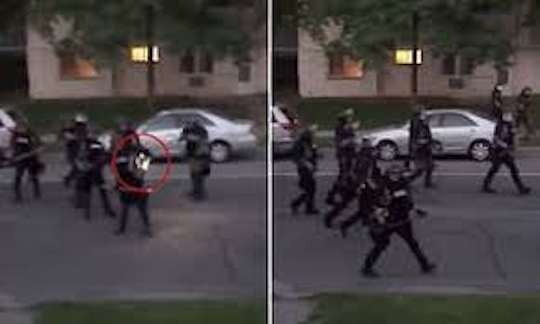 But is standing innocently upon a house porch unlawful? Were these porch-standers a public menace? Was mayhem on their minds?

The three answers are no.

Yet they were sent indoors under a rain of paint.

Law Is a Matter of Mass Consent

And so we arrive at a fundamental truth, largely invisible in lawful and orderly times:

Law is ultimately a mathematical proposition.

If sufficient numbers of citizens flout, mock and shoo aside the law, the law is no law at all.

Thus we find that law reduces to mass consent.

The chief vulnerability of the beach sitter, the park walker, the churchgoer and the porch-stander is this vulnerability:

There are too few of him. The weight of numbers is against him.

The policeman may collar the chance violator.

But if the beaches and the parks and the churches and the porches were packed to suffocation… the police have only so many nightsticks, so many handcuffs, so much paint-filled ammunition.

These would be scenes of anarchy, one and all.

We believe the point merits emphasis:

It is the general willingness to go along that ultimately hardens airy law into thick concrete.

The point is obvious — perhaps too obvious.

Yet the nose on the face is obvious. The eyes look straight past it nonetheless.

It often requires a special effort of the eyes to hunt out the invisibly obvious.

And the eyes might take a closer look on occasions as these… to give their owners a truer picture.

But let us turn our eyes to a less obvious question:

Is the United States plunging into lawlessness?

Cracks were already appearing within the lawful structures. The economic lockup brought them out.

And citizens were beginning to withdraw their customary consent.

They began to snap their fingers at authorities… and remind them who truly bossed whom.

These are types not naturally given to anarchy. They were  — in fact — often exemplary citizens who owned businesses, filled churches, coached Little Leagues and led Boy Scouts.

They washed behind the ears.

We will no longer allow you to wreck our livelihoods, they thundered. They demanded a lifting of restrictions.

The authorities wobbled in many instances… and caved in.

Now unlawful riots, fanned into existence by the authentically anarchic, sweep the land.

Will these riots soon fatigue themselves into oblivion?

What we have been witnessing on the streets of Minneapolis is just the beginning…Our nation is so deeply divided, and a large portion of the population is losing faith in the basic institutions that govern our society.

Overall, 40.8 million Americans have filed new claims for unemployment benefits over the past 10 weeks. That is the greatest spike in unemployment in all of U.S. history by a very wide margin, and it means that more than one-fourth of all the jobs in the United States have already been wiped out…

We shall see what happens, but we may soon have tens of millions of very angry unemployed Americans that are unable to pay their bills anymore.

And with each passing day, more bad economic news just keeps rolling in. We just learned that orders for durable goods were down 19.4% on a year-over-year basis last month, and we also just learned that pending home sales were down 34.6% in April compared with the same month a year ago.

So much anger was building up all over America during the “good years,” and now this new economic depression is going to make things much, much worse.

When there are no jobs available and people can’t even provide the basics for their families, we are going to see frustration on a scale that is unlike anything we have ever witnessed before.

So please take careful note of what is happening in the streets of Minneapolis right now, because that is what the future is going to look like in all of our major cities.

We petition the fates with one simple request…

We ask only that this troubled future veer past our adopted city of Baltimore.

Well do we recall the 2015 insurrections. They had similar origins to the Minneapolis insurrections, in fact.

And this audience member has limited desire to witness a second act.

Yet we will raise this one half hearted cheer for the riots:

They knocked the virus clear out of the headlines… if only for a spell.

Upon further reflection, let us raise another cheer, a rather heartier cheer:

These riots may bring us nearer to herd immunity.

If only the herd were immune to madness…