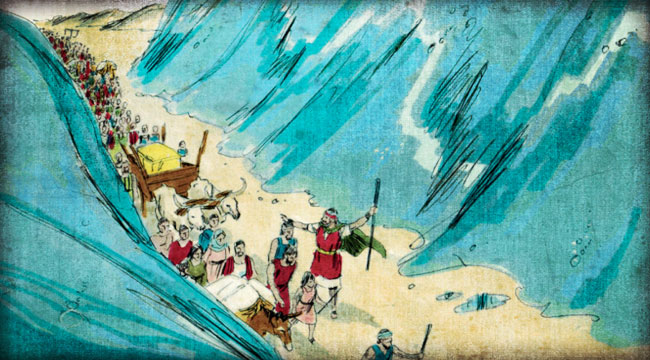 An Outflow of Illegal Emigrants

“Here is a sign that life is getting complicated for U.S. taxpayers with assets abroad,” reported The Wall Street Journal back in August of last year. “More of them are deciding they are better off cutting official ties with America.”

“A record number of U.S. taxpayers renounced their citizenship or green cards in 2013, according to new data,” added The Daily Caller yesterday. “Each quarter, the U.S. Treasury publishes the names of the Americans who officially expatriated… In the last quarter of 2013, 630 people renounced their citizenship or relinquished their green cards, added to the previous 2013 quarters… bringing the total for 2013 to 2,999.”

Yes, nearly three years after chronicling the trend in our Addison Wiggin’s Apogee Advisory special report How to Move Your Money Safely out of Harm’s Way, the mainstream finally catches up. It only took a 221% increase from 2012 in the number of people fleeing the “Land of the Free.”

The numbers through Dec. 31, 2013, have already set an annual record, as you can see below… 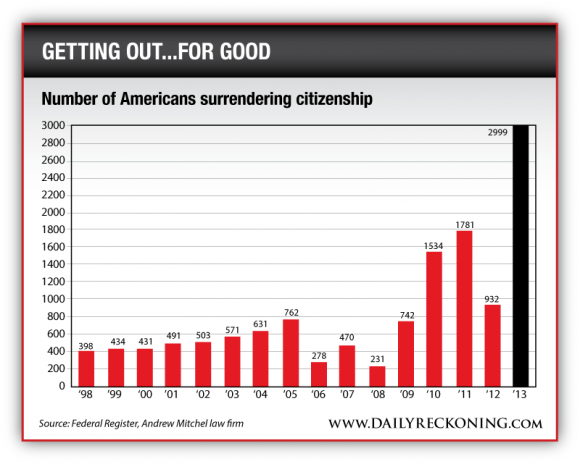 We’re fairly certain some of the spike in 2013 can be written off to people who, for whatever reason, weren’t counted by the feds in 2012. Even so, the overall trend looks like one of acceleration.

Blame it on the factor we cited in our original report — the Foreign Account Tax Compliance Act, a provision slipped almost unnoticed into a bigger “jobs bill” in 2010. FATCA “compels foreign financial institutions to disclose the holdings of their American customers to American authorities,” as described by Reason’s Matthew Feeney –  the better to crack down on Americans supposedly hiding assets overseas.

If the foreign institutions don’t want to disclose those holdings, their customers are then subject to a 30% withholding tax on income from American sources. Rather than comply, many foreign banks and brokerages are simply refusing to do business with U.S. citizens.

Even the IRS realizes the rules are wicked complicated: They were supposed to take effect on Jan. 1 of this year —  but in 2011, after large foreign banks squawked, the IRS pushed back that deadline by one year. In July, the IRS pushed it back another six months, to July 1, 2014. Today, just five months out, there’s talk about delaying them once again — this time until Jan. 1, 2015.

The IRS advisory committee that recommended the delay called implementation “an enormous task.” Heh… shades of the oh-so-successful Obamacare rollout.

We can’t say we get it. It’s a lot of hand-wringing for not a lot of payoff: The congressional Joint Committee on Taxation figures FATCA will generate $8.7 billion over 10 years. That’s an average $870 million in a single year, or 0.14% of this year’s federal budget deficit.

And are you ready for an ironic twist?

It may be lower-income Americans leading the charge through the exits. Under an “exit tax” enacted in 2008, expatriating Americans must pay capital gains taxes on the appreciated value of everything they own — as if they sold it. But the exit tax does not apply if you have a net worth of less than $2 million.

“With increased U.S. tax reporting,” Zurich-based U.S. tax lawyer Matthew Ledvina tells Bloomberg, “U.S. accounting costs alone are around $2,000 per year for a U.S. citizen residing abroad.” Companies abroad that hire Americans are looking at paperwork costs of up to $5,000 per person.

For wealthy people, those costs are manageable — or at least tolerable. For Daniel Kuettel, they were not. He’s a software developer living near Zurich who gave up his U.S. citizenship last fall. He feared he could not get a mortgage because many Swiss banks want nothing to do with U.S. citizens. “It was a really difficult decision,” he told The Wall Street Journal — and that’s even though he wasn’t subject to the exit tax.

“My decision was less about the actual amount of taxes I had to pay, and more about the system,” said an investment banker who’s now a citizen of Hong Kong. “I’m not an ultrawealthy dude,” he told the Journal. “It was the hassle with all the paperwork.”

The really noteworthy numbers were buried deep within one of the Journal’s articles on expatriation: 7.2 million Americans live overseas, according to a State Department estimate. But U.S. taxpayers filed a mere 825,000 foreign account reports in 2012.

That means there are a heck of a lot of “illegal emigrants” — people who’ve simply skipped the country and stopped filing tax returns. “As long as they don’t try to visit the United States,” said an understandably anonymous poster on a Yahoo message board, “or use U.S. embassy or consulate services, they’re left alone.”

Some days, we start to wonder if they have the right idea…

Ed. Note: If you’re daunted by the idea of navigating the craggy shores of international tax law, fret no more. You need not leave the U.S. to get legal revenge on the IRS. In fact, there are 14 still-legal ways to slash your taxes in the year ahead. And readers of The Daily Reckoning were given an opportunity to discover all 14 of them, absolutely free. Still not a subscriber to the FREE Daily Reckoning email edition? Not to worry… You can sign up for free, right here.