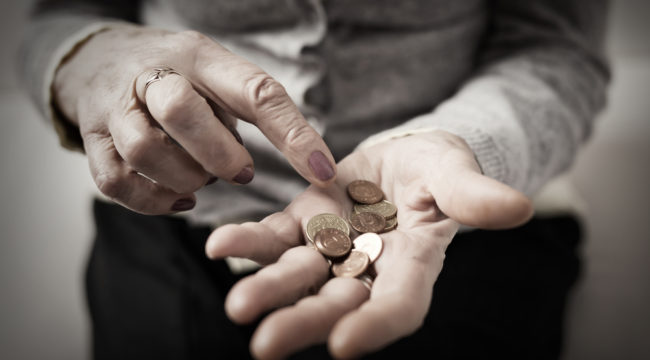 I ran into some disturbing news recently. News that makes me both angry and perplexed.

And it has to do with America’s pensions.

But here’s why it’s so important — even if you don’t have a pension:

Your tax bill could explode as governments around the country seek to bail out insolvent pension plans. And you know how much politicians like to use your tax money to bail out some constituent. They like to prove their “compassion” with your money!

And frankly, the disturbing news I recently discovered could wreck your retirement plans.

All because some bozos on Wall Street are completely inept at investment management. Actually, I’m not sure it’s it’s incompetence… or sheer laziness. But frankly, it really doesn’t matter.

And it all ties back to the miserable job U.S. pension fund managers are doing.

As you know, we’re currently in a long-term bull market for stocks. Ever since the market bottomed following the financial crisis, stocks have been moving steadily higher. The current bull market is one of the longest-standing bull markets in history, now approaching eight straight years of advances.

In fact, I read where this is currently the third-longest bull market in modern history.

You would think that pension funds would be benefiting from this extreme bull market, right? After all, we know that there is a pension crisis in the U.S., with an estimated $414 billion shortfall in what corporations need to be able to pay retirees.

But instead of investing in the stock market, allowing strong returns to make up pension shortfalls, pension fund managers have been underweighting U.S. stocks.

Regardless of whether the market is in a Fed-inflated bubble, no one can deny that it’s been an impressive run. And pension plans are missing the boat.

Over the next eight years, not much changed. As the market plowed steadily higher, pension fund managers kept their portfolios conservative — allocating capital to things like Treasury bonds and “investment-grade” corporate bonds that paid next to nothing.

Remember, this is an eight-year period with interest rates at or near zero percent! What a horrible time to be invested in bonds!

So during one of the greatest bull markets in history, pension fund managers have put their investors’ capital on the sidelines, missing out on huge potential gains and investing in bonds that pay next to nothing in interest.

Can you see why I’m so angry?

But if you somehow think your Social Security retirement package is any better, think again. The Social Security trust fund has zero exposure to the current bull market. Instead, the fund invests in U.S. Treasury bonds. The very same bonds that are paying next to nothing in interest.

According to research firm Nolo, the Social Security trust fund will run out of money in 2035. That’s less than 20 years from today.

It’s unclear what will happen to Social Security payments at this point, but there’s a good chance your benefit checks will be much lower than what you’ve been promised.

And even if they’re not technically lower, you could still be getting ripped off…

The fact is that you’re being lied to. That’s the sad fact when it comes to government data on inflation. The phrase “lies, damned lies, and statistics” may have been popularized by Mark Twain, but the concept is still every bit as vibrant when it comes to current economic measurements.

Unfortunately, those “damned lies and statistics” are likely cutting into the retirement payments you currently receive, or expect to receive in the future…

This year, the Social Security Administration graciously gave seniors a 0.3% Cost of Living Adjustment (or “COLA”). In other words, Retirees who collect monthly Social Security payments, were treated to a miniscule raise to cover higher living expenses.

As you may know, the low adjustment is based primarily on the government’s measures of inflation.

Which are a joke!

You see, the labor department’s “Consumer-Price Index” is designed to measure costs for consumers, and tell us if inflation is rising. A rising CPI indicates that it takes more dollars to pay for goods and services. And if the CPI is steady, it means that prices are not rising and inflation is not a problem.

Of course, like most statistics, the CPI can be manipulated to tell you whatever you want to hear. And in this case, the government wants you to hear that inflation is tame.

In short, the Cost of Living Adjustment calculation makes a mockery out of the U.S. program that is supposed to provide retirement income for U.S. workers.

But here are a couple key points you might not realize…

The “core inflation” reading strips out important costs such as food and energy. So if gasoline prices rise, or if it costs you twice as much to buy groceries as it did a few years ago, that doesn’t matter. These costs are considered too “volatile” and so they’re excluded from the calculations.

(Last time I checked, all of us still have to pay for gasoline, and we still had to eat. So why does it make sense to exclude these prices from inflation readings just because they’re “volatile”?)

On the other hand, inflation for expenses like medical costs and rent rates are moving sharply higher.

You may think that higher rental expenses won’t matter much to seniors. After all, you’d expect many retirees to own their homes outright with little or no mortgage expense.

But the baby boomer generation still has plenty of debt (a material amount tied to real estate). Plus, even for retirees who own their homes outright, rising real estate prices helps to drive property taxes higher.

While I don’t expect the government to change their methods for measuring inflation anytime soon, that doesn’t mean you can’t fight back.

You probably already suspect this. I’m just reiterating how important it is to have a backup plan.

So what can you do to protect your standard of living during retirement?

I believe the best way to protect and grow your retirement wealth is to invest in a handful of alternative opportunities.

These opportunities can lead to reliable income payments that are much larger than what you could expect from Social Security or your corporate pension plan. And these opportunities give you control of your financial future.

But by taking responsibility for your own retirement and taking advantage of some nontraditional investment opportunities, you can secure a reliable and fulfilling retirement.