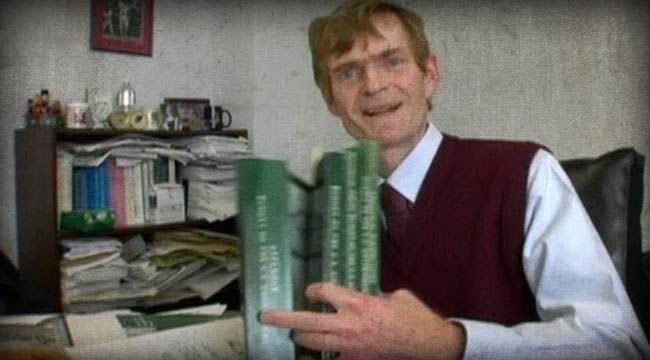 Treasury Secretary Paul O’Neill refused to compromise with then Vice President Dick Cheney when it came to making decisions that he knew would affect not only Americans today, but also future generations.

David Walker and the Fiscal Wake-Up Tour participants had a similar goal. By warning Americans about what was ahead for their country if action wasnt taken, and educating them on the fiscal problems the United States has, they hoped to empower the average citizen to become involved in insisting that changes are made. And from what we saw, the attendees at the town hall meetings they were hosting were ready for a change.

By the time we joined them at a town hall meeting in Los Angeles, after 18 months of intermittent filming, the Fiscal Wake-Up Tour had visited 23 cities.

“It’s a lot of fun being able to get out and meet people,” said David Walker. “It gives you a lot of energy and it gives you a lot of hope. When you state the facts and speak the truth to the American people, they get it and they’re ahead of their elected officials. We can’t borrow our way out of this problem. Anyone who tells you we can does not study economic history and is probably not very good at math.”

“Here’s the thing about the future,” chimed in Robert Bixby, editorial director of the Concord Coalition. “If you knew that a levee was unsound and you knew people were moving into the area and you knew they were at risk, would you stand by and do nothing and say nothing about it? Of course not — that would be irresponsible.

Indeed, Washington is “badly broken,” as David often says in his presentations at the town hall meetings and in interviews. Americans can’t continue to rely on their government to make the tough choices that are needed to restore the U.S. economy.

When many Americans think of debt and deficits, their knee-jerk reaction is to blame it on the war in Iraq or on defense spending. Some people think that we can solve the country’s financial problems by stopping fraud, waste and abuse or by canceling the Bush tax cuts. The truth is, the United States could do all of these things and still would not come close to solving the nation’s fiscal challenges.

The United States already has $11 trillion in fiscal liabilities, including public debt. To this amount, add the current unfunded obligations for Social Security benefits of about $7 trillion. Then add Medicare’s unfunded promise: $34 trillion, of which about $26 trillion relates to Medicare parts A and B, and about $8 trillion relates to Medicare D, the new prescription drug benefit which some claimed would save money in overall Medicare costs. Add another trillion in miscellaneous items and you get $53 trillion. The United States would need $53 trillion invested today, which is about $175,000 per person, to deliver on the government’s obligations and promises. How much of this $53 trillion do we have? Nada.

[Ed Note. Update on Unfunded Liabilities: Since the release of I.O.U.S.A. back in 2008, that $53 trillion figure has ballooned to roughly $87 trillion… although even that may be a conservative estimate. Laurence Kotlikoff, a well-respected professor of economics at Boston University, looked at the fiscal gap versus the official debt and came up with a slightly different number: $222 trillion. And he’s not alone. Niall Ferguson calculates U.S. unfunded liabilities are even larger, at roughly $238 trillion. Bottom line is it’s a massive amount. And unfortunately, “nada” is still the amount of it we actually have.]

“By the time today’s college graduates are ready to retire 40 years from now,” says David Walker, “the only things our government will be able to pay for are interest on the federal debt and some of the Social Security, Medicare and Medicaid benefits. All other parts of the federal government will be closed and out of business!”

As far as taxes go, the United States would have to raise income tax rates across the board by about 2.5 times today’s levels to close the financing gap — and some politicians complain when there is any talk of tax increases. Americans are facing a 150% increase in federal taxes if they continue down this road. By the year 2048, the United States’ debt-to-GDP ratio will be over 400%, more than two times the debt levels we hit at the height of World War II. Good luck trying to get any country to lend the United States money then. No matter which way you slice it, whether you are a Democrat or Republican, the magnitude of this fiscal challenge is much larger than most realize.

[Again. Update on Closing the Gap: If you assume the Kotlikoff’s $222 trillion figure, you would need an immediate and permanent tax increase of 64% — or a cut of projected government outlays across the board by 35%. If the government waited a decade to take these steps…those numbers would become 70% and 38%, respectively.]

For example, let’s assume that the Bush tax cuts expire at the end of 2010. That would only solve about 10% of the country’s federal financial hole. And what about Iraq? Even if the Iraq War ended in 2009, the ultimate estimated cost over time is less than 3% of our total financial problem.

[Ugh, tedious. Update On Bush Tax Cuts: Raising the rates on those over $400,000 will net $617 billion over 10 years…pretty insignificant] 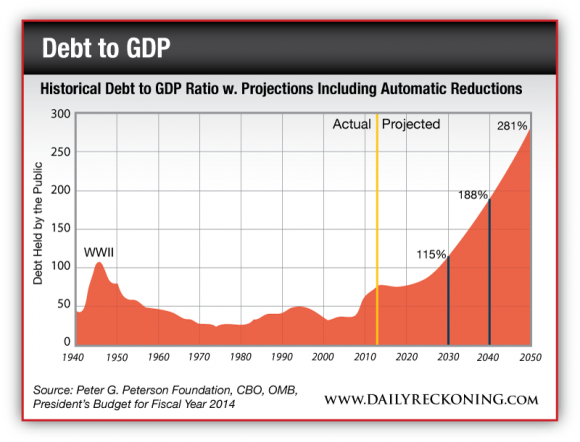 America’s budget, savings, trade and leadership deficits individually are bad enough, but in combination they create a toxic mix that threatens the country’s and each American family’s futures.

”And yet,” says David, ”there is little talk about making these tough choices today. The longer we wait, the harder the choices become. As the baby boomers begin retiring, this tidal wave of spending is about to reach our shores, and we are not prepared for it. And trust me, it could swamp our ship of state.

”Unlike many other problems facing our country, this one is ours alone. We can and we must solve this one.”

The question is: When will we?

Ed. Note: The leadership deficit in the U.S. is only a small part of the larger deficit problem in the U.S. We’ve been discussing many of the other issues facing America all this week in The Daily Reckoning email edition. And likewise, if you haven’t signed up for it, you’re getting only part of the story. Take a moment to sign up for free, right here, and get our full assessment delivered straight to your inbox each day around 4 p.m.