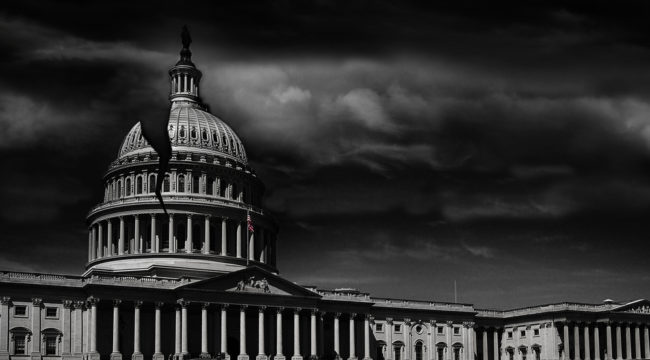 Maybe the Democrats did win the 2016 election. Or at least the the Deep State and its accomplices among the beltway political class, K-Street lobbies and the media did.

That’s because the media won a giant victory against something they deplore and despise more than anything else — the public debt ceiling. They sanctimoniously admonish that it’s a relic of the nation’s fiscally benighted past. They operate on a belief that this is an episodic tendency to threaten America’s credit and to offer Capitol Hill an opening to grandstand about the fiscal verities is a blight on orderly governance.

So the Donald’s latest burst of impetuosity — agreeing with Sen. Schumer to permanently abolish the public debt ceiling — has descended on the beltway like manna from heaven. Not Barack Obama, Bill Clinton, Jimmy Carter or even the Great Texas Porker, Lyndon Johnson, dared to utter the thought of it — at least not in polite company.

Suddenly, and notwithstanding all the good he has done disrupting the status quo, the Donald has become the foremost enemy of America’s very financial survival.

The Federal budget is a Fiscal Doomsday Machine. The depository of American wars and entitlements have run rampant. Under the pile drivers of a global empire and the retiring baby boom, it is rapidly propelling the nation toward fiscal catastrophe. That grim outcome is virtually guaranteed if the only remaining safety brake — the debt ceiling — is summarily abolished.

Due to entitlements, debt service and the slow pipeline of appropriated spending there is no such thing as an annual Federal budget or accountability for how much Uncle Sam spends and borrows. Instead, the $4.1 trillion that Congressional Budget Office (CBO) projects the Federal government will spend in FY 2018, and the $563 billion it will borrow, reflects the dead hand of the past.

Entitlements and other mandatory spending alone is projected to reach $2.566 trillion or 63% of total FY 2018 outlays.

Another $307 billion will be required for interest on the nation’s $20 trillion public debt, while upwards of half the $1.22 trillion for so-called “discretionary” or appropriated programs also reflects funds appropriated years ago.

Altogether, $3.5 trillion, or 85% of outlays, will be essentially baked into the cake before a single Congressional vote is taken on anything regarding the FY 2018 budget.

The Federal spending machine is almost entirely on autopilot and heading for disaster owing to ballooning populations and debt. Ten years from now the combined cost of mandatory programs and debt service will reach $5.12 trillion compared to just $2.87 trillion during FY 2018.

Entitlement spending will be nearly double — even if Congress took a 10-year recess!

As shown below, that means the Federal spending share of GDP is now inexorably climbing toward 30% owing to baby boom retirements, even as revenue under current law is stuck at about 18% of GDP. The CBO’s latest projection of the widening fiscal gap — soon more than 10% of GDP annually — leaves nothing to the imagination.

America really does have in place a Fiscal Doomsday Machine.

The Fiscal Doomsday Gap Is Uncloseable — The Crisis Is Permanent 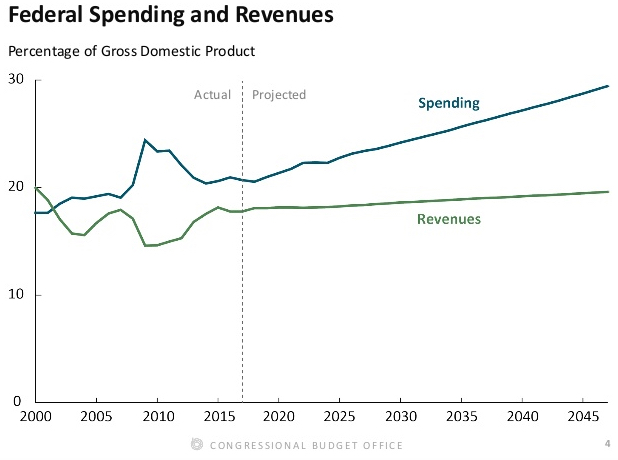 In the chart above, it is easy to see why the beltway argument — that we’ve already spent the money and must liquidate by borrowing whatever it takes — is so thoroughly wrong. The tidal forces driving the budget are so enormous and dangerous that some kind of automatic, institutionalized braking force is absolutely necessary.

The fiscal exigencies of empire, demographics and debt have now become insuperable.

In the case of demographics, it is all right here. The baby boom is retiring at a rate of 10,000 per day, and the wave will not crest until there are nearly 100 million Americans over 65 years of age — double today’s 50 million.

Needless to say, at an average cost of $35,000 per year for retirement pensions and medical care alone, the fiscal math becomes prohibitive.

The voting and political math is downright impossible, and has been that way for the last 34 years.

The last time any significant chunk was taken out of social security or medicare benefits was back in 1983 when the Congress did agree to the Greenspan Commission’s proposal to delay the payment date of the Social Security cost of living allowance (COLA) by the grand sum of 90 days on a one-time basis!

There was one other change, that I was personally involved in, that seals the case. Working with Greenspan we had narrowed the benefit cut options down to a binary choice and presented it to the swing vote on the commission. The latter happened to be 88 year-old Claude Pepper — a left-over from the New Deal era and champion of America’s elderly lobby.

Did he want a reduction in early retirement benefits immediately or an increase in the retirement age starting 30 years hence? Apparently, Senator Pepper concluded he would not live to be 118, and choose the second option!

All of that happened when the over 65 population was about 28 million, not 100 million. 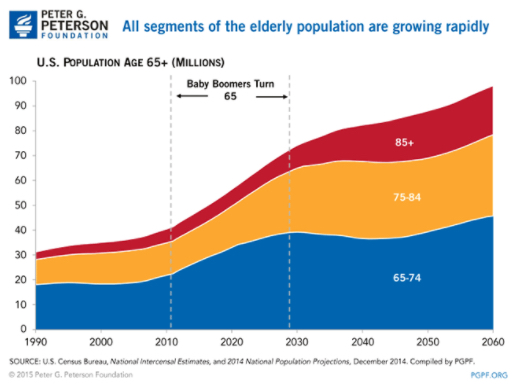 There is no plausible scenario in which Congress will proactively and voluntarily address reform for the ballooning population of elderly Americans. It will only happen when action is forced by the debt ceiling mechanism — the equivalent of a credit card cancellation on a national level.

The recent utter failure to do anything at all about ObamaCare and the underlying health care system that is already consuming 18% of GDP only reinforces the case for a fiscal dues ex machina. As seen below, the cost of the medical entitlements alone relative to national income will double from 5% to 10% over the next three decades. 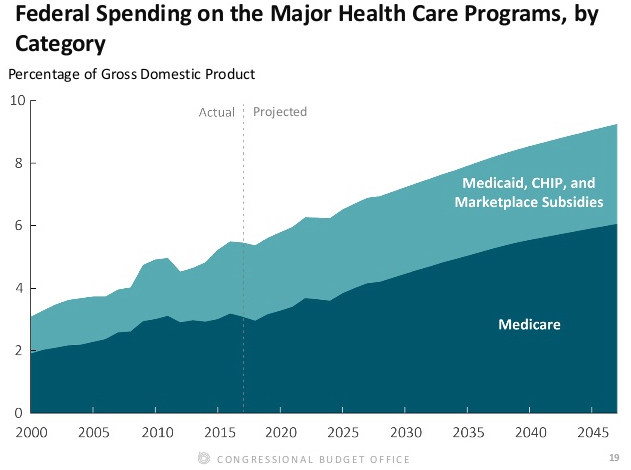 Where that leads, of course, is to fiscal catastrophe.

Without a fiscal braking mechanism that is external to voluntary legislative action, the day of reckoning will be catastrophic.

Even by the CBOs own Rosy Scenario based long-term projections, the nation’s public debt ratio is heading for a Greek-style 150% within the next 25 years, and by our own more sober view of the economic future far worse than that.

When Washington descends into complete fiscal disarray, the meltdown will be on and the grim reaper of recession will be just around the corner.