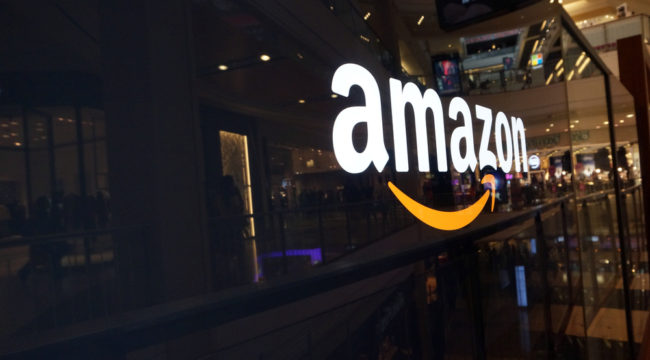 Why Amazon Could Take Over the World

One word symbolizes the power and reach of the behemoth Amazon, explained our Louis Basenese at a recent powwow here in Baltimore:

Louis is one of the world’s premier venture capital analysts. He hunts big-game investment opportunities in the tech space and shares them with his readers.

Louis parachuted in for the day to explain how Amazon is set to dominate, well… the world.

The great majority of customers purchase milk on their adventures in grocery shopping (have you ever wondered why the milk section is located in the very back of the store?).

And shoppers are exquisitely sensitive to its price.

Now Amazon has a war chest crammed with cash, larger than anyone else’s.

That means Amazon can afford to hock milk at a cutthroat price — the competition’s throat.

If customers can buy their milk cheaper from Amazon, they will.

And they’ll end up purchasing the rest of their grocery needs from Amazon too.

So Amazon can afford to sell milk at a loss in exchange for its gaining market share.

With all its cash, Amazon could almost offer milk for free and still come out ahead.

Pretty handsome — unless you’re the competition.

Amazon has already put the brick-and-mortar retail store on the skids.

But Louis explained that it won’t end there…

Amazon is disrupting virtually every industry it touches. And woe betide anyone in its way…

“If your industry hasn’t been disrupted the way retail has, ask yourself how much time it will take,” writes analyst Bruno Aziza in confirmation, before concluding:

Did you know Amazon runs eight lines of fashion apparel?

Or that the hit movie Manchester by the Sea was an Amazon Original Movie… for which it received an Oscar nomination?

NASA and the CIA are just some of the millions of customers who use Amazon’s cloud-computing platform.

There’s even talk of Amazon launching its own virtual currency.

Make no mistake, Jeff Bezos is out for everything in sight — the moon, stars and planets included.

Lest you think we exaggerate…

Blue Origin is capable of manned and robotic missions not only to the moon, where Bezos plans on shipping goods when man establishes a lunar colony… but also to distant planets.

To give some sense of Amazon’s limitless potential…

Many analysts believe Amazon might be the world’s first $1 trillion company.

But Louis estimated that it could be a $3 trillion company perhaps just a decade from now.

Nothing can stand against the Amazon steamroller, said Louis.

But at that point he filed an Amazon-sized caveat…

There exists one force powerful enough to knock Amazon flat, Louis elaborated — and it’s actually the product of the company’s own success.

Perhaps you’re sensing by now what that might be…

Many fear Amazon is using its loaded coffers to corner markets, to extend monopoly power over all it surveys.

Amazon must therefore be broken into smaller components, goes the argument, the way monopoly Standard Oil was broken up in 1911.

Our agents have already caught murmurs of possible action… unconfirmed of course.

Trump has in fact referred to that august daily as the “Amazon Washington Post.”

And one of Trump’s tweets could hold a $64,000 clue into a potential antitrust lawsuit:

Is Fake News Washington Post being used… to keep Politicians from looking into Amazon no-tax monopoly?

“True, The Donald is well on his way toward his last helicopter ride,” David continues.

But he adds, “I’d even bet on Trump launching a major regulatory or antitrust attack on Amazon as he finally goes down in flames. Just the prospect of antitrust legislation could send its stock price plunging.”

Jim Rickards says the odds of the U.S. Department of Justice labeling Amazon a monopoly is “far more likely than 99% of pundits believe.”

That would please Amazon’s competition, sure as sugar.

But given Amazon’s outsized stock market presence, Jim concludes that antitrust legislation “could trigger the most devastating stock crash since 2008.”

Stay tuned, as they say.

The ancient Greeks warned about hubris — “extreme pride or arrogance.”

It referred to someone who had defied his human boundaries… and challenged the gods themselves.

Nemesis — the goddess of divine retribution against those who overstep their human bounds — was dispatched to bring the human usurper under her heel.

We can’t help but wonder…

Could a wrathful Donald Trump turn out to be Jeff Bezos’ Nemesis?