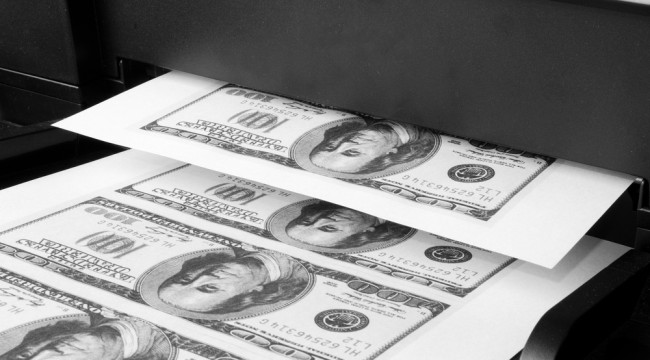 All That Printed Money, So Little To Show For It

MELBOURNE — Not much happened in global stock markets overnight. It’s summer in the northern hemisphere. The money men are at the beach or on their boats. Trading volumes are very light, so there’s not much action.

What else is happening then? Yesterday I told you about Joe Hockey’s peak hubris moment. He thinks Aussie economic growth can get back to 3.25% per annum again.

But Goldman Sachs has a few hard truths for old Joe. From the Financial Review:

‘Iron ore prices may tumble about 30 per cent over the next 18 months as supply expands while steel output falters, according to Goldman Sachs Group, which said the impact on the market from China’s devaluation was a sideshow.’

Such a fall from current levels would bring the price back to US$40/tonne. I think that’s conservative. More than likely, the price will go into the US $30s and stay there for some time.

What will that do for national incomes and economic growth?

There are only two things that produce economic growth. Population growth — because more people produce more things…and productivity growth — an increase in production at a lower cost. Doing things smarter.

Australia has benefited immensely from population growth over the past decade or so. But now, with the mining boom over, the population growth rate will fall. And productivity growth? Well, every lick of capital in this country seems to be going into property. That’s not exactly going to boost long term productivity, is it?

So spruik away Joe, but the reality of the matter is that Australia is in an economic hole of its own making. We’ve deliberately punted on a housing boom to pull us through the mining bust.

‘And theeennn‘. ‘No and then!‘ (From Dude, Where’s My Car, in case you missed the reference.)

But Australia isn’t the only country in economic trouble. In fact, we’re still in the happy denial stage. Japan, for example, is in the cold hard reality stage. As the Wall Street Journal reports:

‘TOKYO—Japan’s economy contracted in the second quarter as overseas demand for Japanese goods slumped and households spent less, raising the possibility the government will act to bolster an anemic recovery.

‘Japan’s gross domestic product shrank 1.6% on an annualized basis in the April-June quarter, according to data released Monday by the Cabinet Office.’

All that money printing and so little to show for it. Why? Because Japan’s population is shrinking. An ageing and shrinking population simply hoards the money you print. Or puts it in the stock market…the only thing doing well in Japan is the Nikkei!

But you know what? Who cares? What will be will be. You can’t do anything about the stupidity of central bankers or politicians. I railed against this stupidity in TheDaily Reckoning but I gave that up long ago in trying to come up with investment ideas for my advisory service.

Moralising about markets and economics is a worthy cause, but it won’t make you money. That’s why I changed my focus last year. I’ve spent the past nine months doing things a bit differently.

The new approach culminated in a new name. Crisis & Opportunity is the successor report to Sound Money. Sound Investments. It’s a much better reflection of the new approach, one that combines traditional value investing principles with technical, or charting analysis.

When I first started Sound Money. Sound Investments in 2010, it was my belief that after the global crisis of 2008/09, the global financial system would be more conservative and operate on at least some sound money principles. As such, I thought you would be able to rely on the principles of value investing to make sound investments.

How wrong I was!

Instead, the financial system has become even more risky. Global debt levels have exploded since 2007…the system needs ongoing debt growth to survive. And debt will keep on growing until the system blows itself up.

When that will happen is anyone’s guess. All I can say, with some degree of confidence, is that the next crisis will be bigger than the last one. It’s a trend that has been going on for decades.

That is, each successive financial crisis has been larger and more complex than the last. It all culminated in the global credit bubble and bust in 2008. But instead of trying to fix the problems that caused the crisis, we ignored them and tried to grow our way out via a massive increase in debt.

That’s why I think the next crisis will be bigger again. In fact, I don’t think the current system of global finance will survive the next one. Momentous change and upheaval will sweep across the world.

But no ones knows when that will happen. More importantly, no one knows HOW it will happen. Do stock prices melt down like they did in 2008, or melt up, as ‘money’ around the world loses its purchasing power?

You may have an opinion, but the truth is no one knows. In a world of constant central bank intervention, absolutely anything can happen.

That’s what I’m prepared for and it’s one of the reasons I decided to tweak the service. So why Crisis & Opportunity?

Well, history shows that the best time to invest (from a long term perspective) is during, or soon after, a crisis. Whether it’s in the depths of the Great Depression, or after the dotcom bust, crises create value in stocks and incredible long term opportunities.

But a major crisis doesn’t come along everyday, or even every few years. You can’t sit around waiting for the next crisis to happen to provide great investment opportunities.

But you don’t need to!

There are crises occurring in the stock market all the time. Companies or whole sectors get into trouble and sometimes fall 50, 60, 70 or even 80% or more from their peak levels.

You don’t need a Great Depression to create incredible investment opportunities. You just have to look closely and you’ll see plenty of individual companies going through their own crisis.

When the market falls 50% or more, you can be pretty sure there’s good value around. When a stock falls by a similar amount, it’s the same story…in many cases there is good value on offer and an opportunity to make an attractive long term return.

This is the sort of situation I like to look for when picking stocks. That is, observe some sort of crisis (whether short and sharp, or one that has played out over years) and then see if it the situation presents a worthwhile investment opportunity.

A crisis creates the opportunity. But it’s not just a matter of buying every down and out company. That’s where the unique investment method comes into play. I call it the ‘fusion method’, and you can read all about it here.

Interest rates might not rise for 20 years?… By one metric, stocks are the most expensive since the dot-com crash….   Conditions are coming into place for an epic crash…