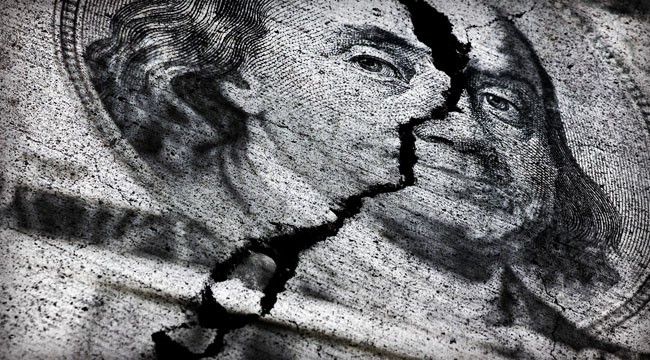 The most important number in last weeks’ Q4 GDP update was 2.3%. That’s the year over year change in real final sales from Q4 2013. As an analytical matter it means that the Great Slog continues with no sign of acceleration whatsoever.

Indeed, the statistical truth of the matter is that this year’s result amounted to a slight deceleration — since the year over year gain in real final sales for Q4 2013 was 2.6%.

The larger point is this: Take out the jerky quarterly impacts of inventory stocking and destocking, and view things on a year over year basis to eliminate seasonal maladjustments and data collection and timing quirks, such as the double digit gain in defense spending during Q3 and the negative rate for Q4, and what you get is a slog since the recession ended in 2009.

The questions thus recurs as to what in the world the Fed’s massive money printing spree had to do with this tepid performance.

The answer is nothing at all, and that “tepid” and “slog” are exactly the right words to characterize these numbers. After all, the plunge in GDP during 2008 and the first half of 2009 was the deepest since WWII. By all prior norms, therefore, the bounce back should have been exceptionally strong.

For instance, real final sales dropped by 3% during the Great Recession — far more than the 1.1% decline during the deepest prior post-war downturn of 1981-1982.

However, during the next five years of rebound, real final sales grew by 26% or nearly 4.7% per year.  That’s more than triple the 8% cumulative rebound from a far deeper hole in June 2009.

So the case for the Fed’s massive money printing campaign has now been flat-out obliterated. As I documented in the Great Deformation, the short but deep recession of 2008-2009 represented a sharp liquidation of excess inventories and labor that had built up in the main street economy during the Greenspan-Bernanke housing and subprime credit bubble. But that one-time liquidation was over by June 2009; the economy was not sinking into a black hole.

Moreover, by the time the US economy began to rebound in mid 2009, the real cause was the natural regenerative power of the capitalist market — not the massive money printing campaign that Bernanke had launched at the time of the Lehman failure in September 2008.

All of the massive liquidity — which took the Fed’s balance sheet from $900 billion to $2.5 trillion in less than a year — worked its magic in the canyons of Wall Street, not in the household and business sectors of the main street economy.

The fact is, the only channel through which the Fed can impact the main street economy is through credit expansion. Yet business and household credit outstanding was still shrinking long after the recession ended.

The 2% slog that began thereafter had nothing to do with the machinations of the Fed; its represented the return of a steady, modest increment of labor hours and productivity growth to the market economy.

But here’s the thing. The five-fold gain in the Fed’s balance sheet since 2009 has not been harmless — even though it has not stimulated the main street economy.  What is has done, obviously, is reflate a massive financial bubble.

The latter will splatter eventually, sending the main street economy into a new tailspin of short-term labor and inventory liquidation and another financial crisis for no reason whatsoever.

Indeed, the monetary politburo is stuck in a dangerous time warp. Not recognizing that the credit channel of monetary transmission is broken and done, they keep money market rates pinned to the zero bound because they claim to detect no acceleration of consumer price inflation on the immediate horizon.

So what! Do not these clueless Keynesian apparatchiks recognize that the  money market rate and the yield curve are the most important prices in all of capitalism, and that their policy of massive and continuous financial repression generates blatantly false prices in the financial markets and therefore rampant speculation and asset price inflation?

Needless to say, another quarter of no “escape velocity” on main street and a further round of Kool Aid drinker speculation on Wall Street takes us just that much closer to the brink. Yet the Fed remains oblivious and continues to manufacture excuses and equivocations as to why ZIRP should extend into its 80th month and beyond.

This is mis-governance on a colossal scale. So when the next thundering crash occurs — it is devoutly to be hoped that “audit the Fed” turns out to be the least of the threats descending on the Eccles Building.

P.S. For more articles from David Stockman, be sure to sign up for our FREE email edition of The Daily Reckoning. What you find here on the site is only a fraction of the wealth of information you could be receiving. Sign up today to see what you’ve been missing.