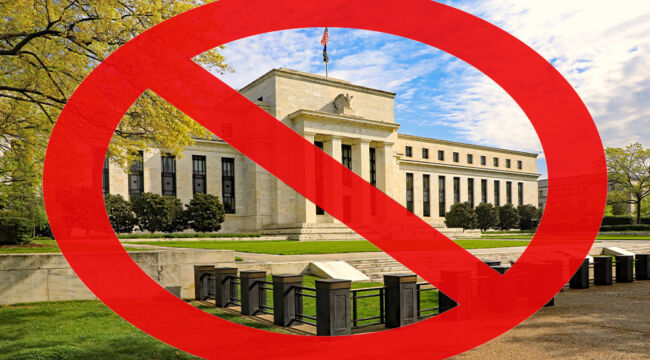 A World Without the Fed

WHAT would happen if the Federal Reserve ceased to exist? We all know the answer: global markets would instantly collapse. And the global financial system, now entirely dependent on Fed stimulus, intervention, manipulation, free money for financiers and endless printing of trillions of dollars out of thin air, would crash, leaving nothing but a steaming, fetid pile of corruption infested by the cockroaches scurrying around gobbling up the few crumbs left.

What would happen if the Federal Reserve ceased to exist? The Treasury would sell its bonds on the open market, where buyers and sellers would set the yield on the bonds. Private banks would take deposits and lend money at rates set by supply and demand.

We all know what would happen: yields and interest rates would explode higher in response to risk having to be priced in and every flimsy, worm-eaten enterprise that depended on zero-interest rates would collapse in a heap. Every putrid, staggering zombie corporation would crumble to dust, and its phantom assets, illusions generated solely by the artificial spew of the Fed, would fall to their real value, i.e. near zero.

Let’s modify the question slightly: what would happen if the Fed’s policies stopped working? In other words, what if the Fed’s spew no longer created the illusion of risk-free gambling in bubble-valuation assets? What if risk raised its Gorgon-like head despite every intervention, every manipulation, and every foul burp of propaganda from the Fed?

The faith in the Fed’s omnipotence that magically reduces the perception of risk to zero is ultimately a faith in incremental change: the Fed tweaks the dials of bond purchases and its spew of free money for financiers, and voila, risk is banished and risk assets get another rocket booster.

Alas, risk cannot be banished, it can only be transferred to others. The Fed’s endless spew and its constant tinkering with incremental adjustments have created a delusional faith that these tweaks will work forever and ever.

Put another way, there’s no closets left to hide the risk in. Now the risk will escape the Fed’s rusting, hubris-soaked chains and decimate the financial sector, which is now the dominant force in the economy.

Once the delusions of no-risk gambling and phantom valuations implode, the real economy with undergo a devastating cold turkey withdrawal from the Fed’s malevolent spew of free money for financiers masquerading as “stimulus.”

Extremes get more extreme until risk breaks out; then the reversal will be as extreme as the bubble expansion. Delusions, illusions, phantoms of value: these are not real. Want to know what’s real? Risk.

The absolutely last thing anyone expects is a collapse of all the asset bubbles, i.e. a deflation of assets that reverses the full 20 years of bubble-utopia since 2000. The consensus is universal: assets will continue to lift ever higher, forever and ever, because the Fed has our back, i.e. central banks will create trillions out of thin air without any consequence other than assets lofting ever higher.

“Measured by deviations in a benchmark economic statistic, the real natural rate of interest, these responses indicate that pandemics are followed by sustained periods — over multiple decades — with depressed investment opportunities, possibly due to excess capital per unit of surviving labor, and/or heightened desires to save, possibly due to an increase in precautionary saving or a rebuilding of depleted wealth. Either way, if the trends play out similarly in the wake of COVID-19 then the global economic trajectory will be very different than was expected only a few months ago.”

Allow me to translate: wars launch 20-year booms of rebuilding, pandemics launch 20 years of deflation. Oops! Not only do wars destroy physical assets that must be rebuilt, they also tend to kill off a consequential percentage of the labor force, generating a labor shortage that pushes up wages.

So capital wins funding the rebuilding and labor wins because workers are scarce and in demand: win-win baby! Pandemics are considerably less warm and fuzzy, especially Covid-19. Pandemics are like neutron bombs, they leave the built environment intact so there’s no impetus to invest.

Unlike the Black Death that decimated the human workforce from China to Europe in the 1350s, Covid disproportionately takes the lives of the elderly, most of whom have already left the workforce. So the Covid pandemic’s reduction of the workforce is too modest in scale to create labor scarcities consequential enough to push wages higher.

In other words, lose-lose: capital earns low returns in a low-demand environment and labors’ wages stagnate in this low-demand economy.

Cue 20 years of asset deflation. Bu-bu-but the Fed is omnipotent, godlike in its powers! The Fed can push stocks to the moon, never mind history, fundamentals or reality!

Yes, well, um, fantasies are nice, and delusions are fun, but reality inevitably intrudes and diminishing returns on the Fed’s neo-feudalist feast for the super-wealthy are about to grab markets by the throat, regardless of what the Fed bleats.

There are a couple of funny little things called reversion to the mean, bubble-symmetry and non-linear dynamics that the Fed doesn’t actually control (gasp!) because they are not fully controllable by human policies. Statistical outliers/extremes have a strong propensity to reverse, regardless of human manipulation.

And these reversals are not “buy the dip” wiggles; they completely reverse the entire bubblicious move to the stars via bubble-symmetry: so markets that go from 1,000 to 30,000 retrace all the way back down to 1,000, no matter how many humans shout, scream, plead and whine “that’s not possible!”

Oh yes it is. Hubris weighs heavily on our faith in the “right” human policies to work magic forever and ever. So as long as the Fed follows the “right policy” and continues printing trillions of dollars out of thin air and buying bonds (and whatever else needs to be bought up to lift markets higher) then Dow 100,000 is in the bag.

Or not. The idea that human don’t control everything is anathema to a technocrat elite, and so when the inevitable reversal crashes assets, everyone will rush around looking for the human-action cause of the disaster and the human-action fix, so we can get back on track to Dow 100,000.

The Pendulum Has Swung Too Far

But the search for causes will be in vain, for extremes pendulum swings reach a limit and then swing back, eventually reaching the opposite extreme minus a bit of friction, which is minimal in a frictionless financial sector of printing trillions with keystrokes.

If you want evidence that the pendulum has swung as far as it can go, consider that billionaires have gained $1 trillion since the pandemic started.

Can 20 years of asset deflation be compressed into a mere two years? Absolutely. The global financial system has been running a 20-year experiment in extremes that’s close to producing interesting results.

Extremes become more extreme right up until they reverse, a reversal no one believes possible here in the waning days of 2020. If we could measure hubris, it would be near-infinite. And the reversal of that near-infinite extreme will be one for the ages.