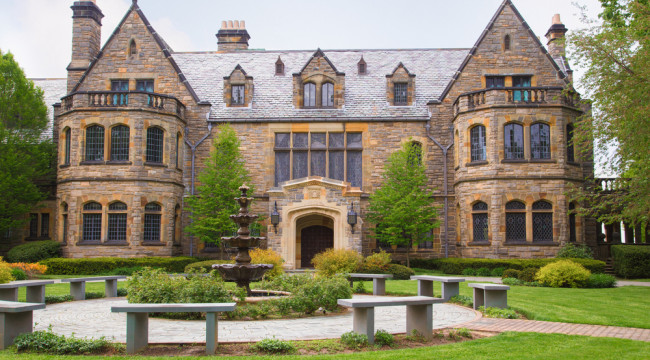 A Visit To The Most Expensive House In America

BALTIMORE, Maryland – Today, a first-hand account of a visit to America’s most expensive private house… and what it tells us about our nation’s fictitious economy.

But first, a headline from Bloomberg yesterday:

The Dow fell 358 points – a 2% drop. The Nikkei and the Shanghai Composite fell, too (and tumbled badly again this morning). Gold climbed to a six-and-a-half-week high.

What puzzles us is not why stocks are going down but why anyone thought they were worth so much in the first place.

The defining feature of modern public life is that no one knows what anything is worth… and almost everything reported is a fraud.

Markets, elections, the economy, even our wars – all are rigged… none are what they appear to be.

We’ve been describing how and why the feds and the cronies in America’s C-suites have been jacking up stock prices.

But it’s not just stock prices that are rigged; it’s the whole damned system.

Almost no one realizes it. Because almost everything we hear comes from the riggers. It’s a Great Zombie War; most of the “information,” “statistics,” and “opinions” you read are nothing more than propaganda.

The popular narrative is that the U.S. economy grew strongly in the 1990s and up to 2007. Then capitalism hit a crisis, caused by too much greed and too little regulation. Thank God the feds were on the job, or we would have had another Great Depression!

Simple. Easy to remember. But every element of it is a lie.

First, the economy was already scammy and unproductive in the 1990s.

In 2007, it wasn’t greedy capitalism that went into crisis; it was greedy cronyism.

Finally, it wasn’t the feds who saved the situation. They made it worse. Too much debt caused the 2008 global financial crisis; the feds gave us more.

It’s hard to know what is going on because the feds weigh up the situation and report the essential numbers. Trouble is, like a crooked butcher, they put their fat thumbs on the scale to make it look as though there’s more meat.

For instance, GDP is an entirely useless measure…

Here’s an illustration: A while back, we went to visit a piece of real estate in Florida.

At the time, it was the most expensive house ever offered for sale in the U.S. – a concrete monstrosity on the market at $139 million.

And because of that, the sales agents required a complete financial disclosure before they’d give you a tour. Fair enough. They wanted to be sure they weren’t wasting their time. And they probably also wanted to be sure we weren’t casing the joint.

In any case, we weren’t about to give them our financial details. So, we contented ourselves with a look from the outside, which satisfied us completely.

The place was so remarkably ugly… so tasteless and gaudy… and so expensive to operate, we wouldn’t take it if it were given to us for free.

That was last year. Apparently there has been some slack in the sales process. Recently, the sellers called us back. No need for financial disclosures now!

Our colleague saw the inside this week. He reports:

I’ve never seen this much gold leaf in my life… and that includes visits to the White House, the Louvre, and the home of a Persian businessman in Los Angeles combined.

The palace is truly incredible… and the realtor is convinced you’ll love it. I assured him you’d like the excessive gold leafing.

It’s still in progress. Gold flakes are everywhere. On the floor, inside open outlet boxes, and even in the two-inch-thick Kevlar lining that enshrouds the ladies’ walk-in closet in the master suite. (It doubles as a bulletproof panic room for the family.)

There’s an 18-seat IMAX theater… a 30-car garage… a suspended Jacuzzi lined with glass… even an LED-lit water slide down to the pool.

All of this is enshrouded in enough concrete to rebuild a small city. And all of that concrete is completely lined with soundproof rubber… it’s totally silent inside.

We also discovered who the owner of the home is. [We won’t embarrass him by revealing his name.] He owns a development company. He has building, paving, and other interests there and in Orlando. He also gave $245,000 to the underdog candidate for Broward County Sheriff in 2012. And he won.

Before you reach for your pen and write a deposit check, consider that the palace was conceived nine years ago – the exact peak of the last housing bubble.

It will be finished by Thanksgiving… arguably the exact top of another bubble in housing.

Why bring up the posh pad in Pompano?

Because it was built – like much of the U.S. over the last 20 years – on false pretenses. And all that cement, gold leaf, and workmanship was included in U.S. GDP figures.

Most likely, they would never have been put to use had the feds allowed the market to set interest rates rather than having the Fed artificially fix them at or close to zero.

And this fiction contributed to another big fiction – widely distributed in the mainstream media – that the economy was “recovering.”

But building Cyclopean palaces does not necessarily add to the nation’s wealth. Sometimes it subtracts from it. It depends on whether the finished product is worth more, or less, than the value of the resources that went into it.

Too many dot-coms… too many cheap houses and subprime-backed mortgage bonds… too many frackers in the Midwest… too many factories in China… too many shopping malls in America – wherever and whenever it occurs, cheap money causes people to overdo it.

GDP figures are supposed to measure at what pace the economy is growing. But as the feds calculate them, they tell more lies than a presidential hopeful.

It looks good, but only as long as the zombies are winning… interest rates remain ultra-low… and nobody notices that the whole thing is a bamboozle.