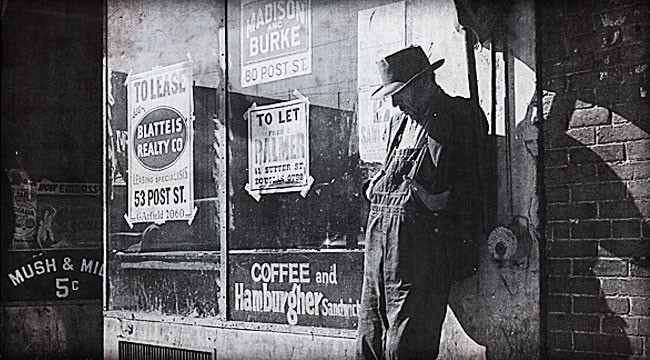 For his U.S. economic history class at UNLV, Murray Rothbard gave us the assignment to write a 10-page paper. The paper could be on anything we wanted it to be. However, we had to clear the topic with him.

When I proposed writing about the Great Depression, Murray was thrilled and rattled off a number of sources. Near the top of his list was a book he described as “fantastic, except it has a terrible title.”

That book was a Laissez Faire Club featured selection — Economics and the Public Welfare: A Financial and Economic History of the United States, 1914-1946 by Benjamin M. Anderson. As you can imagine, this is a book I have very fond memories of. My copy still has paper clips marking several pages. The text is underlined throughout.

Anderson was one of the first economists to provide a systematic account of the causes of the Great Depression. It remains the most reliable documentary guide to precisely what happened, before, during, and after. That is the essence of this book.

Anderson had feet both in academia and banking. He was on the faculty at Columbia and later at Harvard, and then joined National Bank of Commerce in 1918. Two years later, he moved to Chase National Bank to serve as economist and editor of the Chase Economic Bulletin.

He was also a world-class chess player and wrote what’s been described as a brilliant preface to Jose Capablanca’s book A Primer of Chess. Sadly, Anderson never saw Economics and the Public Welfare in print. He died of a heart attack just prior to its publication.

The years between the forming of the Federal Reserve and the end of World War II are some of the most interesting and formative years in U.S. economic history. Of course, the common narrative we constantly hear is the “monetarist” version parroted by Ben Bernanke that the central bank erred on the side of tightness and the money supply plunged, lengthening the Great Depression, and it was ultimately only fixed with a massive government works program known as WWII.

Instead, imagine having a correspondent on the ground keeping a rich, informed diary of the day-to-day, week-to-week, and year-to-year events as seen through the eyes of an Austrian economist, from the creation of the Federal Reserve through the Great Depression to Bretton Woods. That is what Economics and the Public Welfare is.

Anderson provides some theory along the way, but what this great book primarily does is chronicle monetary and economic events from the beginning of the Fed’s operation to after the war. Politics, stock prices, and banking and trade data, plus a fast-paced narrative combine to make the reader feel like he or she is there.

As you would expect a bank economist would, Anderson provides a blizzard of numbers to provide emphasis for his story.

For instance, Anderson provides the principal resource and liability items of the Federal Reserve during the war. Total resources ballooned from $637 million in 1915 to $5.2 billion in 1918. On the liabilities side, Federal Reserve notes in circulation exploded as well, from $165 million to $2.5 billion, as did member banks’ reserve deposits, which increased from $398 million to $1.7 billion.

As measured by percentage growth, this is greater balance sheet growth than the Bernanke Fed post ’08 crash. Seeing these astonishing numbers triggers a realization: The years from 2008-13 amount to our own World War I. One hundred years ago, this sort of thing led to the post-boom crash of 1920 and unleashed the distortions of the roaring ’20s that led to the second major crash of 1929.

Back in these days, the banking system also found itself flush with reserves. With bank reserves held at the Fed and not being lent out, the money market tightened and rates increased, despite bank credit expanding. After dropping to 1% in 1915, the bank call rate rose sharply to 7% in 1917. Bond yields also went up. “The pressure of firm money rates undoubtedly did a great deal to retard bank expansion and to hold it down to necessary things,” Anderson wrote.

Of course, in similar fashion, bank reserves are also piling up at today’s Fed, and money is, indeed, tight for the average person. Even so, the Fed of those days was not nearly as reckless as ours is today. The Bernanke Fed works overtime to keep money tight but rates uber-low in aid of the government, big banks, and speculators on Wall Street.

If you haven’t ever heard of Benjamin Anderson and wonder about his hard money, anti-Keynesian bona fides (after all, he did work for a bank), this quote from Chapter 1 gives you an idea:

“The very inelasticity of our prewar (World War I) system made it safer than the extreme ductility of mismanaged credit under the Federal Reserve System in the period since early 1924. The whole world was, moreover, far safer financially when each of the main countries stood on its own feet and carried its own gold.”

More than once, the reader will stumble upon a sentence that will make him smile. What’s old is new again. We’ve taken note that Iowa farmland is looking bubblelike in 2012 and 2013. Sure enough, in his chapter on the 1920-21 crisis (what, you’ve never heard of that one?), Anderson offers a small section “Land Speculation — Iowa.”

In a footnote, the author remembers what an Iowa City banker told him. “I know that you economists say that land is only worth what it will produce, but it does look like some of this land around here is worth a thousand dollars an acre.”

Not so famously, the government didn’t intervene in those unenlightened dark ages. Wages and wholesale price levels crashed. The result, says Anderson: “In 1920-21, we took our losses, we readjusted our financial structure, we endured our depression, and in August 1921, we started up again. By the spring of 1923, we had reached new highs in industrial production and we had labor shortages in many lines.”

The chapter I have bookmarked with the most passages highlighted is “Digression on Keynes.” For nearly 20 pages, Anderson takes on Lord Keynes, whom he describes as “a dangerously unsound thinker.” Anderson points out that Keynes heavily influenced Roosevelt and all economists who worked for the government. In The General Theory, Keynes targets a passage from J.S. Mill out of context to challenge the idea that aggregate supply and aggregate demand grow together.

“Where economists generally have held that saving and avoiding unnecessary debt and paying off debt where possible are good things, Keynes holds that they are bad things. He disparages depreciation reserves for business corporations. He disparages amortization of public debt by municipalities. He disparages additions to corporate surpluses out of earnings.”

There are entire books devoted to challenging Lord Keynes and The General Theory. But, Anderson’s short chapter will provide you all the ammunition you need.

Near the end, the author reprints a memo he penned for private circulation that eventually found its way throughout government. The contents of the memo are considerable. However, one small snippet speaks to current Fed policy:

“Inflation is not something that you can turn off and on like water at a faucet. Inflation and deflation are not simple terms and they are not simple opposites. There is no financial Westinghouse air brake by means of which an inflationary movement can be tapered off and brought gently to an end without shock. Rather, inflationary forces engendered in defiance of sound financial policy may seem harmless for a long time and then suddenly break force into great violence.”

There is an enormous amount of wisdom in this book. Everyone trying to understand monetary and economic policy during the Depression or today and the subsequent effects should have Economics and the Public Welfare loaded and ready to read cover to cover, or to refer to often. Anderson is an indispensable guide to government monetary policy, as it happened, that still haunts us today.

Being the kind of guy he was, Rothbard recommended Anderson’s great book before recommending his own America’s Great Depression. Both are amazing. But Murray had the benefit of Anderson’s work in writing his. He cites him no fewer than 15 times.

Ed. Note: Readers of TheDaily Reckoning email edition had an opportunity to gain unfettered access to Economics and the Public Welfare, along with a host of other books from our Laissez Faire Club.

That access came with a steep discount. Make sure you don’t miss out on this, and many other offers just like it, but signing up for The Daily Reckoning email, right here. It is completely free, and is delivered straight to your email inbox, each day around 4 p.m. Don’t wait. Get today’s issue before it arrives. Click here to learn how.