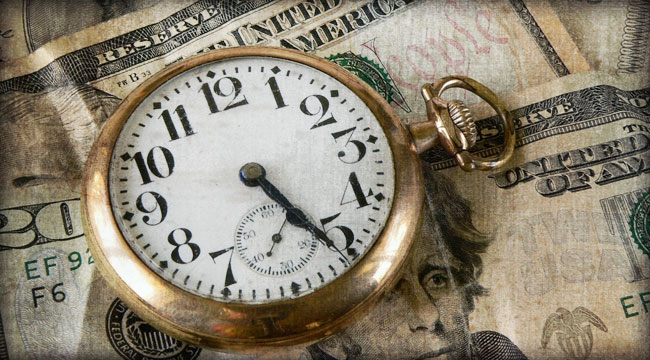 A New Level of Absurdity...

The reality, we’ve seen, is that in 2014, we remain mired in the weakest recovery since the Great Depression.

But Wall Street’s fast-money crowd persists in ignoring or outright abusing the data — a symptom of what Dr. Kurt Richebächer called Late Degenerate Capitalism. That’s when a capitalist economy is taken over by the financial markets. Economists no longer regard economic data as a measure of the health and wealth of the nation but for what impact they might have on the financial markets.

In 2013, Late Degenerate Capitalism reached a new level of absurdity. If an economic number came in worse than expected, it was great news for the markets, because it meant the Federal Reserve would keep pumping money.

More than seven years later, Americans are still getting poorer…

One more thing has not changed since Dr. Richebächer’s death in 2007 — the pervasive notion that consumer spending is what makes America — indeed any nation — prosperous.

Dr. Richebächer knew that healthy economies grow when consumption is fueled by production. Unhealthy ones, by contrast, inflate asset prices… to be used as collateral… to accumulate debt… to use for consumption. We both know that describes the U.S. economy. All the while, the average American consumer is becoming poorer.

“Ja, the CPI numbers are coming out!” we recall the good doctor saying as he checked his watch.

It was a midafternoon in 2006 in Cannes, where we’d joined him at his apartment to collaborate on a book project that, unfortunately, failed to come together before his death a year later.

He grabbed his cane and moved to a comfy chair and clicked on a widescreen TV. Bloomberg. In German. The numbers had been published: 2.7% core… 4.1% overall. Traders love the report; stock futures back in New York had already begun to rally. Kurt, on the other hand, was flabbergasted. He started talking to me and to the television in German.

Of course, the consumer price index understates the cost of living. But that’s old hat. We proceeded to have a little fun with the numbers, Richebächer-style.

In the first half of 2006, Americans, on aggregate, were growing poorer at nearly 4% a year. We’re going to call this the Real-Life Prosperity Equation. Clearly, it spelled trouble in early 2006.

And now? The final figures for the second half of 2013 aren’t in yet… but we have everything up through November. Close enough to run the numbers. Personal incomes rose 1.1%. But personal spending grew faster, up 1.7%. And core CPI stands at 1.7%.

More than seven years later, Americans are still getting poorer, albeit at a slower pace — 2.3% a year. No, dear reader… after a week of reckoning with Kurt, we can’t say that he would be surprised if he were still here with us.

His prescient warnings, proven true today, have opened our own eyes and filled us with a healthy skepticism about this bubble economy’s “recovery”…

Ed. Note: Today’s email edition of The Daily Reckoning gave readers a bit of extra insight from Dr. Kurt Richebächer himself. In fact, all week long Addison has been channeling Dr. Richebächer and how he might respond to the current economic situation the U.S. now finds itself. Not only has it been insightful, it’s been educational and possibly very lucrative for those readers who payed close attention. If you’re not getting The Daily Reckoning email edition, you’re missing out on all the fun. Sign up for FREE, right here, to make sure that never happens again.