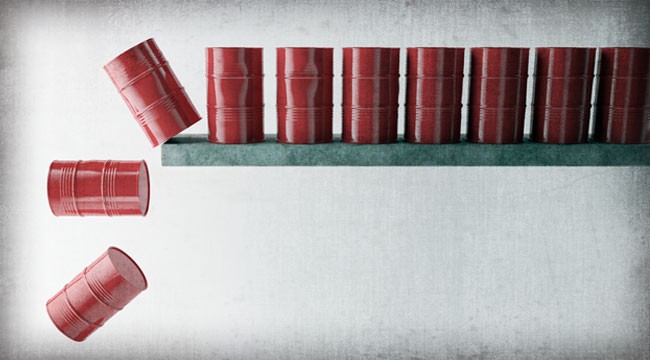 A New Equilibrium for Oil Prices

I just got back from Denver, CO and I’ve got plenty to share with you.

I was in town for a big shale convention, focused on the Bakken and Niobrara shale plays out west. The “who’s who” of the west were there – including Hess, Whiting Petroleum, Oasis Petroleum and Synergy Resources.

I spoke with several of the key players and today I want to give you a behind the scenes look at what they’re saying in the face of low oil prices – plus, a look at my biggest takeaway.

In fact, let’s cut to the chase, my big takeaway is that oil prices are going to be lower than we thought for longer.

One of the key points to my thesis came from a question I asked Oasis Petroleum’s President, Taylor Reid. You see, Oasis, much like many other shale players are looking to hedge or sell forward, their future production.

One of the biggest saving graces for the shale industry is the fact that shale players hedged production prior to oil’s big drop. Indeed, with prices hovering around $50 today many producers are still benefiting from hedges that allow them to sell barrels at $20, $30 even $40 dollars higher than today’s price.

Well, according to Reid, Oasis is looking to hedge its future production (to some extent.) But when I asked at what price he’d be happy to lock-in, his first response was that Oasis is “not ready to say.” However, subsequent answers followed where Reid said $80-90 is where they “used” to hedge. Today they’d likely be happy hedging around $70 and that even $60 “is helpful.”

Why was the company exec so coy about this pretty straight-forward concept?

Well, for starters Oasis isn’t the only shale player that wants to hedge. So there’s certainly some strategy to laying out a hedge plan and keeping that information close to the chest to stay ahead of competitors.

But it’s not his exact answer that matters. This example gives us an important look behind the scenes in America’s shale patch. Whenever the price of oil starts to creep above the $60 mark (which may be soon), I bet we’re going to see continued pressure on prices. That’s because as soon as the price gets reasonably “helpful”, shale companies will be clamoring to sell their production forward. And when they sell, oil prices will feel the pressure.

The cost to produce oil, across the board, is dropping.

Sure, for years we’ve known that savvy producers are getting better and more efficient at producing tight oil in the U.S. — that’s a trend that certainly hasn’t slowed. Today there’s even more reason for producers to rally efficiencies, drill the “sweet spots” and in general produce more oil at a lower cost.

However, there’s another factor in today’s market that’s lowering the breakeven price.

With a massive pullback in capital spending and a drop in the overall rig count, the cost for services is dropping rapidly.

According to Jeff Knupp, a Director at Tudor Pickering Holt & Co, a 10% reduction in service costs can lead to a $3-6 drop in the breakeven price for producers. Knupp commented further saying breakeven prices are likely $15-20 lower than they were just a few months ago.

Soooooo, if you catch the drift, you’ll see that prices are lower for a reason.

Now, before we break for a holiday weekend, let’s make sure we’re on the same page.

I’m not saying that oil prices won’t go up from their current perch of $50/barrel. But, there’s growing reason to believe that prices could stay stubbornly low for a lot longer than we’ve thought.

Add it all up and what we’re seeing today is a re-writing of the new equilibrium for oil prices. This is uncharted territory – and we’ve got a front row seat.

I’m not going to speculate a guess as to what price will shake out when the dust settles.

Eh, nevermind I will…

Using some ballpark numbers I think most shale oil plays across the country are going to cost approximately $6.5 million to drill, plus say, $20 per barrel to operate (this includes overhead, transportation, etc.) And on average I believe they’ll produce some 400,000 barrels over the life of the well.

Simply put, on average, I believe well-run shale players with good acreage, or “good rocks” as they say, can produce oil at $36.25 a barrel.

That also jives with what I heard from Hess Oil’s President, Greg Hill. “We’re good down to $40 WTI” Hill says.

No. This doesn’t mean the price of oil is going to shake out to be $36 a barrel or even $40 a barrel. There will certainly be a premium based on what rate of return oil producers want to make on a yearly basis. But we can assume they can still turn a nice return at $50-$60 per barrel.

Remember, no one knows where oil prices will shake out. America’s shale boom is a game-changer. And it’s changing the world price of oil in front of our eyes.