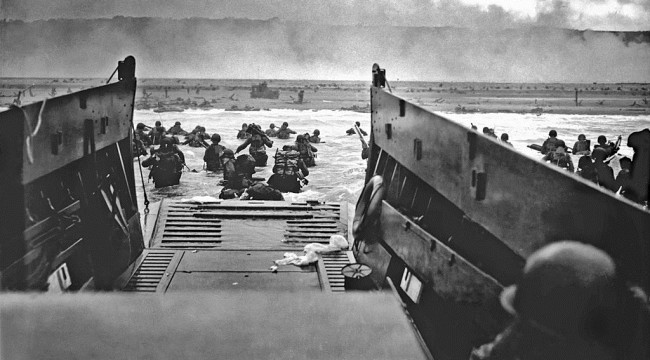 [Note, this is a “Daily Reckoning Classique” written by Bill Bonner during his visit to Omaha Beach in April 2000]

I thought of the famous painting by Norman Rockwell. A deeply furrowed and weathered farmer from out on the plains sits on the runner of his pickup truck, while his son awaits the train. The son is going off to college and is full of the bright expectations of youth. The father is more concerned with how he will get the next crop in without his son’s help. The picture appeared to be from the late ’30s.

There, in section D of the American cemetery, on the bluff overlooking the English Channel, was the simple cross that marked the grave of Nils Wennberg, private first class, from South Dakota. Is that what happened to the boy? I wondered.

As Hitler remarked, “The God of War has gone over to the other side.”

The 6th and 7th of June, 1944, were black days for the Nindel family of Indiana. The crosses at Omaha Beach record that two Nindel boys, Preston and Robert, died within 24 hours of each other on those two days – two of the nearly 10,000 American casualties.

Also of interest was the grave of Jimmie Montcrieth – whose heroism on the 6th of June was so remarkable that he was awarded a Medal of Honor – posthumously. Montcrieth ran from position to position, exposing himself to enemy fire, rallying his troops and managing somehow to advance against the German bunkers. He was killed – but the bunkers were taken.

“All I remember,” said Stanley, a stout oysterman and carpenter, and D-Day veteran, whom I worked with back in the ’60s, “was jumping in the water and running up to the beach. I had never been shot at before. I didn’t care for it. Guys were getting shot all around me. And I had so much sh…[gear] hanging off me, I could barely move. But I made it to the beach and crouched behind the dunes and started shooting back. I didn’t know what I was shooting at. But I hoped to hell I hit some son of a bitch in a German uniform.”

“Stanley,” I once asked during the terminal phase of the Vietnam War…when the draft lottery numbers were being handed out, “couldn’t you have gotten out of it? Didn’t you have polio or something?” Stanley had had polio as a child and walked with a limp.

“Hell no. I didn’t tell them about the polio. Besides I didn’t want to be sitting around here with my thumbs up my [bleep] while everybody else was getting their [themselves] shot up. Of course, it was different back then….”

I walked along the beach where Stanley must have come ashore. I tried to imagine what it was like. The German’s reinforced concrete bunkers are still there. They still look massive, impregnable and unassailable.

How could anyone have gotten to safety across the open beach and up the sandy bluff? And yet, they did. By the end of the day on June 6, there were 150,000 troops on the continent. As Hitler remarked, “The God of War has gone over to the other side.”

The God of War had indeed changed allegiance. Rommel, in charge of the German defense west of the Seine, committed suicide. His successor, Kluge, followed in his footsteps – shooting himself a few months later.

Less obedient to the God of War was von Choltitz, in charge of the German garrison in Paris. Hitler ordered him to destroy the city. But von Choltitz may have been in Paris too long. He disobeyed orders. He surrendered Paris, intact.

The American cemetery at Omaha Beach is the setting of the first and last scenes of Saving Private Ryan. As in the film, there were a number of WWII vets wandering among the crosses and stars of David. Like the father in the Rockwell painting, they wore baseball caps – often with indicators of their military affiliations – and bore the creases of age and hardship. Accompanied by younger relatives, they walked slowly, reverentially.

Most were very friendly and open – relaxed, as Americans tend to be. One older guy seemed to be stunned, though. It was as though he was trying so hard to recall something, that he had forgotten where he was and what he was doing.

I wondered what they were thinking…and what memories they brought with them. And how things could have changed so much…so that even though these events happened during their lifetimes – it is as if they happened a thousand years ago.

I thought, too, about how all the great changes and challenges of our century were over before I was born. The baby boomers have faced nothing like the Depression, or Electrification, or Automobilization, or National Socialism, or WWII. We have had an easy time of it. Let’s hope it stays that way.

Ed. Note: Plenty has changed since this essay originally appeared at the turn of the 21st century. And while  it remains to be seen if the “great changes and challenges” of the last century have any equal in this one, there will no doubt be plenty to reckon with along the way. Sign up for the FREE Daily Reckoning email edition, right here, and discover actionable ways for you to live freer, happier and wealthier than you ever thought possible.