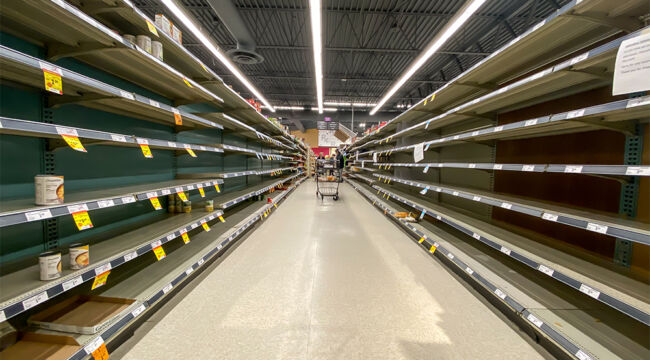 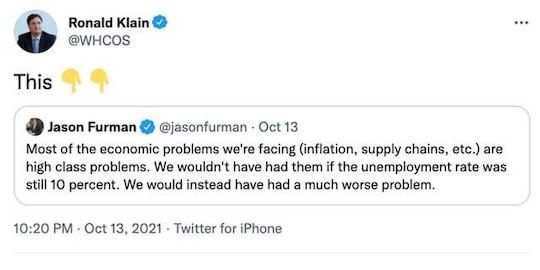 Incidentally… this is the identical Ronald Klain who objected to Trump tax cuts this way:

Will [they] hold up a Campbell Soup can and argue that price increases for basic food items don’t really hurt the middle class? Because I think that is the Trump admin economic message of the day.

Inflation ran to 2.4% at the time. Today the official tabulation pegs it at 5.4%. It is likely higher.

But the fellow endorses the claim that the business represents a “high class problem.”

He believes you roll in green, green clover.

Do you glow about your heightened class as you endure your fleecing at the filling station?

When your grocery shopping cleans you out?

When you cannot locate the item you seek because shelves run bare?

Perhaps you plan to purchase a Christmas toy for a child or grandchild. Owing to your overflowing bounty… you can expect to pay 400% higher for this toy this season.

Meantime, some 70% of early shoppers claim an item they seek is no longer in stock.

The present supply chain discombobulations are the direst since World War II claims one expert — when “there were submarines sinking commercial traders.”

Our spies inform us worldwide freighter torpedoings number zero. Yet the lacks endure. They may worsen yet.

Fortunately… and by God’s grace… only 4.8% of Americans wallow in unemployment.

No, says Mr. John Williams and his ShadowStats. As he reminds us:

The long-term idle, dispirited beyond all hope, were read out of official existence in 1994.

They are not actively chasing work.

If government statistics-manglers included these defeated and forlorn forgottens… what is the authentic unemployment rate?

If this figure reflects a true reading — we are uncertain if it does — you are free to moan and bellyache about your “high class problem.”

Recall, 10% unemployment is the line, the high fence dividing the classes.

But have you a right to moan and bellyache about present economic conditions?

Washington Post columnist Micheline Maynard says no. The lady claims Americans are “spoiled”… that they must transition to “new, more realistic expectations.”

What precisely these new, more realistic expectations constitute… we do not know.

To verge upon starvation for want of food…

To be hollowed out by inflation…

What else should Americans expect — realistically?

Will they be forced to endure a deprived and depraved “new normal”?

If so, it is not a normal to which they have consented. They have not signed their names upon Ms. Maynard’s dotted line.

Who — and what — brunts the blame for the present laments? Libertarian writer Jeffrey Tucker:

“Every bit of this unfolding disaster traces to lockdowns and money printing. Every bit of it.”

Mr. Tucker recounts a recent conversation with one business owner. This fellow claims he cannot obtain the labor he requires. Why? In his telling:

Lockdowns showed millions of people that they can get by without working. The government dumps money into their bank accounts. They can rent three bedroom apartments, stick 6 people in there, share the rent, and get by very cheaply and even become richer than they’ve ever been, even without a job. They stay drunk and stoned all day while watching big screen TVs.

“The modern world is insane,” said G.K. Chesterton once upon a time, “not so much because it admits the abnormal as because it cannot recover the normal.”

Can this modern world… insaner even than Chesterton’s… recover the normal?

Can it afford not to?