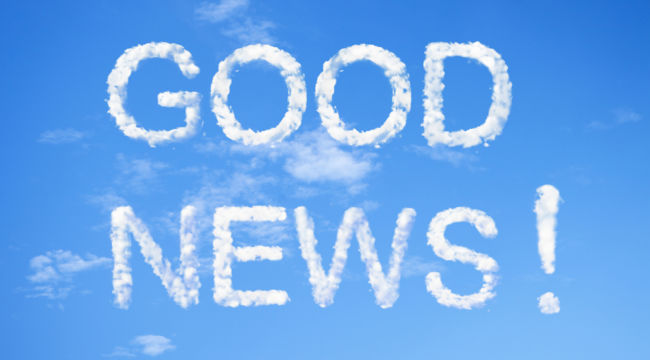 What are we to make of all the good news? Good news?

We learn by the United States Department of Labor that Americans were 1.8% more productive in 2019 than in 2018.

Here we have the greatest annual productivity gain since 2009.

We learn further that Americans’ real hourly wages (inflation-adjusted, that is) expanded 1.9% last year — the highest rate since 2015.

That is a record figure… nosing out the previous 58% from January 1999.

And a record 74% of American adults expect next year will find them in easier waters yet.

Thus the American outlook is bright… and the spirit of gain is on the stretch.

Now what is this? Yet another sunshaft cracks through the overcast…

China has announced — unexpectedly — that it will slash tariffs on $75 billion of United States exports. Some, reportedly, as much as 50%.

And whispers swirl that researchers are nearing an antidote to the coronavirus.

China announced it will begin an experimental trial of the drug remdesivir. The New England Journal of Medicine reports the drug may offer at least limited salvation.

It seems the world is nearing a cure for the coronavirus and that could mean markets may only need to price in only one bad quarter of data for China.

… the playbook remains once Wall Street is beyond the virus [and] risky assets will remain supported on central bank stimulus and the global growth rebound story.

The Bulls Are Back in Charge

The Dow Jones ran up nearly 500 points by the closing whistle. The S&P went on a similar spree.

Both indexes extended their gains today.

The bullish narrative that’s been driving stocks since late 2019 is firmly back in control of the tape after taking a brief pause during the final days of January.

But let us draw a thick gray cloud across the sky… and patch the widening gap in the overcast.

We begin with United States productivity…

Productivity may have expanded 1.8% last year. Yet one swallow does not a summer make… as the phrase runs.

Productivity still goes far beneath the 2.1% average prevailing since the Second World War.

We demand to see far more. But we may not see more…

Explain the gentlemen and ladies of Oxford Economics:

Productivity growth reached its fastest pace since 2010 last year, but we do not believe such performance will be sustained given lower domestic and global growth prospects.

But what about China’s newfound receptiveness to American wares? Should that not fill the sails of growth… and elevate the global outlook?

The Coronavirus Could Cut 2% From Global GDP

Look to the coronavirus. Henrich says the decision is a mere expression of Chinese desperation:

How long before people realize that China proactively capitulating on tariffs is a sign of how serious the economic impact of this [corona]virus situation actually is?

There may be sound justice here.

Zero Hedge, in summary of Goldman:

According to Goldman’s chief economist Jan Hatzius, the assumed hit to Chinese growth will directly subtract about 1% from global GDP growth in Q1. In addition, spillover effects to the rest of the world will take just under 1% off global growth, for a total hit of nearly 2% in the first quarter. The spillover effects consist of reduced exports to China (worth about 0.3%) and reduced spending by Chinese tourists abroad (worth about 0.6%).

But since we are the very soul of fairness, we must report that Goldman’s crackerjacks expect a full recovery.

But what if they are wrong? What if this coronavirus is not so easily caged, conquered or killed?

Put aside all rumors, he appears to say. No effective vaccinations or treatments yet exist.

“We don’t properly understand its transmissibility or severity… We need to bring this virus out into the light so we can attack it properly.”

Our agents — for example — report hospitals in Wuhan are packed to suffocation, bursting with victims.

There are likely to be many times more cases in Wuhan than officially confirmed. Clearly, the hospitals are overwhelmed.

We further understand the body-burners are busy — our men report pillars of smoke billowing constantly from the local crematoria.

But we must concede, our information comes secondhand. We are unable to confirm it.

We can confirm, however, the galloping confidence of Americans referenced above…

Let us briefly revisit the details:

Gallup informs us 59% of Americans feel more financially flush this year than last.

That is a record figure… nosing out the previous 58% from January 1999.

And a record 74% of American adults expect next year will find them in easier waters yet.

Have you noticed the dates when Americans were last so exuberant?

That too is correct. And the Nasdaq absorbed an 80% trouncing as they unfolded.

We suspect markets are in for similar roughhouse in the not-distant future. Next year? Perhaps in 2022?

We have no answer of course.

That is, stocks are more expensive than ever by certain measures.

Nature abhors a vacuum, it is said. But nature also abhors extremes.

We suspect nature will iron out today’s extremes… and with great gusto.

Again, we cannot say when.