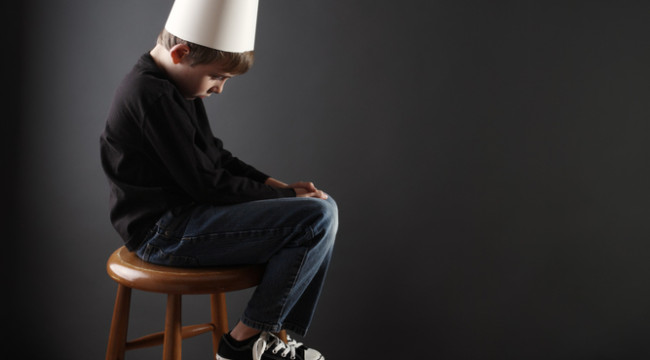 A Despicable Way to Use Education

On Thursday, July 25, dozens of bankers, hedge fund types and private equity investors gathered in New York to hear about the latest and greatest opportunities to collect a cut of your property taxes.

Of course, the promotional material for the Capital Roundtable’s conference on “private equity investing in for-profit education companies” didn’t put it in such crass terms. But that’s what’s going on.

Welcome to another instance of “extraction” — a term we first ran across two years ago. “Tens of trillions of dollars are being extracted from the United States of America!” exclaimed then-MSNBC host Dylan Ratigan during an epic rant, duly noted in The 5 Min. Forecast. “An entire integrated system — financial system, trading system, taxing system — that was created by both parties over a period of two decades is at work on our entire country right now.”

“Washington’s empire,” added Reagan-era Treasury official Paul Craig Roberts last year, “extracts resources from the American people for the benefit of the few powerful interest groups that rule America… The U.S. Constitution has been extracted in the interests of the Security State, and Americans’ incomes have been redirected to the pockets of the 1%.”

Along the way, we’ve chronicled efforts at extraction by such elites — like the “REO-to-rental” program in which hedge funds and private equity snap up foreclosure properties from Uncle Sam at fire-sale prices. You, dear reader, are excluded — seeing as you can’t drop $1 billion on a bulk purchase of single-family homes.

So it goes with “charter schools.”

“Set up as alternatives to traditional public schools,” explains Reuters, “charter schools typically operate under private management and often boast small class sizes, innovative teaching styles or a particular academic focus. They’re booming: There are now more than 6,000 in the United States, up from 2,500 a decade ago, educating a record 2.3 million children.”

Charters have a limited admissions policy, and the applications can be as complex as those at private schools. But the parents don’t pay tuition; support comes directly from the school district in which the charter is located.

And they’re lucrative, attracting players like the specialty real estate investment trust EPR Properties (EPR). Charter schools are in the firm’s $3 billion portfolio along with retail space and movie megaplexes.

“It’s our highest-growth and most appealing sector right now of the portfolio,” CEO David Brain told CNBC last year. “I think it’s a very stable business, very recession-resistant. It’s a very high-demand product. There are 400,000 kids on waiting lists for charter schools… The industry’s growing about 12-14% a year.”

The Arizona Republic found that charters “bought a variety of goods and services from the companies of board members or administrators, including textbooks, air conditioning repairs and transportation services.” Most charters were exempt from a requirement to seek competitive bids on contracts over $5,000

In Florida, the for-profit school industry flooded legislative candidates with $1.8 million in donations last year. “Most of the money,” reports The Miami Herald, “went to Republicans, whose support of charter schools, vouchers, online education and private colleges has put public education dollars in private-sector pockets.”

Among the big donors: the private equity firm Apollo Group, the outfit behind the for-profit University of Phoenix, which has experimented with online high schools. Apollo dropped $95,000 on Florida candidates and committees.

Lest you get the idea charter schools are a “Republican” thing, they’re also favored by big-city Democrats. This summer, 23 public schools closed for good in Philadelphia — about 10% of the total — to be replaced by charters. Charters have a history in Washington, D.C., going back to 1996.

And they were favored by Arne Duncan when he ran Chicago Public Schools. Today, he’s the U.S. secretary of education. In 2009, Duncan rolled out the Obama administration’s “Race to the Top” initiative, doling out $4.4 billion in federal money to the states — but only to those states that lifted their caps on the number of charter schools.

Too bad the kids in charter schools don’t learn any better than those in plain-vanilla public schools. Stanford University crunched test data from 26 states. About a quarter of charters delivered better reading scores, but more than half produced no improvement, and 19% had worse results. In math, 29% of the charters delivered better math scores, while 40% showed no difference, and 31% fared worse.

Unimpressive, especially when you consider charter schools can pick and choose their students — weeding out autistic kids, for example, or those whose first language isn’t English. Charter schools in the District of Columbia are expelling students for discipline problems at 28 times the rate of the district’s traditional public schools — where those “problem kids” are destined to return.

Nor does the evidence show that charters spend taxpayers’ money more efficiently. Researchers from Michigan State and the University of Utah studied charters in Michigan, finding they spent $774 more per student on administration, and $1,140 less on instruction.

About the only thing charters do well is limit the influence of teachers’ unions. And fatten their investors’ portfolios.

In part, it’s the tax code that makes charter schools so lucrative: Under the federal “New Markets Tax Credit” program that became law toward the end of the Clinton presidency, firms that invest in charters and other projects located in “underserved” areas can collect a generous tax credit — up to 39% — to offset their costs.

So attractive is the math, according to a 2010 article by Juan Gonzalez in the New York Daily News, “that a lender who uses it can almost double his money in seven years.”

It’s not only wealthy Americans making a killing on charter schools. So are foreigners, under a program critics call “green card via red carpet.”

“Wealthy individuals from as far away as China, Nigeria, Russia and Australia are spending tens of millions of dollars to build classrooms, libraries, basketball courts and science labs for American charter schools,” says a 2012 Reuters report.

The formal name of the program is EB-5, and it’s not only for charter schools. Foreigners who pony up $1 million in a wide variety of development projects — or as little as $500,000 in “targeted employment areas” — are entitled to buy immigration visas for themselves and family members.

“In the past two decades,” Reuters reports, “much of the investment has gone into commercial real estate projects, like luxury hotels, ski resorts and even gas stations. Lately, however, enterprising brokers have seen a golden opportunity to match cash-starved charter schools with cash-flush foreigners in investment deals that benefit both.”

So how can you, as a retail investor, grab a piece of this? How can you reclaim some of your property tax dollars from the fat cats?

As with many other instances of “extraction”… good luck.

Sure, you could buy shares of the aforementioned EPR Properties. Unfortunately, you’re buying strip malls and ski parks along with charter schools. It’s not a “pure play.”

The history of publicly traded charter school firms is limited and ugly. Edison Schools traded publicly from 1999-2003. During that period, it reported one profitable quarter. Shares reached nearly $40 in early 2001… only to crash to 14 cents.

“There’s a risk to taking education to Wall Street,” says Education Week — “one that helps explain why so few publicly traded companies cater to the educational needs of students in elementary, middle and high school.”

That risk is spotlighted by the only pure play currently trading on a U.S. exchange. In December 2007, just as the “Great Recession” got underway, K12 Inc. went public under the ticker symbol LRN.

It has proven, at best, a trading vehicle. 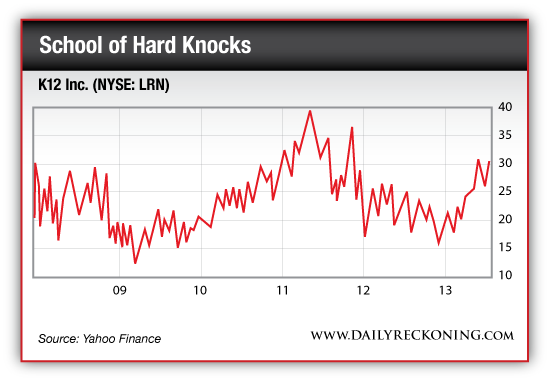 Share prices hit nearly a four-year low in December 2012 when The New York Times published an expose on a K12 online charter school venture. Nearly 60% of its students are below grade level in math, and 50% in reading. One-third don’t graduate on schedule.

The story also revealed CEO Ronald Packard collected a salary in 2011 — $5 million — nearly double that of the previous year. And that his bonus is linked not to student performance, but to enrollment.

It’s a lot easier to escape this sort of scrutiny if your charter school venture is privately held — or, in the case of EPR, mixed in with other ventures that have nothing to do with education.

“We spend a great deal of time, money and resources looking for new investment ideas that you, dear reader, can act on independently,” we wrote in our Apogee Advisory, early in 2012… “Sometimes what we find instead is outrage.”

For now, the big money in charter schools is confined to those on the inside. Even the vampire squid is in on it. In late 2010, Goldman Sachs announced it would lend $25 million to develop 16 charter schools in New York and New Jersey. The news release said the loans would be “credit-enhanced by funds awarded by the U.S. Department of Education.”

P.S. In today’s issue of The Daily Reckoning, we explored more of the stupid and unjust regulations that are robbing you blind… And we gave readers a few actionable ideas on how to combat them, in the process. If you’re not receiving The Daily Reckoning, you’re only getting half the story. Sign up for free, right now and start getting the whole thing, every day, sent straight to your inbox.