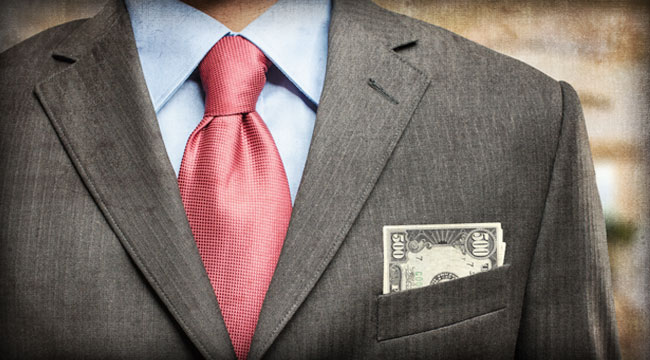 A Crime That Pays Huge Dividends With No Consequences

“Every day on Wall Street, money is stolen, embezzled, burgled, and robbed. But the mechanisms of those thefts are often so arcane and idiosyncratic that they don’t fit neatly into the criminal code, which is written for the dumb crimes committed by common stick-up artists and pickpockets.” — Matt Taibbi, The Divide: American Injustice in the Age of the Wealth Gap

Ever wonder why nobody (except Kareem Serageldin) went to jail for all the crimes committed during the financial bubble that popped in 2008?

If you think back to the 2000-era bubble, lots of people went to jail for the fraud perpetuated at Enron, Tyco, Adelphia, and other firms. Plus, the law back then destroyed a whole accounting firm — Arthur Andersen, you may remember — and 28,000 jobs along with it, in the wake of the bust.

Yet post-2000, firms with far more brazen crimes got off by paying a mere fine.

Its U.S. subsidiary committed, as Taibbi writes, “an astonishing list of crimes — a laundry list that included pretty much every kind of crime a bank can possibly be charged with.”

And what was the penalty for all this?

At the time, it was the biggest fine in history. But in context, for a firm that made $22 billion per year, it was not much at all. In fact, looked at in a cold calculating light, the message clearly is: Crime pays.

Note there was no jail time for anybody. Everybody at HSBC got paid. Well, HSBC agreed to partially — partially, mind you — defer (!) bonus payments to its top executives.

“If you are rich and powerful, you can get away with almost anything.”

Oh, and HSBC had to say it was sorry. “We are profoundly sorry,” said CEO Stuart Gulliver.

But how did we get here?

Matt Taibbi explores the reasons in his book The Divide. Taibbi used to write for Rolling Stone. He was the guy who famously called Goldman Sachs a “great vampire squid wrapped around the face of humanity, relentlessly jamming its blood funnel into anything that smells like money.” (I wish I had written that line.)

He’s a very good investigative reporter and a fine writer. He’s mellowed out a bit in this book and you won’t find much of the usual Taibbi name-calling and profanity. Taibbi, for good or ill, plays this one straight.

He covers a lot of ground, but the central thesis is one most people will intuitively grasp: If you are rich and powerful, you can get away with almost anything. Rights exist on a sliding scale. And if you are on the bottom, you can do time for loitering.

“The cleaving of the country into two completely different states — one a small archipelago of hyper acquisitive untouchables, the other a vast ghetto of expendables with only theoretical rights — has been in the works a long time.”

But to answer the question posed up top about why nobody’s going to jail, there’s more to the story. You have to go back to a memo written by Eric Holder, the current attorney general, back in 1999, when he was an official in the Clinton White House.

It meant, in essence, that the government could take into account all kinds of factors like job losses and such in deciding whether to press criminal charges against a big company. “If the math isn’t there,” Taibbi writes summing things up, “hold the charges. Seek other forms of justice instead. Fines. Civil sanctions. Cease and desist orders. Deferred prosecutions. There are other ways, Holder wrote, to get the job done.”

In other words, there would never be another Arthur Andersen. Firms had new ways to wiggle out of criminal charges. Hence, we have the monster we have today. Companies too big to jail.

Meanwhile, in other aspects of life, a culture approximating a police state grows apace. Taibbi points to the record levels of incarcerations in the U.S. “Our prison population, in fact, is now the biggest in the history of human civilization,” Taibbi writes. The U.S. has more people behind bars today “than there were at any time in Stalin’s gulags.”

The story here is nasty. He tells the story of private prisons, such as those of Corrections Corp. of America. They get, “depending on whom you believe,” upward of $166 per day from the federal government per inmate. This is four times what it cost back when the government took care of its own detainees.

“The big influx of cash impressed investors on Wall Street,” Taibbi writes. From 2000-2011, CCA’s stock went up 34-fold. Sales went from $300 million to $1.7 billion by 2011. “Overall, the corrections industry is one of the soundest stock/equity bets in the world, with soaring revenues — the industry as a whole pulled in more than $5 billion in America in 2011.”

Needless to say, that didn’t just happen. CCA and others donate generously to politicians. They support anything that might lead to more people spending time in their cells. They particularly like anti-immigrant bills. And Taibbi has harrowing tales about the mistreatment of immigrants in this country. He calls Hispanic immigrants “one of America’s last great cash crops.”

“And someone else wins, too,” Taibbi writes. “Wall Street. Some of the biggest investors in private prison companies are, you guessed it, the too-big-to-fail banks.”

Taibbi writes about an analysis from Zacks that gleefully revels in the lack of economic sensitivity in the business. And then cites a chart with shows a hockey stick increase in the number of incarcerated Americans.

So the country is turning more and more into a dragnet… but only for the poorest. There is no HSBC banker sitting in a CCA cell. It is symbolic of the kind of economy we have today:

“Like too-big-to-fail banking itself, private prisons are an industry that depends not on the unpredictable economy but upon political connections. It’s the perfect kind of business in the oligarchical capitalism age, with guaranteed profits to provide a low-cost public insurance against the vagaries of the market.”

The economy is riddled with corruption like this, a marriage between big business and Big Government. And a recurring theme in this book is the offspring this marriage creates: a relentless, insatiable bureaucratic force that grinds up individuals fed into its maw.

“These bureaucracies accomplish just two things,” Taibbi writes. “They make small piles of money smaller and big piles of money bigger… It just relentlessly creates and punishes losers, who get to sit beneath an ever-narrowing group of winners, who may or may not stay on top for long.”

Legal rights are not absolute. Those with money who can tirelessly throw lawyers and lawsuits and counterlawsuits at any problem can survive almost anything. For the rest, it’s a matter of attrition. And those at the bottom have no chance.

I can’t do justice to all the journalistic fieldwork and stories Taibbi has put in his 416-page book. It is a gripping read and will infuriate you and frighten you, and maybe even make you sad for what’s happened to the “Land of the Free.”

The book does not have a happy ending. The good guys don’t win in the end. But I encourage you give it a read. What it describes is life in these United States. Those of us who cherish liberty have quite a job ahead of us.

Ed. Note: If you had received today’s email edition of Laissez Faire Today, you would have learned of a unique investment opportunity that can only be accessed via a nine digit code… and how you could gain exclusive access to this code for yourself.  Just one small benefit of being a FREE subscriber to the Laissez Faire Today email edition. To make sure you never again miss out on opportunities like this, click here and subscribe for FREE, right now.

A new age in blockchain tech is upon us. Some of the biggest names across multiple industries are now adopting this tech. But what does this mean for you? At the early onset, it means tons of new wealth-earning opportunities. Read on to see how…