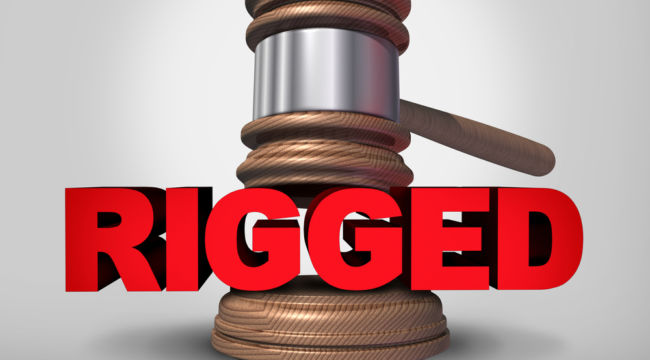 A “Corrupt and Incestuous” System

I’ve been in Vancouver, Canada, this week for the famous Sprott Natural Resource Symposium. I was honored to be a keynote speaker, and I discussed how central banks rig markets.

The timing couldn’t be better, seeing how the Fed lowered interest rates this Wednesday. It just means more “dark money” that will pour into assets like stocks, bonds and real estate and inflate the “everything bubble” even more.

I doubt very much that lowering interest rates by 25 basis points is going to have an effect on the real economy. Ten years into the current recovery, central bank dark money has done little to expand the Main Street economy.

The numbers reveal that 2018’s economic numbers didn’t hit the 3% target set by the White House.

Despite the Trump administration’s $1.5 trillion in corporate tax cuts, annual revisions to GDP data revealed that the U.S. economy grew just 2.5% during 2018. This was lower than the previously reported figure of 3.0%.

In addition, while consumer expenditures rose by 4.3%, overall business investment dropped by 5.5%.

That implies that the corporate tax cuts, touted by the administration, couldn’t compete with the economic weakness and ongoing uncertainty caused by trade wars.

Put it all together and it shows U.S. economic growth is slowing down. This could give the Fed more ammunition with which to cut rates by 25 basis points when it meets again in September.

It will probably lift the stock market in the short term. Longer term, it could spell a trend toward more debt and economic weakness. But it’s all about propping up the stock market!

But the flood of dark money is about to get even deeper.

The ECB Will Soon Join the Party

The European Central Bank (ECB) has given markets strong indication that it will cut interest rates at its next meeting in September.

It said it expected rates to remain at current levels “or lower” through mid-2020. Central bankers choose their words carefully. That’s a strong hint that you can expect “lower.”

The ECB also noted that it could use other dark money measures if necessary, such as a reinstatement of quantitative easing.

ECB President Mario Draghi noted the European economy “ is getting worse and worse.”

His concerns were about the weak manufacturing sector, Brexit and trade tensions.

Meanwhile, inflation in the eurozone sits below the ECB’s 2% target. That gives ample room for a rate cut.

So far, low to negative interest rates have not increased inflation, nor has the size of the ECB’s multitrillion-euro asset book, courtesy of its quantitative easing program.

The Fed has already cut rates. That gives the ECB even more of a reason to coordinate cuts of its own.

More dark money is coming. And it’s here to stay.

Again, it could lift markets in the near term. But it only provides the illusion of economic health.

A “Corrupt and Incestuous System”

Meanwhile, the tough reforms needed for real long-term economic growth are getting kicked down the road once again.

The bottom line is the system is rigged in favor of Wall Street and the big banks that have been deemed too big to fail. It’s a corrupt and incestuous system filled with perverse incentives and conflicts of interest. Here’s an example…

Eighty-two percent of bank analysts on Wall Street give Citigroup stock a “buy” rating. What you don’t hear reported on CNBC or Fox Business News is that the major banks they work for — like Goldman Sachs, Morgan Stanley, JPMorgan, Deutsche Bank, UBS and Bank of America — have strong incentive to recommend Citigroup.

That’s because all the major banks are interconnected through derivatives. And weakness in one bank could spill over into the others. But as one observer asks, “Why should any Wall Street bank be allowed to make research recommendations on stocks and then trade in those very same stocks?”

It’s a corrupt system geared by insiders for insiders. I should know because I used to be one of them.

A Record of Market Manipulation

It’s been over a decade since the world’s major central banks reacted to the financial crisis by cheapening the value of money through record-low, zero or negative rates.

My research for my book Collusion: How Central Bankers Rigged the World revealed how central bankers and massive financial institutions have worked together to manipulate global markets for the past decade.

Major central banks gave themselves a blank check with which to resurrect problematic banks; purchase government, mortgage and corporate bonds; and in some cases — as in Japan and Switzerland — buy stocks, too.

They have not had to explain to the public where those funds are going or why. Instead, their policies have inflated asset bubbles while coddling private banks and corporations under the guise of helping the real economy.

The zero interest rate and bond-buying central bank policies that prevailed in the U.S., Europe and Japan were part of a coordinated effort that has plastered over potential financial instability in the largest countries and in private banks.

So today we stand near — how near we don’t yet know — the edge of a dangerous financial precipice. The risks posed by the largest institutions still exist, only now they’re even bigger than they were in 2007–08 and operating in an arena of even more debt.

Not long ago the Bank for International Settlements (BIS), or the “central bank of central banks,” sounded a new alarm.

It warned that low rates have catalyzed an increase in the number of “zombie” firms. The number of such firms has now risen to an all-time high.

Zombie firms are companies “that are at least 10 years old, yet are unable to cover their debt service costs from profits,” according to the Reuters newswire. Their prospects for future growth aren’t so hot either.

According to the BIS, these zombies are still piling on debt and sucking money out of the real economy. Zombies “took on more debt and disposed of fewer assets after 2000.” This behavior accelerated after the financial crisis because of low interest rates.

The problem is that once a company becomes a “zombie” it tends to stay a zombie. That phenomenon is only getting worse. The BIS disclosed that in the late 1980s zombie firms had a 60% chance of remaining zombies into the following year. But that probability reached 85% as recently as 2016.

Zombies created from an influx of central bank money aren’t good long-term investments. It’s one thing for a company to take on debt to grow, but it is another to take on debt simply to repay other debt.

When the debt bomb finally detonates, it’s the rest of us who will suffer. Because of the collusion that’s gone on and continues to go on among the world’s main central banks, that problem is now an international one.

You can avoid the worst of the fallout by staying away from such firms and targeting ones with healthier balances of debt and debt-payment abilities.