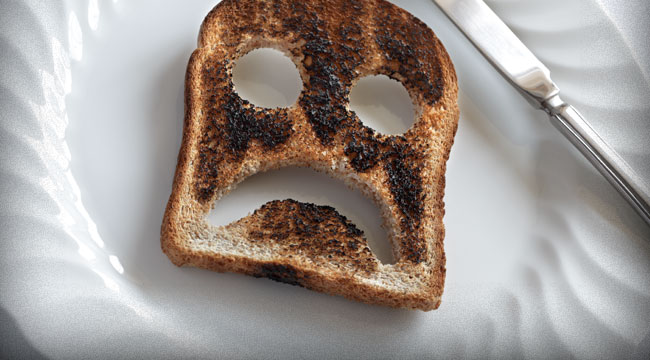 A Case of the Mondays

By all rights, the market should be having — as the annoying receptionist in Office Space said — “a case of the Mondays.” We count at least six items that should be dragging the market down.

For starters, Caterpillar delivered a whopper of an earnings miss. Or to be more accurate, CAT failed to guide analysts sufficiently low a few weeks ago to deliver an earnings beat today. (Props to our Dan Amoss for spotting CAT’s sickly state on behalf of PRO-level readers weeks ago.)

Bad news for the giant U.S. health care sector, the top-performing S&P sector this year: Philips beat expectations, but van Houten tells CNBC that sales of its health care products will take a hit… and growing sales of its pricey LED light bulbs won’t be enough to overcome that hit.

Nor is there cheer from the housing sector this morning: The National Association of Realtors says sales of existing homes dropped 0.6% between February and March.

Naturally, the “expert consensus” was looking for a small increase.

Out of nowhere, the Senate could vote as early as today to enact an Internet sales tax.

As we’ve chronicled before, lawmakers have tried and failed to take this step since 1999. This time, it’s a rush job: Posted on the Library of Congress website only over the weekend, Senate Majority Leader Harry Reid used a parliamentary maneuver to bring it up for a vote without going through committee.

“For the first time,” says a Wall Street Journal editorial, “online merchants would be forced to collect sales taxes for all of America’s estimated 9,600 state and local taxing authorities.”

“Data Shift to Give 3% Lift to U.S. Economy,” says a front-page story in this morning’s Financial Times: “Intangible Assets Add Billions to GDP.”

“The government is changing the way it does its accounting,” muses Chris Mayer, who still reads his newspapers on paper, the old-fashioned way. “As a result, the U.S. economy will be 3% bigger. Whoopee. Tell that to the unemployed. Tell that to folks who haven’t seen their real wages go up in a decade. Next time you get your paycheck, see if it’s 3% bigger.

“More evidence that modern-day macroeconomics is a farce and a joke at best. At worst, the whole discipline is a sinister apology for the growth of government and a nefarious way for Ph.D.s to get paid in a world where their skill set is worth a plate of warm beans.”

Speaking of which — and in what might be the most unnerving development of all — Ben Bernanke is blowing off Jackson Hole.

The Kansas City Fed’s every-August confab in Wyoming has become the premier event for global central bankers and a touchstone for the market’s navel-gazers — especially the Fed chairman’s address. It was at Jackson Hole in 2010 that Bernanke telegraphed “QE2” loud and clear — setting off a new leg of the stock market’s bull run.

This year? He has what Reuters describes vaguely as a “personal scheduling conflict.” It’s the first time in 25 years a Fed chairman has skipped the event.

Hmmm… Maybe he knows something? He has a scheduling conflict because he’s headed to the proverbial “secure undisclosed location”? Heh…

In the face of all these ill omens, the market is… holding its own. The major indexes are in the red, but not much. The S&P rests comfortably above support at 1,550. The Nasdaq has barely budged.

“Stocks are holding their ground early in this morning’s session — predictably,” says a confident Jonas Elmerraji. “The broad market has followed a script all the way back to November, so it’s not hugely surprising that the S&P 500 is continuing to follow that script today. Context matters a lot right now. Even though last week was the single biggest loser for the S&P, it didn’t even erase the gains that the S&P made during the previous week.

“That predictable trading,” Jonas adds, “is setting up some attractive buying opportunities for stocks in the weeks ahead.” We think the sound we heard down the hall was Jonas smacking his lips.