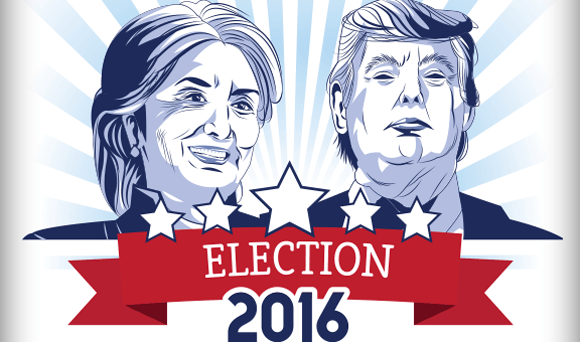 Whoever Wins Tomorrow, the Casino’s Going Down

We just had another “Jobs Friday” report and the underlying message could not have been more hostile to the “all is awesome” meme of the Wall Street/Washington establishment.

Nor could it have been more timely and apt on the eve of an election where Donald Trump’s insurgent candidacy has a fighting chance of crossing the finishing line, despite yesterday’s about-face by FBI director James Comey.

The U.S. lost another 9,000 manufacturing jobs in October. That brings the year-to-date loss to 58,000jobs in this breadwinner section of the labor market and compares to a 10-month gain of 275,000 low-pay, part-time jobs in the bartender and waiter category.

Needless to say, this divergence has been underway for a long time. Since the pre-crisis peak in December 2007, in fact, the U.S. has lost 1.5 million manufacturing jobs, while gaining1.7 millionbartenders and waiters at a fraction of the pay.

No wonder Donald Trump made campaign stops in Wisconsin and Michigan over the weekend!

But forget the jobs picture. Look at the markets. They’ve gone precisely nowhere for two years…

And that was before anyone thought Trump was actually running or crowds were chanting “lock her up” about Hillary. It was also before the Fed had demonstrated it was fully as craven and confused as is now evident.

But never mind. Reported earnings have dropped for seven straight quarters since then to $90 per share, thereby goosing the PE multiple to the nosebleed section of history at 23.2X.

You would think that the prospect of a government paralyzed by impeachment (if Hillary wins) or coming totally unglued (if Trump wins) might have taken its toll. Indeed, the near certainty of  unprecedented gridlock and rancor in the next Congress is especially threatening because the current debt ceiling expires in March.

The first task of the next Congress, therefore, will be to boost the nation’s public debt limit above the symbolic $20 trillion marker. Yet that won’t happen without repeated episodes of political brinksmanship and one or more extended government shutdowns. An already fragile bond market, where since July prices have dropped by upwards of 30% on the long end, will be hammered with disruption and uncertainty.

Likewise, even if Hillary does stumble into the Oval Office with a slight edge in the electoral college, there is virtually no chance her “coattails” will carry the House, or that she has any coattails at all.

Yet that prospect is more significant than a barrel full of monthly jobs reports because it means the GOP will retain control of all the House committees and the subpoena power which goes with it.

Accordingly, there will be a swarm of investigations about every aspect of the Corrupt Clinton Clan — including Servergate, pay-to-play at the Clinton Foundation and the prodigious heap of dirty laundry and de facto confessions of wrong-doing and political corruption that is embedded in the trove of Wikileaks.

If given half the excuse, the House of Representatives will be in the process of launching impeachment hearings even before a putative Clinton Administration has filled even half of its approximate 3,000 appointments to the sub-Cabinet and agencies.

On the other hand, a Trump victory would engender open warfare with the Wall Street/Washington ruling elites and their servile megaphones in the mainstream media.

Indeed, as was have repeatedly observed, Donald Trump was meant to fatally disrupt and destabilize the machinery of the status quo. Bring the house down, as it were.

But he has no coherent program to address America’s failing economy or to hog-tie the nation’s rogue central bank and the self-perpetuating monetary politburo that has transformed the vital money and capital markets of American capitalism into dangerously unstable gambling casinos.

In short, the third great Financial Bubble of the century will blow-up the minute a Donald Trump presidency is certified by the electoral college, if not before. Another stock market crash, however, will be far more devastating that the Lehman meltdown of September 2008 because this time there will be no panicked Washington fireman at the ready.

Instead, there will be a Washington brawl and a fractured Fed with no dry powder remaining after dithering for 95 months on the zero bound. There is not a remote chance it can get approval from Congress to buy stocks and corporate bonds, which are now outside it statutory charter, and any attempt to press forward with sub-zero rates will ignite a political firestorm in Trumpland America.

So as I said on the CNBC Fast Money show last night, the coming political and fiscal conflagration is not remotely “priced-in”.

My appearance was billed under the heading of “sell everything.”

But that’s not bombast or hype. The fact is, at 1 PM last Friday everything changed when FBI Director Comey’s letter landed on Capitol Hill. We are now in Watergate 2.0 with a Teapot Dome equivalent thrown in as a bonus.

Comey’s sudden reversal yesterday probably raises a lot more questions than it solves. The horse is already out of the barn, and it’s unclear if yesterday’s announcement has any influence on voters already convinced of Hillary’s underhandedness.

Unless some new bimbo eruption occurs around Trump today or tomorrow, this race appears to be going down to the wire in the electoral college. As I indicated the other day, Trump seems to have consolidated the Romney Red base of 206 electoral votes including Utah, where the neocon spoiler (Evan McMullin) appears to be fading rapidly.

He also has a decent chance of winning three battleground prizes in Florida, Ohio and Iowa. That’s another 53 electoral votes and would take him to 259. From there it is anyone’s guess about the outcome, but there is now a growing certainty about something even more important.

There is every prospect that if Trump does not win he will loudly, aggressively and bitterly contest the result. That would bring demands for recounts and charges of voter fraud which the mainstream media would interpret as racially charged. It will be about Philadelphia and maybe even Detroit.

Stated differently, we have a condition of massive risk and no reward in the stock market, and a perfect storm of political breakdown and economic recession steaming right at it. Under normal conditions, the casino would be emptying out save for the night watchman.

But after 20 years of Bubble Finance the punters and robo-machines are incapable of heeding the warnings.

P.S. This is my last chance to get my message out before tomorrow’s election.

I believe that all hell is going to break loose in the financial markets very soon, whoever wins. Donald Trump was right when he said that “we’re in a big, fat, ugly bubble.” A Trump win tomorrow would throw markets into chaos, especially after today’s massive rally.

Regardless, as soon as the Federal Reserve lifts their foot off of the neck of interest rates in this country, we’re going to have another big crash.

That’s why you need a survival guide to get through the turmoil that lies ahead. My latest book, TRUMPED! A Nation on the Brink of Ruin… And How to Bring It Back, provides that plan. I wrote it for that purpose.

If you still haven’t ordered your FREE copy, I strongly urge you to order it today. Time’s running out, and the window of action is closing fast. Go here now to claim your free financial survival guide to see you through the coming storm.