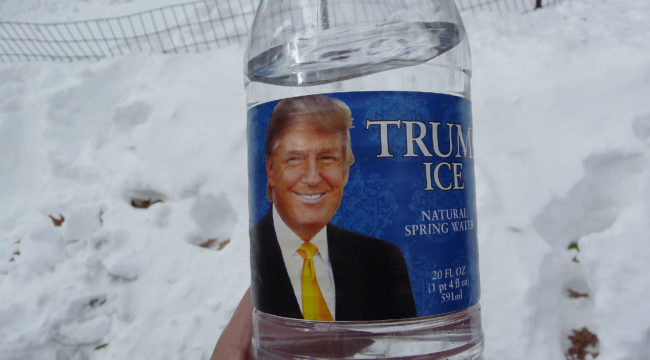 Trump’s Candidacy — the Good and the Bad of It

My book, Trumped! A Nation at the Brink of Ruin and How to Bring It Back,  is no testimonial on behalf of Donald Trump’s candidacy.

Much of what he advocates is wrong-headed or downright reprehensible. But it does salute him as the rallying force for Main Street insurrection because the existing regime of Bubble Finance on Wall Street and statist aggrandizement in Washington threatens incalculable ruin.

In that context, we are mindful that in posturing as an anti-politician outsider Trump has also proven himself to be a rank demagogue. His scurrilous attacks, among other things, on Moslems, Mexicans, minorities, women, political opponents and countless more are frequently beyond the pale — even by today’s rudely partisan standards of public discourse.

Indeed, there has rarely been a political figure in American life who has emitted as much baloney, bombast, brimstone and bile as Donald Trump. And none has ever matched his narcissism and egomaniacal personality. But that doesn’t explain his success.

The Donald’s patented phrase that “we aren’t winning anymore” is what really struck a deep nerve on Main Street. His rhetoric about giant trade deficits, failed foreign military adventures and other shortcomings of America’s collective polity touches that chord.

Indeed, Trump’s appeal is rooted at bottom in voter perceptions that they personally are no longer winning economically, either. The vast expanse of Main Street America has indeed been losing ground for the last 25 years. What is winning is Washington, Wall Street and the bicoastal elites. They prosper from a toxic brew of finance, debt and politics.

Our purpose at this point, however, is to dispel any illusion that Donald Trump — the man and his platform — offers any semblance of a remedy…

In the great scheme of history, The Donald’s role may be to merely disrupt and paralyze the status quo. And that much he may well accomplish whether he is elected or not. For what is actually happening is metapolitical. The bipartisan ruling elites are being Trumped, as it were, by a populist uprising.

Their entire regime of casino capitalism, beltway racketeering and imperial hegemony is being unmasked. The unwashed voters are catching on to the “rigged” essence of the system, and have already become alienated enough to rally to outlaw politicians—like Bernie and Trump — peddling bogus socialism and reality-TV populism, respectively.

To be sure, the metaphor of shock and awe and the idea of “regime change” have been given a bad name by Bush the Younger and his bloody henchmen. Yet there is no better way to describe Donald Trump’s rise and role than with exactly those terms. The current regime arose in the 1980s from Ronald Reagan’s regrettable decision to rebuild the nation’s war machine — along with the GOP’s conversion to Dick Cheney’s “deficits don’t matter” fallacy and Alan Greenspan’s ill-fated discovery of the Fed’s printing press in the basement of the Eccles Building.

Those deplorable, illicit and unsustainable departures from sound policy have subsequently morphed into the full-blown mutant state. Its many deformations are undeniable. They include soaring public and private debts at home; the peace-destroying and fiscally crushing American Imperium abroad; serial financial bubbles that have gifted mainly the 1%; and rampant Beltway influence peddling and a PAC-based campaign finance system that amounts to money racketeering, among countless other ills.

This entire misbegotten regime is now well past its sell-by date. It’s waiting to be monkey-hammered by an unscripted and uninvited disrupter. For at least that role, Donald Trump is eminently qualified. He represents a raw insurgency of attack, derision, impertinence and repudiation.

He’s the battering ram that is needed to shatter the polite lies and delusions on which the current regime rests. If he had been ordered from central casting for that role, in fact, it would have been difficult for Hollywood to confect anything close to the brash, egomaniacal rabble-rouser who now has the ruling elites in a fever pitch of sanctimonious reproach.

It is no wonder they are virtually screeching that he is “unqualified.” Yes, Donald Trump is rude, impulsive and loutish to a fault. That’s why, in fact, his is unsuited for the establishment’s job definition. That is, to preside over another four years of the kind of risible, kick-the-can fantasy-world that serves the interests of our Wall Street and Washington rulers.

The latter would have the left-behind legions in Flyover America believe that everything is fixed and that the financial crisis and the Great Recession were but a random and unrepeatable bump in the night that will never recur. As Obama blatantly fibbed at the Democratic convention, America is already great and America is already strong.

No, not even close.

America is heading for a devastating financial collapse and prolonged recession that will make the last go-round look tame by comparison. The entire recovery is one giant Potemkin village of phony economics and egregious financial asset inflation. It isn’t even a mixed or debatable story. Beneath the “all is awesome” propaganda of the establishment institutions is a broken system hurtling toward ruin.

For example, during the month of July 2016, when the Democrats were convening in Philadelphia to confirm a third Obama term and toast 25-years of Bubble Finance, exactly 98 million Americans in the prime working ages of 25 to 54 years had jobs, including part-time gigs and self-employment. That compares to 98.1 million during July 2000. That’s right. After 16 years of the current regime we have 5 million more prime working age Americans and not a single one of them with a job.

At the same time, the number of persons in households receiving means-tested benefits has risen from 50 million to 110 million. Even as the economic wagon has faltered and become loaded with dependents, however, the financial system has grown by leaps and bounds.

For example, during those same 16 years public and private debt outstanding in America has risen from $28 trillion to $64 trillion. The value of publicly traded equity has increased from $25 trillion to $45 trillion. And the net worth of the Forbes 400 has nearly doubled from $1.2 trillion to $2.4 trillion. In a word, the U.S. economy is a ticking time bomb.

Main Street economics and Wall Street finance have become radically and dangerously disconnected owing to the reckless falsification of financial markets by the Fed and Washington’s addiction to endless deficits and crony capitalist bailouts and boodle. There is not a remote chance that this toxic brew can be sustained much longer.

Under those circumstances the very last thing America will need in 2017–18 when it hits the fan is a lifetime political careerist and clueless acolyte of the state who knows all the right words and harbors all the wrong ideas. Indeed, during the coming crisis America will need a brash disrupter of the status quo, not a diehard defender.

Yet when the Dow index drops by 7,000 points and unemployment erupts back toward double digits, Hillary Clinton’s only impulse will be to double down. That is, to fire-up the printing presses at the Fed from red hot to white heat, plunge the nation’s fiscal equation back into multi-trillion deficits and crank-out Washington’s free stuff like never before.

A combination of a Clinton White House and the devastating day of reckoning just ahead would result in Big Government on steroids. It would also tilt the Imperial City toward war in order to distract the nation’s disgruntled voters in their tens of millions.

Indeed, her prospective war cabinet — including Victoria Nuland and Michéle Flournoy — is comprised of the actual architects of Washington’s unprovoked NATO siege on Russia’s own doorsteps.