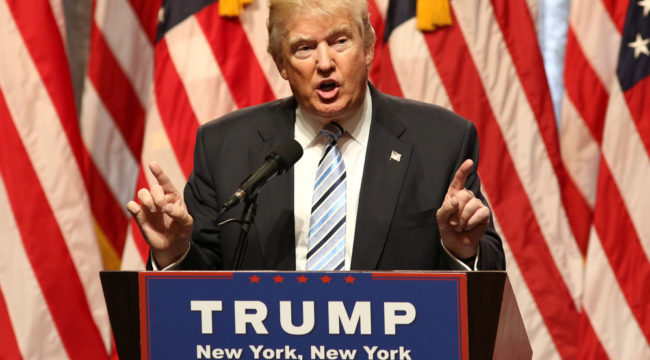 In the great scheme of history, The Donald’s great purpose may be to simply disrupt and paralyze the status quo. And that much he may accomplish whether he is elected or not.

For what is actually happening is beyond political. The bipartisan ruling elites are being Trumped…

Their entire regime of casino capitalism, beltway racketeering and imperial hegemony is being unmasked. The unwashed masses are catching on to the “rigged” essence of the system, and have already become alienated enough to rally to outlaw politicians like Bernie and Trump — peddling bogus socialism and reality-TV populism, respectively.

To be sure, the metaphor of “shock and awe” and the idea of “regime change” have been given a bad name by Bush 43. Yet there is no better way to describe Donald Trump’s rise and role than with those terms.

For at least that role, Donald Trump is eminently qualified. He represents a raw insurgency of attack, derision, poor manners and repudiation. Donald Trump is rude, impulsive and loutish to a fault.

But he’s the battering ram that is needed to shatter the polite lies and delusions on which the current regime rests. If he had been ordered from central casting for that role, in fact, it would have been difficult for Hollywood to produce anything close to the brash, egomaniacal rabble-rouser that is now heading the GOP ticket.

It is no wonder the elites are screeching that he is “unqualified.” That’s because he doesn’t promise another four years of the kind of destructive, kick-the-can fantasy world that serves the interests of our Wall Street/Washington rulers.

Donald Trump’s overwhelming virtue is that he is not Hillary Clinton and does not carry a 30-year-old bag of bad ideas. Hillary’s establishment ideas about how to fix the coming economic and foreign policy crises are so unequivocally bad that Trump’s cannot possibly be worse.

That’s not to say that Donald Trump’s economic policy ideas — to the extent that they are semi-coherent and describable — aren’t plenty dubious. You can find much that is downright  awful in his public statements.

Unfortunately, Donald Trump appears to be an economic blank slate who can embrace any and all errors and delusions. That’s because his economics are purely shoot-from-the-hip. Insofar as it is possible to discern, he has never been troubled by any kind of economic model or coherent philosophy at all.

But that is also his virtue.

“Policy” is what is ruining American capitalism, and the bloated state it has created is what’s gutting political democracy. What needs to happen when the next recession and stock market plunge unfolds is exactly nothing.

If Donald Trump is elected president, there will be no shovel-ready stimulus plan or any other economic policy fix within the first 100 days. Instead, there will be a gong show of such fury and divisiveness as to immobilize the Imperial City indefinitely.

If Hillary Clinton wins, the GOP-controlled House of Representatives will lapse into a partisan killing field for any economic “solutions” the White House may offer.

Either way, both ends of Pennsylvania avenue will end up in political trench warfare.

In a word, the historic virtue of Donald Trump is that win or lose, his candidacy means that the illicit Washington/Wall Street “policy” regime will finally come to a grinding halt.