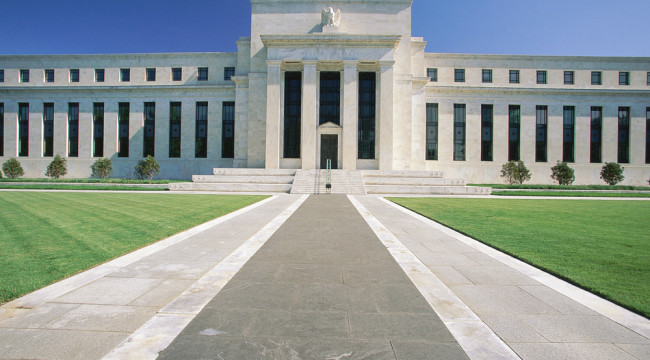 Janet Yellen left interest rates unchanged yesterday. She sees a patient on the mend… but too weak to stand on its own…

Labor markets have tightened, but economic growth proceeds at a trickle. Real household income has increased, but household spending is off. Inflation flickers, sometimes here, sometimes there. But it can’t crack 2%. Exports are soft.

The Fed draws a sketch of neither bust nor boom, but an extended visit from a nagging mother-in-law — not ideal — but generally bearable.

So it did nothing. And suggested only gradual rate increases going forward:

“The committee expects that economic conditions will evolve in a manner that will warrant only gradual increases in the federal funds rate; the federal funds rate is likely to remain, for some time, below levels that are expected to prevail in the longer run.” (Expected by whom? And when does the “longer run” arrive, if we may be so bold?)

How’d the markets take the news?

In stride, one could say. Both the Dow and S&P edged higher on the news. Nothing dramatic, though. Markets had already baked the nonhike into the cake. Oil topped $45 a barrel on news that U.S. production has dropped to its lowest level since October 2014. And expectations of a steady, if not falling, dollar.

Well worth noting: This morning, the Bank of Japan (BOJ) shocked the world by keeping its own rates steady. Experts all believed it would cut rates to stimulate the comatose Japanese economy. All experts but Jim Rickards, that is. He said the world’s leading central banks reached a secret agreement when they met in Shanghai recently.

The plan was to weaken the dollar and the Chinese yuan at the expense of the yen and the euro. According to Jim, “The secret plan devised by the central banks has three parts: Tighten in Europe and Japan, ease in the U.S. and maintain the U.S.-China peg.”

Its purpose is to avoid another Chinese devaluation that could shake the markets, as they did last August and this January. The BOJ’s inaction today makes perfect sense in that context.

Now all eyes turn to the Fed in June…

The futures market is now pricing in a 26% chance of a June rate hike. That’s up a shade from 21% before the announcement, observes CME’s FedWatch group.

“Looks as if we will continue with the ‘slower growth, lower rates for longer’ scenario,” explains Chris Gaffney, president of EverBank World Markets. “Nothing here would indicate a June hike is any more likely than before the statement. Markets are still predicting a hold in interest rates until the end of 2016.”

Be it so. But the Fed stuck a joker in the deck yesterday…

It omitted critical language from its March nonhike announcement that read, “global economic and financial developments continue to pose risks.” Yesterday, the Fed only said it will “closely monitor” global economic conditions. A subtle but potentially significant switch for Fed watchers given to reading tea leaves and studying entrails.

“Their removal of the line on risks is pretty significant,” observed Carl Tannenbaum, chief economist at Northern Trust Corp. and former Fed understrapper. “That might reflect increased comfort on the committee that global influences appear more manageable.”

The Fed’s now passed three times this year after predicting four 2016 rate hikes. If it doesn’t raise in June, it might as well hoist the white flag of surrender. The next plausible date would be December…

Yellen won’t likely tinker with rates in September, because it’s too close to the November election. Yellen’s a Democrat from UC Berkeley. Raising rates could result in a market sell-off — and possibly put Trump in the White House. As Jim Rickards explained, Obama recently summoned Yellen to the White House to deliver a highly public message — “No rate hikes!”:

Obama does not want the Fed to raise rates. If the Fed remains on its path of interest rate hikes this year, it would give the Republicans the strongest chance at the White House in this fall’s election. That’s because rate hikes would likely lead to recession, and that would bode poorly for the Democrats.

Tough to imagine Yellen handbagging Obama over the head with a September rate hike. Nor could she cut rates in September, even if conditions warranted. Politically, she can’t be seen as putting her thumbs on the scale. Caesar’s wife must be above suspicion, after all. Jim again:

A rate cut in September 2016 will be politically impossible coming just 48 days before the U.S. presidential election. Yellen is a well-known liberal Democrat. Any effort by her to boost the economy (via portfolio channel effects) just before the election will invite a withering political backlash from the Republican nominee.

That Republican nominee may well be one Donald J. Trump. If Trump’s somehow elected this November, he’s suggested he’d replace Yellen as Fed chair. But maybe he’d be better off leaving her in…

They say hell hath no fury like a woman scorned. Now, we’re not suggesting she will. But what if Yellen jacks rates up to a Paul Volcker-like 20% on her way out… just to spite The Donald?

“Ha, try making America great again now, jack. And you thought the president was the most powerful man in the country…”

He’d be sunk in a month.

In his essay, David Stockman shreds Donald Trump’s likely opponent in this year’s presidential election. As usual, he gives it with the bark off. Read on, unless you’re a Hillary Clinton supporter.