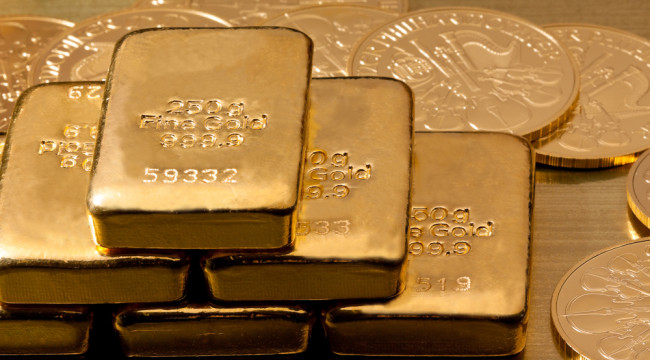 What Most Gold Bugs Don’t Understand

“There’s mounting evidence this gold rally could have legs heading into the summer,” says Greg Guenthner of our trading desk.

But Greg’s approach to every asset class is the agnostic one. When the charts turn, he turns.

“No one was paying attention when gold started ticking higher in January,” Greg writes by way of update this morning. “A false breakdown at the very end of 2015 is what caught everyone off guard.”

“Gold was locked in a nasty downtrend. Another breakdown was just par for the course. 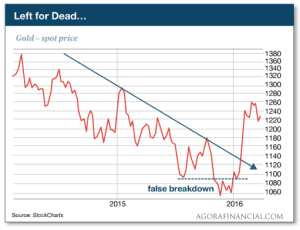 “As most folks proficient in the ‘chart arts’ know, from false moves come swift moves in the opposite direction. Once gold regained its footing to start the year it was off to the races. The disbelief rally had begun. And it’s still going strong.”

Going forward, Greg sees dual catalysts for gold as spring moves toward summer — dollar weakness and a growing realization the Federal Reserve has no clue what it’s doing (about which more shortly).

“Gold’s rise won’t be picture-perfect,” he concludes. “Expect wild swings and plenty of shakeouts. Comeback moves are never clean or easy. But they are powerful.”

But what of the “ultimate” catalyst for gold, an X-factor we identified in early 2013 even as gold was nose-diving?

Back then, we described the potential for a scenario our executive publisher Addison Wiggin labeled “Zero Hour” — a moment when demand for physical metal would far outstrip the “paper gold” market of gold futures traded on the Comex in New York.

Since 2014, the momentum toward “Zero Hour” has been building relentlessly. Only last month, Byron King explained in this space that for every ounce of physical metal held by the Comex, there are 500 traders holding gold futures.

For the time being, those traders are content to roll their contracts forward or take a cash payout when those futures expire. But hypothetically, they have the right to demand delivery in physical metal.

The key word there is “hypothetically.” A lot of Internet screamers don’t understand the subtleties of “Zero Hour.” A lot of their followers wonder what the hell’s taking so long.

“If every long in the futures market put in a notification that they wanted to take physical delivery instead of closing out or rolling over their contracts, the result would be one of the greatest short squeezes and price spikes since ‘Big Jim’ Fisk and Jay Gould tried to corner the private gold market in 1869. (Fiske and Gould’s corner failed when the U.S. Treasury unexpectedly made public gold available to bail out the shorts.)

“But this scenario is unlikely to play out in the way the gold bugs wish, for several reasons,” Jim goes on.

“The first is that the Comex has emergency powers to prevent longs from taking delivery in a way that disrupts the orderly functioning of the market. The Comex rule book makes it clear that a futures exchange is for hedging, price discovery and legal speculation, but is not a source of supply. (Physical delivery is permitted, but only enough to keep the paper price ‘honest.’ The irony, of course, is that the paper price is anything but honest, due to manipulation.)

“Another rule allows Comex officials to change the rules as needed in emergencies (something the Hunt brothers experienced when they tried to corner the silver market in 1980). The fact that longs know they cannot take delivery in the end is a major deterrent to the attempt.”

So a rogue hedge fund manager out there might want to call BS on the whole Comex scheme… but he thinks better of it, lest the full weight of Uncle Sam’s prosecutorial apparatus comes crashing down on him.

If someone demanding delivery of physical metal from the Comex doesn’t bring on “Zero Hour,” what will?

It comes back to “avalanche theory” — Jim’s popularization of the science called complexity theory.

“What this means is that the super-spike in gold prices will not come from any of the obvious sources but from an unexpected source.”

It could be the bankruptcy of a medium-size gold dealer. It could be lawmakers in Washington talking about new reporting requirements for gold dealers. Or it could have nothing to do with gold: It could be a war or a pandemic that frightens people into safeguarding wealth.

“It doesn’t matter,” Jim sums up. “Once the avalanche begins, there’s no stopping it.

“At that point, the hedge funds can demand physical delivery of gold without fear of prosecution. If a hedge funds tries to start an avalanche, it’s manipulation. But if the avalanche starts from another source, then a hedge fund piling on is ‘normal’ market conduct.

“Since every gold market participant knows there’s not enough physical gold to go around, everyone will demand physical gold at once. No one wants to be left holding the bag.”

As it happens, one of Jim’s contacts in the gold market — the head of the world’s largest gold refinery, located in Switzerland — has identified a potential near-term Zero Hour catalyst. “I know of no single individual in the world with a more detailed working knowledge of physical gold flows,” Jim says.

This coming Tuesday, Jim is holding an online workshop exclusively for people who buy a copy of his latest book, The New Case for Gold through Agora Financial. Jim will share the insights of this insider’s insider. “When the buying panic hits, gold will soar past $2,000 per ounce (if it’s not there already) and spike to $3,000 per ounce, then higher, in a matter of weeks or months at most.”

This workshop is one of many pluses you get by ordering The New Case for Gold through us. Your hardcover copy of the book will have a bonus chapter. It will be signed by Jim. You’ll get a 60-day no-obligation trial of Rickards’ Strategic Intelligence. And all we ask is $4.95 to cover shipping for the book — less than a third of what you’d pay buying the book from Amazon, and you get none of those bonuses.

[Time-sensitive announcement: This offer comes off the table Monday night at midnight, because the book’s formal publication date is Tuesday. If you want in, time is limited. Here’s where to act.]