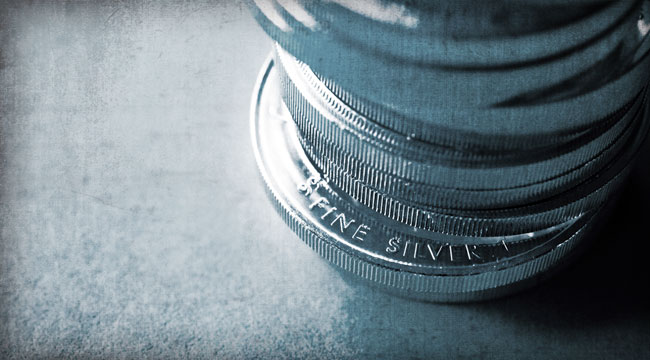 4 Ways to Make a Fortune With One Precious Metal

The “metal of the moon,” as ancient Egyptians called it, has had a tough two years. Another way to look at it, though, is that there’s strong evidence we’re in the midst of a phenomenal buying opportunity.

What to do? Buy or wait?

Let’s think it through, and start with the silver price chart… 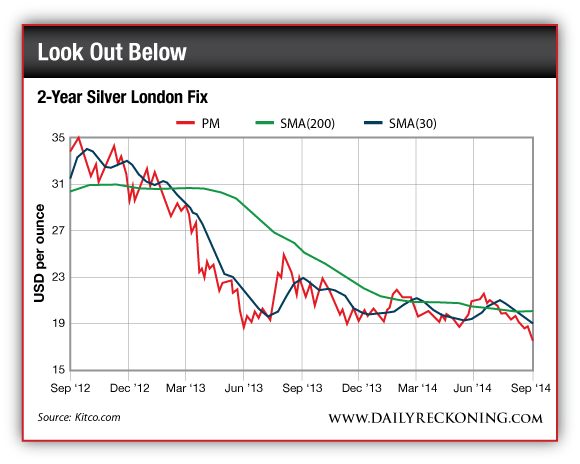 Yet the chart also shows the 200-day moving average for silver is flattening out in the $20 range. That’s a hopeful sign.

Still, the fact is that recent price actions have been downward for silver. In recent weeks, prices cracked the $19 level; and then dipped under $18. How low can silver go?

To answer that question, I went to Toronto, earlier this week. I had the pleasure of spending a day with Eric Sprott, his associates and a small group of “metal guys” from across a spectrum of newsletters and research groups.

To most policymakers, bankers and investors, “gold is the antichrist to their precious dollar.”

The Sprott organization is one of the savviest of savvy metal-investors. At the mast-head of the ship, you’ll look long and hard to find any captain with more encyclopedic knowledge of silver than Eric Sprott; and his knowledge is reflected amongst those with whom he works day to day.

Mr. Embry has been following gold and silver markets for over 45 years — indeed, as he told me during a conversation over one of the breaks, he’s been “doing gold and silver” since before Pres. Nixon took the U.S. off the gold standard in August 1971. Mr. Embry has seen every kind of market — up, down and sideways.

Right off the bat, Mr. Embry stated that the average cost per ounce of new silver is in the range of $22 to $25 per ounce, delivered from the mine. “At current prices, I cannot see how miners can keep delivering product at a loss.” He noted, to be sure, that some silver comes as a by-product of lead, zinc and copper production; and those mining groups may not be as sensitive to pricing. “But at some stage,” he said, “economics will return to the driver’s seat, and production will have to tighten.”

Right now, Mr. Embry explained, he has “never seen more negative sentiment towards precious metals.” In other words, it’s as bad as it has ever been. In fact, one of the worst, compounding issues is that three generations of people — especially in Western economies — have grown up and now live blissfully under the “dollar standard.”

“People are invested backwards,” declared Mr. Embry. To most policymakers, bankers and investors, “gold is the antichrist to their precious dollar.” Indeed, the great mass of people simply cannot wrap their brains around the idea that currency in their pocket or bank account needs any sort of “backing.” Yet, declared Mr. Embry, “If the dollar gives way against precious metals, U.S. living standards will collapse.”

According to Mr. Embry, economically, “the world has reached a hopeless situation.” That is, the great mass of people — certainly voters — live comfortably with bottomless levels of government debt, endless growth of government indebtedness and fiscal and monetary chicanery cannot end well.

Mr. Embry expects silver and gold to reach “unimaginable prices” when the big crisis hits, but until then he said, “I look like a dope.”

So what’s Mr. Embry’s defense mechanism? Some portion of your portfolio must be invested in precious metals, especially silver. “This is the finest opportunity I’ve seen in my career,” he said.

“Silver is a potential 10-bagger from here… Eric thinks we’ll see 30- and 40-baggers with silver.”

Mr. Embry believes that investors’ wealth will be protected by owning physical silver; and fortunes will be made in silver miners. “Silver is a potential 10-bagger from here,” he noted; then quickly nodded to Eric Sprott, sitting in a corner, and reminded everyone that “Eric thinks we’ll see 30- and 40-baggers with silver.”

Among the great virtues of these funds, they’re tightly regulated and audited; plus they store physical metal in the Canadian Mint, a government facility with ZERO chance of ever going bankrupt or being seized by someone else’s judicial process.

If you don’t own physical metal, get some. Accumulate over time; don’t blow all of your seed corn in one fell swoop. Then, for investors who don’t want to hold “too much” physical metal in their home, safe, local bank, secure storage or such, these Sprott funds are all excellent ways to “buy physical” without actually holding the bars in your hand.

Over the course of the day at Sprott, we went over a number of silver mining plays as well; I’m reviewing those names by my own standards. I’ll have more to say soon…

For now, though, the mining and investment landscape is littered with the corpses of ideas that have had the dog-gone tar kicked out of them. Yet some of these ideas hold strong assets, and are well-capitalized. Opportunities are there, if you know where to look.

P.S. In addition to buying PHYS and PSLV, I strongly encourage reading my newest colleague, Jim Rickards’ dire forecast. He agrees that you should own some silver plays — especially when America’s “spooky” new money is adopted. I gave readers of The Daily Reckoning email edition a chance to discover this new money for themselves in today’s issue. It was part of our larger discussion about the looming panic in the currency markets — a valuable conversation if you were lucky enough to be a part of it. If not, we suggest you click here and sign up for the Daily Reckoning, for FREE, right away.