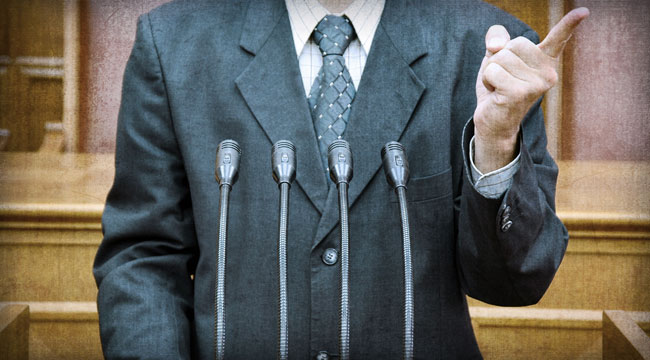 4 Ways the Government Is Set to Take Your Money

“Persons traveling with more than $10,000 worth of currency or monetary instruments must declare their holdings to Customs and Border Protection under penalty of perjury.”

That’s exactly what it states, in powder blue ink, on the card that airline flight attendants hand to you, before landing at international airports across the U.S.  So imagine this…

It’s 3 p.m. (NOTE — Int’l flights from Europe usually land in the afternoon)  in Newark Liberty International Airport, and a respectable-looking American woman is returning from a trip to Switzerland.  She was visiting Zurich, on business, with a little bit of tourism on the side.

This business-traveler/tourist returnee is a good person, from all appearances.  She’s married, with children; has a job; pays taxes; no criminal record; heck, not even a traffic ticket.  She’s the nice lady next door, basically.

But right now, this nice lady is about to  commit a long string of  felony crimes, all because she wants to protect her privacy and wealth from the watchful eye of Big Brother.

“Reason for your visit to Switzerland?” grunts a surly customs official, who clearly has not had enough coffee this afternoon.

“Business,” she replies  nonchalantly. “And a little bit of tourism.  Saw some sights.  Rode a train through the mountains.”

That’s the trick, as a rule. Say a few things, but don’t run your mouth; talkative is a tip-off.

She’s talking, and saying enough for the Customs guy to get the picture that she’s an established person; but she’s not saying too much.  That’s the trick, as a rule.  Say a few things, but don’t run your mouth; talkative is a tip-off.

What’s at stake here?  Well, there’s  a tidy sum of wealth in play, picked up on a short trip to the Zurich Cantonal Bank, home to more than $5.4 billion in gold. Hold that thought…

The iconic skyline image is one of free enterprise; but today, at Newark Airport, America is not  so free anymore.  Why not?

Well, today this particular American citizen is walking past a U.S. Customs official with over $100,000 worth of gold on her person.  That is, she’s carrying 80 ounces — five pounds — of refined gold bullion in her purse.   Good thing she has upper arm strength, from doing Yoga, right?

What’s going on here?  Why the secrecy about carrying gold bullion from Switzerland to the U.S.?  Something wrong with Swiss gold?  Is Swiss chocolate next?

Well, today it’s gold; tomorrow it may be chocolate.  But here’s the point.  This story is entirely  hypothetical — I’m not aware of anybody sneaking gold bullion past U.S. Customs; but the story is also a sign of the times.

The U.S. government, along with other Western countries and innumerable banking institutions,  is starting to make it very difficult for regular citizens — you,  me and the nice lady next door — to  move money.

In other words, we’re  living in an ever increasingly “capital controlled” environment.  You can’t move money, and other things of value, without telling the government about it, if not several governments.  Big Brother is watching… certainly over your money and other wealth!

So today,  we’ll talk about the big picture — capital controls: what it means to your finances, your ability to preserve wealth and, importantly, what it means for precious metals like gold and silver.

Here’s a question for you: Is the U.S. economy better off now than 10 years ago?

If you said yes, let me ask you another question…

Are we twice as well-off as we were 10 years ago?

Well, since 2004, our national debt has more than doubled. Going from $7 trillion in the hole to over $17 trillion.

The U.S. government has been spending and printing at the greatest clip in our nation’s history.

And besides a timely energy boom (that the U.S. government had nothing to do with, by the way), the economic recovery isn’t much more than printed cash and promises.

So if you think we’re better off today, you may very well be living in a fool’s paradise.

This false recovery is the perfect breeding ground for unsustainability.

As co-editor Matt Insley puts it, “I think it’s obvious the only way to cure our unending debt is by printing more dollars, lowering the long-term value of the dollar.”

Soon, we may be standing at a crossroads, a point at which the government will have to take more intrusive action to sustain their spending habits, or else face the possibility of a default.

In essence, capital controls enable governments to limit the flow of money coming in and out of their country in the hopes of manufacturing conditions that protect the value of their currency. As we reach a fiscal tipping point, we could very well see our government revert to making use of capital controls.

Here are four specific ways they might choose to do so.

1.Tax foreign investment. This would not be the country’s first venture into capital controls. From the 1960’s into the ’70s, interest rates abroad were much higher than rates at home, and the dollar was suffering as a result. Understandably, Americans began to pour their money where they could net higher returns, in foreign investments. Washington reacted by passing the Interest Equalization Tax in 1963. The tax on foreign investment was meant to be a disincentive for Americans to purchase foreign assets, keeping dollars at home. After 11 ineffective years, the tax was repealed. Interestingly enough, the price of gold jumped from $35.09 to $154.00 during this time.

Economic conditions of today are markedly similar to those of the late ’60s and early ’70s. This could prompt the government to levy a tax on foreign investment. 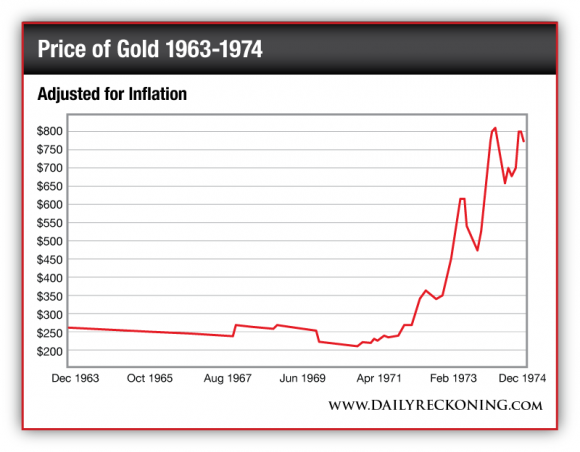 2.Increased income tax. Quite simply, we could see the government reach into our pockets with a hike in income tax rates to compensate for the massive debt. Someone has to foot the bill for the trillions of dollars of debt, which is estimated to be about $151,000 per taxpayer. Don’t be surprised if the buck gets passed to you on April 15. It’s not as if doing so would be abnormal — tax brackets have been widened across the board three out of the past five years. Just last year, our administration introduced another tax bracket subject to a tax rate of nearly 40%. All the more reason to diversify away from the dollar and simple cash income strategies.

3.Tax on gold. In response to economic turmoil, some countries have moved to discourage what can truly threaten their currency when it is weak, investment in gold. India has tried to counteract crushing debt by placing a 10% tax on gold imports. The tax isn’t stopping citizens from bringing gold into the country, as evinced by the 750% jump in gold smuggling arrests since last year. Keep an eye on the U.S. stance on gold taxes. The government could very well employ a gold tax to protect the value of the dollar as it is in decline.

4.Bail-in. You’ve heard of bailouts, where outside investors provide funds to prevent a business from failing. Well, now prepare yourself for bail-ins, where the borrower, in this case sovereign governments, converts money owed to creditors, i.e., taxpaying citizens, into cash. For example, depositors with savings above 100,000 euros in Cyprus’ two largest banks had much of their cash holdings converted into Bank of Cyprus shares. Basically, the government converted bank holders’ funds to government bonds to fund reckless spending. Watch out for the threat of bail-ins if things get any worse economically.

For now, you don’t need to smuggle gold into the U.S. to invest in a safe asset. There is a much simpler way of hedging against the certain devaluation of the dollar. A way that keeps your wealth from being under the government’s thumb.

Sprott Physical Gold Trust is different from most gold ETFs. You see, unlike most gold ETFs that are merely a gold derivative — trading paper that gives you the right to claim some gold held by some institution somewhere — Sprott actually backs your shares 100% with gold bars in their own vaults, earmarked just for your account!

You can sleep soundly at night knowing that your investment in gold bullion is kept in a secure storage facility in Canada (Sprott’s gold bullion is stored at a third-party facility), not by a levered financial institution. Sprott’s gold is not exposed to the risk of being absorbed by bankruptcy or a bank nationalization. It’s safe in Sprott’s vaults, not being speculated with or loaned out.

Normally, you’d expect a substantial cost to come with assurances that give you peace of mind. Not so fast. Sprott’s management fee is a measly 0.35% per year. Furthermore, shares of Sprott Physical Gold Trust are taxed at long-term capital gains rate of 15% instead of 28%, the rate of most gold ETFs.

And here’s the kicker — you can have your share of gold delivered to your front door! Ownership of physical gold, the ultimate act of hedging, guarantees your wealth is free from the depreciating dollar and the grubby hands of the tax man.

A storm is approaching from off in the distance. Don’t be the last one to start building their shelter.

P.S. If you want to keep the upper hand in the battle for preserving your wealth from government intervention then The Daily Reckoning FREE online newsletter is the perfect opportunity for you. Click here to sign up today and never miss a beat.