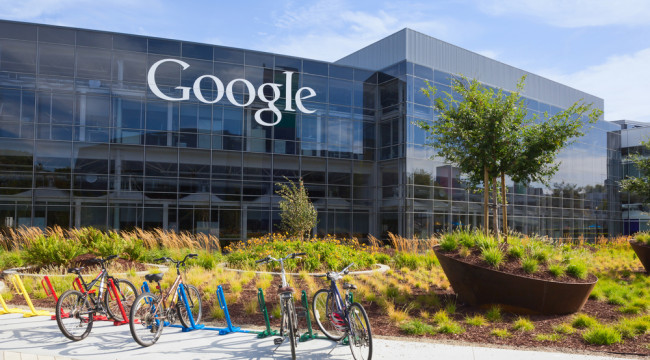 When you stop and consider all that Google has accomplished in recent years, it almost starts to sound like a re-run of The Jetsons.

…What could be next? 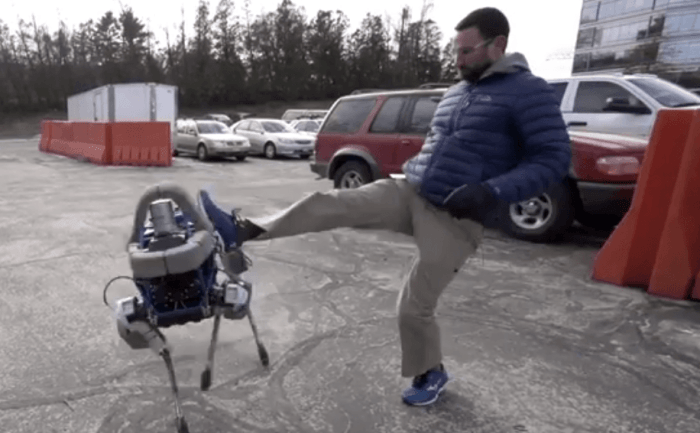 After purchasing Boston Dynamics in a robotics spending spree in 2013, Google unveiled its latest dog-like robot – fittingly named Spot – designed for use inside buildings and on rough terrain, back in February.

The four-legged machine can scale wooded hills, climb stairs, run (on surfaces like ice, too), and even stays standing when you try to kick it over. Check it out here:

And since then, Google has upgraded Spot to “BigDog,” who now sports an arm powerful enough to lift and throw concrete blocks:

BigDog was originally designed for military use to help soldiers pick up and carry heavy loads, but the possibilities are endless. BBC News reports:

The mechanical “dog” is already able to move about a varied, rugged terrain while carrying a load. It can perform simple tasks and obey voice commands.

Chris Melhuish, director of Bristol Robotics Laboratory, told the BBC it was “a phenomenal piece of technology”.

“It’s cost a lot of money, but you tend to spend a lot of money on first prototypes, and later on as these things get rolled out, they get cheaper,” he said.

He added that the robot’s ability to follow a person made it “an interesting navigation machine which might end up useful in other domain, such as search and rescue”.

“[Imagine] setting off these units across a rough terrain if they were looking for a lost child or a walker on a mountainside.

“I think the potential is enormous – from pets to robots that are going to help you move your shopping, to a robot on a building site that’s moving bricks from one place to another, following a bricklayer around.

“I wouldn’t be surprised if they could even do sport one day – such as robot racing.”

Freaking you out yet?

Well, I’ve got news for you: they’re nothing compared to Google’s Atlas Robot, which debuted earlier this month.

This humanoid robot stands at 6 feet, two inches tall and weighs a staggering 330 pounds, and was designed to replicate – or even improve upon – the way humans and animals naturally move.

Boston Dynamics firm pledges that Atlas will soon be more agile than a human. It’s a little spooky, but you can watch video footage of Atlas’ performance here: 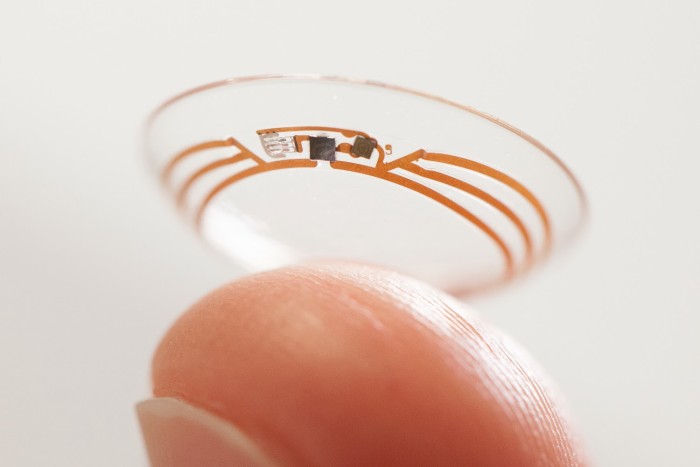 On Monday, Google Inc. stated that its health-care research unit reached an agreement to work with European pharmaceutical major Sanofi SA on new ways to treat and monitor diabetes. The Wall Street Journal has the story:

Sanofi is a leading maker of diabetes medication, as well as many other drugs. Google’s Life Sciences division is working on small, connected medical devices to continuously collect diabetes-related data, as well as software that learns from the information to find new treatments. Diabetes is expected to affect 592 million people world-wide by 2035, according to the International Diabetes Federation.

Google Life Sciences, led by Andrew Conrad, started about two years ago as part of the company’s ambitious goal to expand beyond its Internet search roots into big industries such as health care and transportation. Some of these efforts have stumbled, but Google Life Sciences has made steady progress through in-house research and partnerships with companies such as Novartis AG and Biogen Inc.

The life-sciences division will become a stand-alone unit in Google’s planned reorganization into a holding company called Alphabet Inc.

Some of the coolest sci-fi sounding developments in store?

A Google-designed contact lens that measures the glucose level in tears of diabetics, as well as a cheap, disposable device the size of a Band-Aid to be worn on the skin to send blood-sugar measurements to a smartphone.

Next, from health-care to home-care… 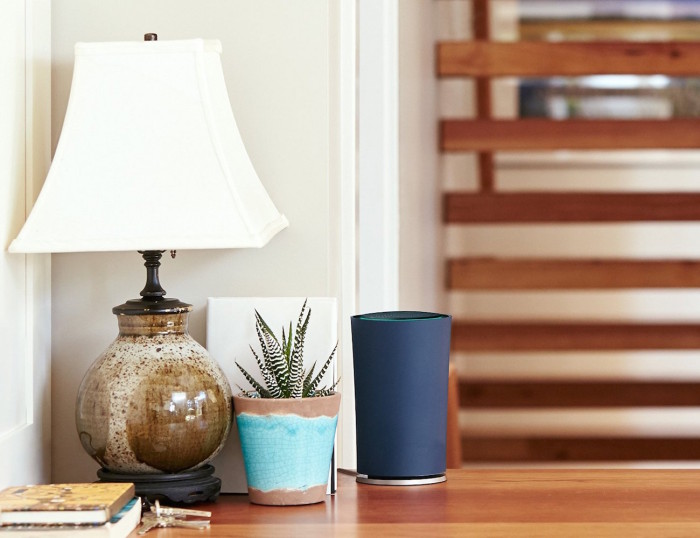 If you’re like us, you don’t spend time thinking about your wi-fi router… unless it’s acting up again or you trip over the unsightly wires. Enter Google, yet again.

The search engine aims to revolutionize home networking, having just released their OnHub smart router for sale today. It fetches for a whopping $200.

The design is attractive and sleek with 360 degrees of antennas and a speaker. It also offers what The Wall Street Journal called “the best wireless networking my home has ever seen.”

Here’s the WSJ with more:

The router business has been in a bit of a funk. Cable companies and other Internet service providers now rent their customers basic Wi-Fi routers when they sign up for service. As a result, U.S. router sales have fallen from 6.1 million year-to-date in 2012 to 3.5 million in the same period this year, market research firm NPD reports.

Yet while many people are satisfied with their cheap or rented router, a segment of the population is starting to realize they need something better, for three key reasons: They’re connecting more and more gadgets to their home networks, they’re streaming more video than ever before, and they’re paying for increased bandwidth, upwards of 100 megabits per second, which only gets choked by a sub-par home network.

“I don’t think anybody gets a state-of-the-art router from their ISP,” said Stephen Baker, NPD’s vice president of industry analysis for consumer electronics.

Google has the most knowledge of how much people are using the internet and what they’re doing. With more and more people willing to shell out for better performing routers, Google may be onto something here…

It intelligently monitors the Wi-Fi channels around your house, looking for airwaves that are clear from, say, your neighbor’s Wi-Fi noise. You can prioritize certain gadgets so they get uninterrupted streaming.

You can run a check-up within the app that tests both the quality of the Wi-Fi and the connection from the router to your service provider, so you can see if a problem is in or outside the home. You can quickly look at all the devices on the network, and identify the biggest bandwidth hogs. 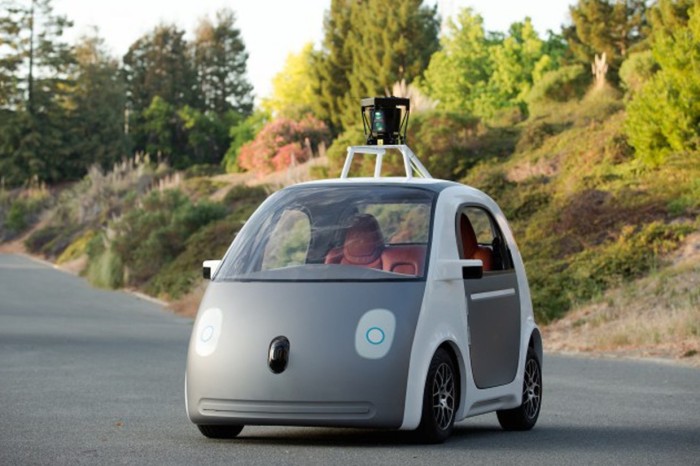 Innovation #4: “Hey! There’s no one driving that car!”

About a month ago, our own Stephen Petranek (former editor-in chief of Discover Magazine) reported on Google’s growing fleet of autonomous cars:

In mid-June, the California Department of Motor Vehicles released a list of autos that are driverless and registered with the state. Google now has 48 such vehicles that have driven 1.1 million miles autonomously.

Now, Google is expanding beyond the Golden State. They have begun testing its self-driving technology in Austin, TX, too. According to KXAN, Texas is the fifth state to legalize driverless cars, following in the footsteps of California, Florida, Michigan, and Nevada. 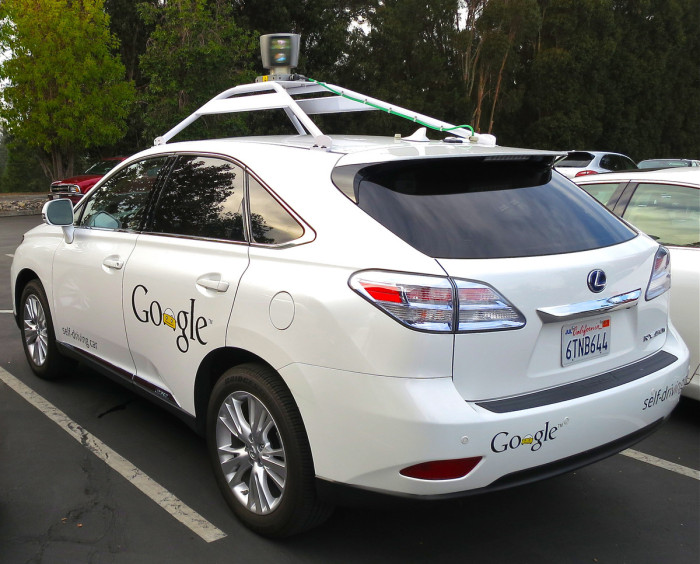 When you see this Lexus SUV cruising around you’ll know not to bother looking for a driver behind the wheel.

The cars have performed remarkably well so far. They have only been involved in 14 minor collisions — all of which were the other driver’s fault.

Minus one small glitch with a fixed-gear cyclist attempting a track stand, the cars are also attuned to respond to deer, even at night.

The reality of the flawed human driver is still very clear: humans text and drive, humans zone out and become distracted, humans miss their blind spot and cyclists.

Google’s new self-driving cars could not only help those who have lost the ability to drive regain their independence, but it could also save lives some of the more than 30,000 lives lost in traffic crashes in the U.S. each year.

Watch this video to get a sense of what it might be like to ride in a driverless car:

Did we miss anything? Let us know in the comments section below…

P.S. Be sure to sign up for our free tech e-letter Tomorrow in Review. When you do, Stephen Petranek, former editor-in chief of Discover Magazine, friend of Elon Musk, and TED Talk speaker with over one million views, will write to you each day about bleeding edge technology that’s set to transform your life, work and investment portfolio. Signing up is free — click here now to subscribe!