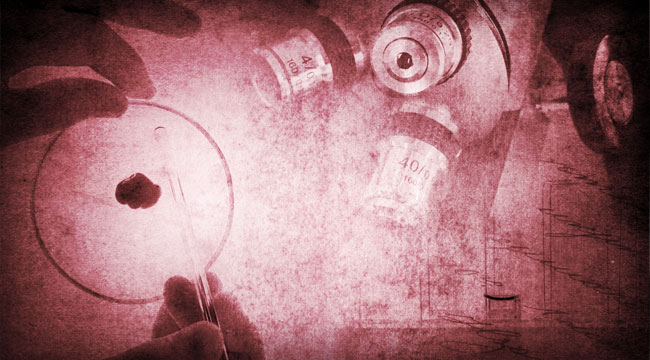 [Ed. Note: We’ve shared several stories recently about the upcoming bull market in biotech stocks. From a practical side, as well as a technical side… But there’s still a stigma around this market, that’s it’s too risky to bet on, right now. Below, Thompson Clark describes two simple ways to find great, hidden value in this market before it takes off.]

Last week, I attended a fairly exclusive investing conference. And while there, I had a fascinating one-on-one conversation with a whip-smart CEO of a biotech company. He has his Ph.D. in mechanical engineering. So you know this guy knows what he’s talking about.

He gave me two ideas that might generate some big biotech profit opportunities in the coming months. What he said really kicked my brain into gear.

Let me explain why…

See, the crazy thing is this CEO considers himself a value investor. Now, if you know much about biotech investors, that sounds ridiculous.

Biotech stocks can swing wildly — anywhere from 25-75% overnight. You take some big gambles.

More often than not, Phase 3 drugs sell for Phase 1 prices.

But value investing is the opposite. Value investors like us find hidden treasure in the stock market. They find million-dollar houses selling for half off.

So how could this CEO consider himself a value investor? That’s exactly what I asked myself.

As we talked more, it started to come together for me… a light bulb went off in my head.

It has to do with how people misprice the value of drugs getting FDA approval.

A company goes through four phases with the FDA to get drug approval. It’s during these phases researchers prove the drug works. Each phase is harder and harder to pass. The goal is to pass all the steps and get FDA approval. Once approved, the company can sell the drug and get rich!

The further along the company is in these phases, the more it should be worth.

But here’s the kicker.

More often than not, Phase 3 drugs sell for Phase 1 prices.

Now, my CEO friend gave me the rundown on these phases. What you need to know is once a company reaches Phase 3, as he explained, approval is almost guaranteed. But unbelievably, the market sometimes fails to account for this. The stock could be in Phase 3 — yet “valued” like it’s in Phase 1!

In other words, we’re buying a potential bar of gold for the price of a lump of coal.

Now, that’s exactly the type of opportunity I’m on the lookout for.

This is a textbook example of market inefficiency.

However, there are many cases where it’s the exact opposite. Company A — the cheaper of the two — will have a better drug and higher degrees of FDA approval. But it will trade at a huge discount to Company B.

Most stock buyers don’t understand how to value a biotech company. So the companies that promote themselves can do really well at first, while the quieter, science-based companies are hidden treasures Wall Street doesn’t have on its radar.

Basically, after a company is approved for Phase 3, you’d think everyone would be excited. But the truth is a lot of these Phase 3 companies slip completely off everyone’s radar because they don’t have a slick-talking CEO to promote them.

And that’s great news for us.

Situations like this can hand us enormous profits — safely. We’ll want to invest with the smart guys and avoid the promoters. This gives us limited downside and potentially unlimited upside. And you can take this to the bank — I’ll be spending a lot of time sniffing out these opportunities for you in the months ahead.

I’ll keep you in the loop as I do my detective work.

Ed Note. In today’s issue of The Daily Reckoning email edition, Thompson opened the doors to his elite research service… But he only opened it a crack… allowing only a handful of lucky readers in for a very limited time. If you’d like the opportunity to get in on incredible services like Thompson’s, you have to sign up for The Daily Reckoning, for FREE, right here.