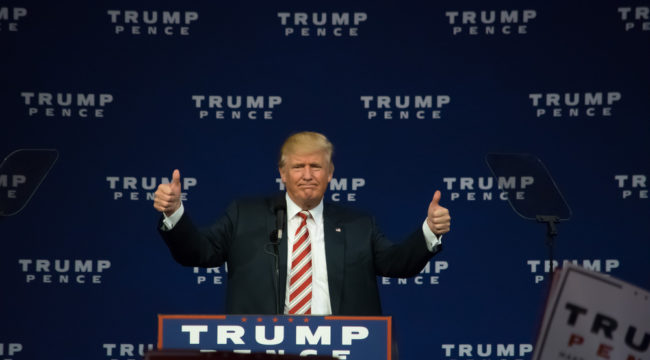 What does history predict for the Trump presidency?

A double-digit market correction. And a likely recession…

Every two-term president since the early 1970s ended up with a double-digit market correction at the end of his watch. The prosecution presents the following as proof thereof, courtesy of Zero Hedge: 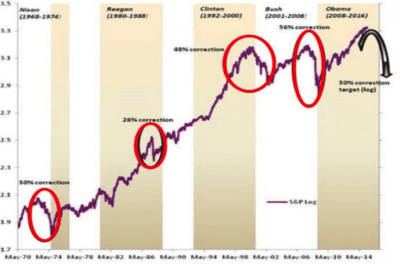 Note the top right arrow nosing earthward. It suggests Trump’s facing a possible 50% correction in the near future.

But is a double-digit correction etched in granite?

No, not necessarily. Markets — the Fed, really — have worked a schizophrenic break from reality since 2008. Maybe the rules have changed. Maybe the Fed can juggle its way out of it this time. Maybe, maybe, maybe. But if history doesn’t always repeat itself, it does rhyme, as the saying has it.

Trump plans to open the national purse on infrastructure, defense and other rich candy. And he’s pledged to cut taxes, to boot. Out of this bowl of sweets could very well come inflation.

That’s why yields on longer-term bonds such as the 30-year Treasury have jumped post-election. If they’re going to keep their bonds, investors demand more compensation to keep up with expected inflation. Hence the spike in bond yields.

Russell Clark is a portfolio manager at Horseman Capital. Zero Hedge notes Clark finds that “Sharp yield spikes have preceded every major crisis in the past 20 years” (hint: that’s a financial crisis). Here’s Clark himself:

The problem with sharply higher U.S. bond yield is that this tightens financial conditions. We have often seen rises in yield coincide with financial market crises.

More recently, bond yields rose in 2006 before the global financial crisis, and again in 2010–2011 before the Euro crisis. There was also a rise in yields before the crash in oil prices in 2014.

Is the spike in bond yields proof of impending correction? We don’t know. But it’s sure something to keep on file.

OK… how about a recession?

Raoul Pal — no, not the drag queen — used to honcho one of the largest hedge funds in the world. These days, he heads Global Macro Investor, an independent research firm with oodles of heavy-hitting fans.

And according to Mr. Pal, via a Yahoo Finance headline, “History Shows There’s a 100% Chance of a Recession for Trump.”

Not 90%. Not 99%. But a 100% chance of recession. And like the correction talk above, it also centers around two-term presidencies. Two-term presidents do their successors an evil service:

Pal can’t explain it for sure. But he thinks in some way the political cycle drives recessions. Maybe it takes two terms for presidential mischief to seep its way into the marrows. One-term presidents just don’t have the time. Who knows? But his research points him to one conclusion:

“It is not a coincidence.”

Add up the figures and Trump could be strutting into a whipsaw. He is, after all, following a two-term president. History says a thumping 50% market correction and/or a good stiff recession lie ahead.

The assembled evidence against two-term presidencies has us rethinking the 22nd Amendment to the United States Constitution. The one limiting the president to two terms.

Our take: If it takes a president two terms to work up a good recession, he should jolly well face the firing squad himself. Don’t leave the next guy with your mess.

We’re not drummers for Trump… But if the president-elect gets waylaid as history suggests, you can just bet we’ll be whistling hard for an immediate repeal of the 22nd Amendment.

A fellow should reap what he sows. It’s only fair.