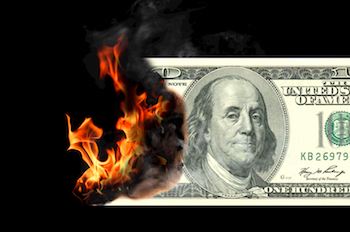 “From time immemorial proverbial wisdom has taught the virtues of saving,” wrote Henry Hazlitt, “and warned against the consequences of prodigality and waste.”

Hazlitt authored his masterly primer on economics, Economics in One Lesson, in 1946.

Yet he etched it in the rock of ages with its timeless insights.

Today these theorists invade us, batter us and torture us ceaselessly… like a thousand alarm clocks joined in hellacious chorus.

Yesterday we alerted you to the latest assault upon savings — negative interest rates.

During economic stress, negative interest rates would crack open the piggy bank… and spill its contents into the productive economy.

This is the way to recovery, say its drummers. And savings are in the way.

But today we leap to savings’ defense. We illustrate why savings are a blessing at all times, in all seasons…

The Virtue of Savings

But in dark times saving locks needed capital out of the productive economy.

Investment, meantime, answers a higher calling. It is publicly minded. It pitches in… and expands the economy.

The central bank must therefore suppress savings to increase spending… and investment.

Negative interest rates, they claim, are one solution.

The more accumulated savings in the economy… the more potential investment.

An economy built atop a sturdy foundation of savings is a rugged economy, a durable economy.

No passing gale will knock it over.

Consider for example the frugal farmer…

He has deferred present gratification… and stored up a full silo of grain.

There it sits, seemingly idle.

But this silo contains a vast reservoir of capital…

The farmer can afford to sell part of his surplus.

With the proceeds he can purchase more efficient farm equipment, which increases his yield.

His purchase gives employment to producers of farm equipment and those further along the production chain.

Or he can invest in additional land to expand his empire. The added land yields further grain production.

This in turn extends Earth’s bounty in wider and wider circles — and at lower cost, no less.

That is, his capital stock expands and the world benefits.

Only his original surplus allows it.

But he retains a healthful portion of his siloed grain against the uncertain future.

There is next year’s crop to consider.

If it fails, if the next year is lean, it does not clean him out. He has plenty laid by.

And so his previous willingness to save has paid him a handsome dividend.

He can then proceed to rebuild his capital from a somewhat diminished base.

We will call this man Farmer X. Contrast him with Farmer Y…

The Perils of Living Only for Today

This man has rather extravagant tastes for a farmer. And he likes to parade his wealth before his fellows.

He squanders his surplus on costly vacations, restaurants, autos, etc.

It is true, his patronage keeps local business in funds.

But his grain silo is perpetually empty.

That is, his capital stocks are perpetually empty.

He has deprived the future so that he may gratify the present… and taken food out of future mouths.

And should next year’s crop fail, Farmer Y is in an awful way.

The surplus grain that could have sustained him he has dissipated. He has nothing left to see him through.

He is thrown into bankruptcy and must sell his farm at a fire sale.

If only he had saved.

Ah, but our tale takes an additional twist…

He purchases the wastrel’s farm — at a fire sale price — and transforms it into a vastly productive asset.

The world is that much richer… and happier.

All because of his original willingness to save.

Multiply this example by millions and it becomes clear…

A healthy economy requires a full silo of grain — of savings, that is.

An empty silo means no investment in the future. And society has nothing stored against future crises… like an imprudent squirrel that has failed to save against approaching winter.

We must therefore conclude:

Negative interest rates and the war against savings are essentially wars upon the future.

Debunking the “Paradox of Thrift”

The artificial reduction of interest rates discourages normal thrift, saving and investment. It reduces the accumulation of capital. It slows down that increase in productivity, that “economic growth” that “progressives” profess to be so eager to promote.

The critic of savings will concede that saving may make individual sense.

But if everybody saved, he argues, consumption would wind to a halt.

The economy would sink further and further into the deeps, until finally imploding upon itself.

The “paradox of thrift,” they call it.

The story behind the paradox of thrift goes like this. Suppose a large group of people decides to save more. You might think that this would necessarily mean a rise in national savings. But if falling consumption causes the economy to fall into a recession, incomes will fall, and so will savings…

The government must therefore race in to supply the demand that individual savers will not.

Its role must be “the spender of last resort.”

But there is no paradox, say the old economists, with their starched collars, pursed lips… and straight laces.

What applies to the individual applies to society at large, they insist.

When society saves in lean times, it is not eliminating consumption — merely delaying it.

Or to return to Hazlitt:

It clears out the deadwood created by the previous boom, now artificially sustained.

These are tomorrow’s redwoods.

Low interest rates drain the pool of savings… and choke off nutrients from the emerging forest.

These are the errors that presently afflict and lacerate us all.

We Need to “De-bamboozle” Ourselves

But the crank, the charlatan, the quack, the pitch man, the rogue, the honest-to-goodness fraud… he will always be with us.

George then discovered “it was harder to de-bamboozle [Wilson] than it had been to bamboozle him.”

“This describes our predicament today. Keynes has bamboozled us and it is very difficult to de-bamboozle ourselves.”

Negative interest rates are your proof we are bamboozled yet…