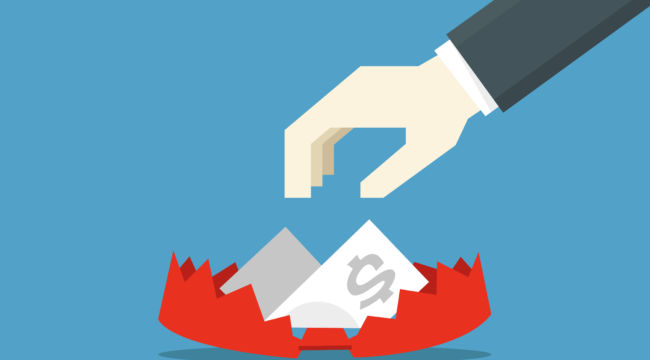 Elites Are Waiting to Spring Their Trap

Through these signals, in frequencies beyond the normal hearing… elites communicate with each other.

The messages themselves are not in fact silent — they are audible to anyone with open ears.

But open ears are not necessarily knowing ears…

Only the intended audience can penetrate their true meaning.

That audience is their fellow elites and policymakers.

Today we tune our hearing to the proper pitch, decode the latest canine whistle… and tease out the implications.

What sedition, what treason, might elites have in store for the next crisis?

Answer in a moment.

But first to the thundering cacophony of the stock market…

The Dow Jones sold off today, down 220 points.

European officials also cut their growth forecast this year. The Bank of England further warns the British economy is facing its weakest growth in a decade.

But to return to the central question…

Come now to this article, published by the Federal Reserve Bank of San Francisco, dated Feb. 4…

Its author is a certain Vasco Cúrdia of the bank’s Economic Research Department.

It bears the title:

“How Much Could Negative Rates Have Helped the Recovery?”

The answer, says this fellow, is plenty:

The Federal Reserve dropped the federal funds rate to near zero during the Great Recession to bolster the U.S. economy. Allowing the federal funds rate to drop below zero may have reduced the depth of the recession and enabled the economy to return more quickly to its full potential. It also may have allowed inflation to rise faster toward the Fed’s 2% target. In other words, negative interest rates may be a useful tool to promote the Fed’s dual mandate.

In a walnut shell…

To recover from the financial crisis, the banks should have railroaded you out of your savings.

That is, your bank should not have paid you interest on your savings — however slim.

It rather should have charged you for the burden of holding your savings.

The object is to turn your savings into a potato so hot you cannot hold them for an instant.

You must heave them into productive investment in the hope of positive return… which coaxes the economic engine to life.

Or you must spend them on goods and services, yielding the same healthful effect.

This is the way out of crisis… as the theory runs.

Thus the saver is a public menace.

How low does this Cúrdia fellow think rates should have sunk?

Model estimates suggest that reducing the effective lower bound for the federal funds rate to -0.75% would have reduced economic slack by as much as one-half at the trough of the recession and sped up the ensuing recovery. While the boost to the economy would have been negligible after 2014, inflation would have been higher throughout the recovery by about half a percentage point on average.

He goes on in the same dreadful line.

The implication is clear:

If negative rates were the solution in 2009… they must surely be in the tool bag next time.

The concept of negative rates are not new to longtime Daily Reckoning readers.

They have been adopted in Europe and Japan.

The Federal Reserve has held off to date.

But here we have a cry for negative interest rates originating within the Federal Reserve itself.

It is not the first — incidentally.

A 2017 paper from the St. Louis outpost delivered its own blast for negative interest rates.

These reports are public. They are yours for the asking.

But it is primarily eggheaded fellows within the policy establishments that read and circulate them.

Is the latest report clearing the way for negative rates when the next crisis drops?

The current expansion started in June 2009.

Should it extend through summer, it will be the longest on record… the expansion of all expansions.

That is, it already runs on time that is borrowed. And they know it well.

In event of recession the Federal Reserve would begin slashing rates again.

The fed funds rate presently rests at 2.50%. But evidence suggests it must cut 3–4% to haul the economy up.

But if it can only cut 2.50% before reaching zero… it comes upon a brick wall.

To pull the business off next time, the Federal Reserve would have to ram on through.

If additional rounds of quantitative easing wouldn’t work the trick… why not?

But have negative rates lived up to billing?

1. In eight of the 12 cases analyzed, the impact on the economy was negative.

2. In three cases, it was completely neutral.

In 11 of 12 instances… “unconventional monetary policy” proved either negative or neutral.

These elites regard us drudges as pawns upon the chessboard.

They believe they can push us around at their bidding… and we will fall in blindly behind their plots.

But the living and breathing human being is not a pawn upon the chessboard.

He is rather a joker within the card deck.

He is unpredictable… willful… resourceful.

He will not yield so willingly to the planner’s schemes.

As Jim Rickards notes, negative interest rates have actually induced their targets to save more:

The reality is the opposite of what the elite academics project. The reason savers are saving in the first place is to achieve some future goal… Savers don’t save less; they save more in order to make up the difference and still meet their goals.

But that does not mean planners will throw up the sponge… and quit.

They will instead double, triple, quadruple, quintuple their assaults until we are all broken, all loaded onto one single boat.

And so the immemorial virtue of saving will remain under ceaseless battering.

If we could only get today’s planners to sit down before this timeless proposition:

Saving is both a private and public good, a universal blessing.