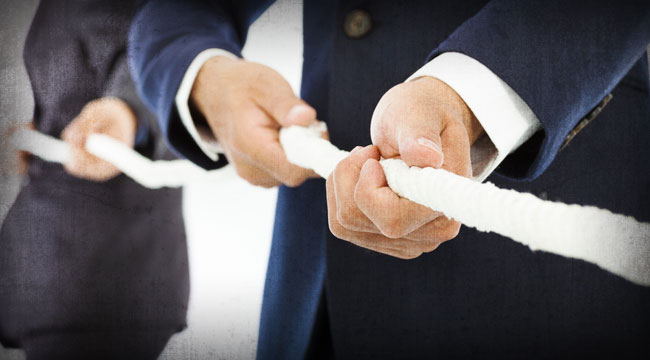 Winners and Losers in the Inflation-Deflation Tug of War

The Federal Reserve blows up its balance sheet north of $4 trillion. Inflation.

But on the other side of the rope, too many people are still too scared to part with their money. Consumers don’t run up their credit cards, businesses don’t buy new plant and equipment. Deflation.

So who’s winning the tug of war right now? Join us in the broadcast booth as we call the play-by-play…

Bank lending to business picked up steam during the first quarter, according to the Federal Reserve.

Every quarter, the Fed surveys roughly 100 banks about their lending activity. The gist of this quarter’s report, issued yesterday? A decided pickup in commercial and industrial loans, “particularly those related to inventories, accounts receivable, investment in plant or equipment and mergers or acquisitions.”

Lenders are easing their standards, in part because their competition is doing so.

Note well: This pickup in bank lending coincides almost perfectly with the Federal Reserve’s decision to start “tapering” its monthly bond buying/money printing in December. Back then, the Fed was taking $85 billion a month in Treasuries and mortgages off the hands of the banks. Now it’s only $45 billion. So the banks have $40 billion a month less of easy revenue rolling in.

Gotta make it up somewhere. If businesses are willing to borrow, problem solved.

Overall, call it a tiny tug in the direction of inflation. But wait…

Chinese manufacturing is now in its fourth straight month of contraction.

There are two competing measures of the Chinese factory sector — the government’s and a private measure by HSBC that takes smaller businesses into account. The official figure still shows growth. HSBC’s? Not so much.

The Chinese slump is worth contemplating in light of our item last week debunking the notion that China will surpass the U.S. as the world’s largest economy this year.

Turns out there’s even more to the story: According to Beijing-based economist Michael Pettis, the wonks who calculate Chinese GDP treat a huge amount of debt as if it’s government-backed. As a result, investment losses don’t actually show up as losses. Account for those losses properly and Chinese GDP is overstated by as much as 30% relative to the U.S.

“If China is much smaller than we think, or is growing at a slower rate, then that has implications — for commodities in particular,” says our colleague Chris Mayer, editor of Capital & Crisis. “You have surely heard already about how China consumes two-thirds of the world’s iron ore, 40% of its copper, blah, blah, blah.

“Given China’s growing size, a recession there is not likely to go unfelt over here — or around the world. I think when that Chinese recession finally happens, it will be a macro event for the ages.”

Score a big pull on the deflation side…

And just like that, inflation scores its own strong tug.

In 2008, economists at MIT started tracking the prices of goods sold online. The aim? To come up with a better measure of the cost of living than the horribly manipulated consumer price index (CPI) issued each month by the Bureau of Labor Statistics.

The result was called the Billion Prices Project. It tracks the daily price fluctuations of 5 million items sold by 300 online retailers in 70 countries. It also goes by the name PriceStats and is now overseen by the big bank State Street.

For the last couple of years, the Billion Prices Project tracked CPI fairly tightly — until the fourth quarter of 2013… 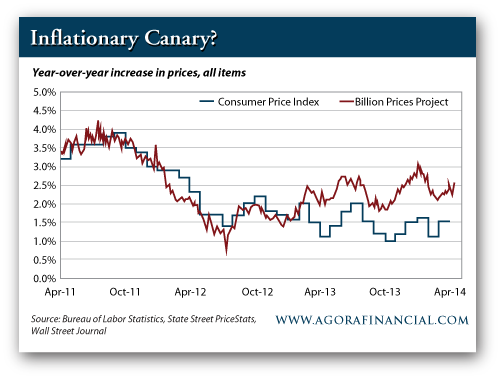 What changed? Well, remember the PriceStats index measures online goods only… while CPI is a mostly brick-and-mortar affair. “If bad weather depressed foot traffic at stores,” says a Wall Street Journal summary, “then retailers may have kept prices somewhat lower to keep the business coming in. Yet online, where purchases continue snow or shine, retailers had no need to offer discounts to bring in sales.”

Thus, the following prediction from the keepers of the PriceStats index: “Now that people aren’t hindered by weather, the CPI should converge toward the PriceStats Index, and not the other way around.”

It’s happened before: A review of our archives reveals a similar divergence between the two numbers in early 2011 — when skyrocketing bread prices set off the Arab Spring. By late summer that year, CPI here at home was approaching 4%. At present, it’s barely 1.5%.

We give up — we call it a draw, at least for now. But we avert our eyes from the tug of war at our own risk.

The aforementioned Jim Rickards agrees. “The opposing forces may have neutralized each other for the time being,” he writes in his new book The Death of Money, “but neither has gone away.” A Chinese collapse could tip us into deflation; a new hot war in the Middle East would set us up for rapid inflation. Time will tell…

P.S. No matter the tug of war’s outcome, a specialized kind of Wall Street play spotted by our own Chris Mayer will keep you sitting pretty. It affords you the chance to amp your returns 10-fold… but it also allows you to put up to 80% less money at risk. And readers of today’s issue of The 5 Min. Forecast got an exclusive chance to discover this play for themselves. Just a small perk of being a loyal subscriber. Click here now to discover how you can be one of them.

[CHART] Can You Guess This Stock?

Today, Zach Scheidt unveils a well-known company that has surged 500% in the last year, and explains why the run isn’t over…