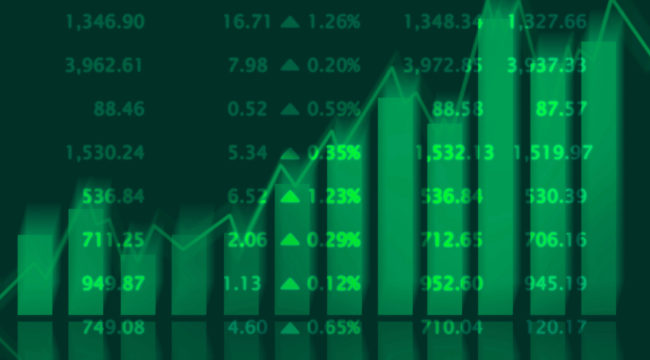 Why the Market Is Breaking Records Again

For only five months after December’s deathly plummet, both S&P and Nasdaq have regained the glorious heights.

Meantime, the Dow Jones neared to within 1.1% of its own summit.

What gusting updraft explains yesterday’s assaults upon the peaks?

And so the bluebirds of happiness alighted upon Wall Street… and sang their tuneful hymns.

Among the key companies that have reported, most of them have beaten expectations. That means we’re probably going to escape an earnings recession. That will be key for the market to rally from here.

Today was a very broadly representative day of the overall economy. That’s what’s driving the markets… If the earnings season is as strong as we expect the next major signpost is the trade situation with China and getting that resolved.

Earnings season is corroborating a lot of the success we’re seeing, and it’s really eliminated concerns around profit recession, concerns about economic slowdown and concerns about trade and China. That all has been removed from the table.

Our own Nomi Prins is a former Wall Street “insider.” She has toiled in the highest precincts of Bear Stearns, Goldman Sachs and others.

Can You Trust the Numbers?

Corporations often twist and torture earnings forecasts so they can easily beat them. That in turn lifts the stock price:

So far, earnings have been positive. This tends to be the case because companies like to manage analyst expectations downward just so they can beat them. As a result, nearly three-quarters of the companies that already reported results for the first quarter of 2019, including mega banks like JPMorgan Chase and Citigroup, beat expectations.

The lower the bar, the greater the possibility it can be exceeded. There’s more upside potential in that case, in other words. Even if earnings do fall, they look better than forecast, which gives shares a pop in response.

Still, Nomi reminds us, overall earnings for S&P companies are expected to drop 1.7% this quarter — the first negative quarter since early 2016.

And why shouldn’t they drop?

Set up to Fall

GDP growth has trended lower since last year’s second quarter. And average estimates for Q1 2019 ring in slightly above 2%… in rhythm with the previous quarter’s 2.2%.

The Federal Reserve’s New York garrison presently projects a mere 1.4% increase. If accurate — if accurate — growth will wind to its softest pace since Q4 2015.

It is true, a trade deal with China may be in prospect. But markets have already “priced in” an accord to large extent.

And have markets noted the president’s latest broadside?

Trump insists a trade agreement with the European Union include agricultural products.

The European Union insists it must not.

It is far from certain.

Asian manufacturing has likewise stagnated, although China is showing signs.

But in all, a weak brew.

And after dropping the first two months of the year, total U.S. March production slipped another 0.1%.

Yet in the one fellow’s telling, all concerns have “been removed from the table.”

But this is a slanted table… and a crooked dealer sits at its head.

He deals from a loaded deck. And his dice aren’t fair.

Here we speak of the Federal Reserve.

Perhaps the only concern removed from the table is the concern of tighter money.

After December’s stock market insurrection, the Federal Reserve threw down its arms and came marching into camp.

Rate hikes are on “pause,” it declared, and quantitative tightening would wind to a halt in September.

Financial conditions soon reversed from the tightest in 2.5 years… to the loosest in five years.

By some measures they are presently the loosest in 25 years.

Is it any wonder stocks have recaptured their wondrous heights?

We are only surprised by the short time it has taken.

From “Greed” to “Extreme Greed” Within a Week

And CNNMoney’s Fear and Greed Index has swung from “greed” to “extreme greed” in the span of one week: 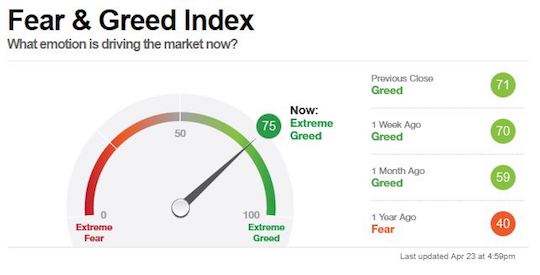 Here at The Daily Reckoning, we are leery of crowds.

When everyone is loaded onto the same side of the ferryboat, we instinctively quicken step… and run the opposite way.

Meantime, we understand the “smart money” is also fleeing the crowd.

“Smart Money Is Ready to Short”

Data from the Commodity Futures Trading Commission — a broad gauge of institutional sentiment such as hedge funds — indicates bullish sentiment has plunged 36%.

“Do not be fooled,” warns analyst Naeem Aslam of ThinkMarkets UK, ”as smart money is ready to short.”

“To short” meaning ready to bet against the market.

This shows that smart money is ready to bank big if the market falls again. Moreover, one thing is for certain when it comes to smart money: It doesn’t like to play the catch-up game.

But in fairness we concede:

The “smart money” is not always correct. Or correct in the broad sketch, but wrong in the timing.

Long and bitter experience instructs us to avoid timing markets.

Especially, that is, when the Federal Reserve is working the clock… and turning back the hands.

As we have suggested recently, markets could even “melt up” before melting in the other direction.

But ultimately the fools and their money will be separated, as they always are.

The only question is when…