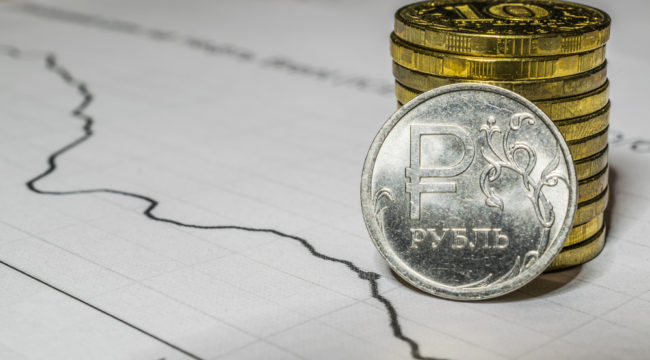 Why Is the Ruble Soaring?

“As a result of our unprecedented sanctions, the ruble was almost immediately reduced to rubble.”

The ruble has recouped most of its losses and become the top-performing currency globally… The ruble appreciated to 83 to the dollar intraday on Tuesday against a record low of 139 on March 7. Thanks to the recent rally, the ruble is only about 10% lower than what it was before the Russian invasion of Ukraine on Feb. 24.

Thus all rumors of the ruble’s demise are evidently… premature. Yet we are not one whit surprised.

Yet the question lingers: Why has the ruble regained its bounce?

What Happened to the Ruble?

Russian ogre Putin demands “unfriendly” nations — nations that have hurled sanctions at him — pay rubles for his natural gas stores.

Several unfriendly nations in Western Europe require Russian energies. And so they are whispering uncle and accumulating rubles.

Our spies in fact report that European nations are purchasing rubles under the gaming table… secretly… disguised from the public gaze.

These purchases have the ruble jumping in global currency markets.

These purchases would form a treason against the very sanctions Europe has stood up. Yet Mr. Putin has Europe by the ear. And so Europe must kneel before him.

Thus he is a very crafty and guileful fellow, this Putin.

Is the Consensus Wrong?

This account appears to contain substantial juice. It would heavily explain the ruble’s resurrection.

Yet old Daily Reckoning hand “Mish” Shedlock is not the least bit convinced it is true. He insists the consensus answer is moonshine:

Conventional wisdom on why the ruble has rallied is simply wrong… People just don’t get this. [The] ruble rally [is] totally unrelated to demand payment for oil and gas in rubles. Rather, it’s other things Russia is doing to avoid sanctions and internally force demand for rubles.

Instead, Putin implemented a National Payment Card System — known by its Russian initials NSPK. Visa and Mastercard went along with it. In 2015 Russia then forced the use of Mir cards based on NSPK. Those cards do not use the U.S. payment system.

One irony is that instead of Visa and Mastercard getting the fees, Russia’s central bank collected 8.2 billion rubles in net profit, or about $94 million at current exchange rates.

Russia… [forced] exporters to trade 80% of its euros and dollars into rubles at a discount. That creates a huge artificial demand for rubles.

Russia also restricted currency trades. People who wanted out of the ruble could not get out. In addition, Russia banned foreigners from selling Russia stocks.

Is Mr. Shedlock correct? Is the consensus accounting correct? Is neither correct? Are both correct?

We do not know. In our untutored and unprofessional opinion, each side scores its points. Yet we are fairly certain of the ruble’s future — and the dollar’s future.

The president exulted that sanctions had reduced the ruble to rubble. Yet the same sanctions may likewise reduce the dollar to rubble.

Blocs of nations have long been chasing dollar alternatives. These latest sanctions have merely forced the pace.

And the world is to its neck with miscreants — at least as identified by the United States government. They want something else.

Russia and China are pursuing developments along these lines.

Russia is evidently coaxing India to establish a payments system that skirts the dollar. All transactions will exchange rubles and rupees.

We hazard additional anti-dollar proposals will come issuing in the coming months and years.

In the longer haul, all paper currencies will likely reduce to rubble — ruble, dollar, pound, euro, yen, yuan and the rest.

History itself is the rock of our claim. History informs us that all paper currencies suffer extinction. No exceptions exist.

Paper currencies endure 27 years on average. Some live only months. Others, centuries. Yet 27 years is par.

The dollar has lived a far more enduring existence, of course. Yet like an aging starlet in the autumn years, the dollar’s high glories are in back of it.

What will fill its void? We do not pretend to know. Yet we hazard the money of the ages, gold, will fill it… partially at least.

Gold is a sort of monetary sodium pentothol. It tells enduring truths, truths inconvenient to the modern sensibility.

Gold exposes lies and the liars who say them.

“Truth, like gold, ”said Tolstoy, is obtained “by washing away from it all that is not gold.”

Truth lies presentl buried beneath layers and layers of muck, the accumulation of decades.

Perhaps it is time to begin washing it away — washing away all that is not gold.