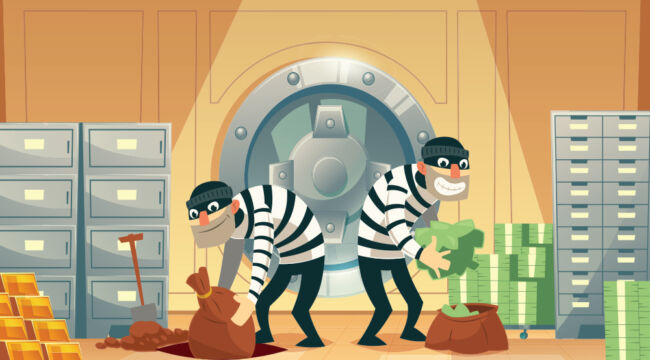 His response was a miracle of clarity, clearer than crystal and sharper than Damascus steel:

“Because that’s where the money is.”

Why does the United States government mine the middle class for tax revenues?

For the same reason the criminally enterprising Mr. Sutton robbed banks — because that is where the money is.

Mr. Biden and other boosters for the Inflation Reduction Act — so-called — shout that only wealthy corporations will suffer a deeper tax wound under the bill’s provisions.

Moreover, they insist no household earning $400,000 or less will take the bite.

“A family making less than $400,000 will not pay one penny in additional taxes under the Inflation Reduction Act,” bleats a Democratic spokeswoman with the Senate Finance Committee.

They may be correct… technically. The bill officially exempts every man jack of the middling and lower classes.

Yet as always the devil — or God — lies camouflaged within the details, hidden and buried.

Alas, the middle and laboring classes will fail to detect the old boy within the details of the Inflation Reduction Act.

Yet the tax man spots the hand of God…

The Middle Class Has More Resources Than the “Rich”

The middle class vastly outnumbers the “wealthy.” The United States houses under 800 billionaires.

The number of millionaires is substantially greater — yet still limited.

Meantime, the middle class constitutes up to two-thirds of the American populace, depending on the criteria selected.

And that middle class, to cite Mr. Sutton yet again… is where the money is.

Any meaningful tax increase must hook — and rook — the great middle class.

You may drill the corporations with higher taxation. Yet these corporations have resort to the most crackerjack tax attorneys and accountants in existence.

They are expert at identifying loopholes, wormholes, foxholes and boltholes. Corporations can burrow deeper than the outstretched arm of the tax man can reach.

What taxes they must endure they largely hand off to consumers — to the middle and lower classes.

Technically, legally, the corporations are the ones paying taxes, but ultimately that has to be paid by people, one way or the other. It’s not like Jeff Bezos — if you tax Amazon — that this is coming out of Jeff Bezos’ pocket.

Yet that is not all. The evils multiply…

These taxes may also chase corporations overseas in search of more hospitable business climates. They may take bunches of middle-class jobs with them.

And will the Inflation Reduction Act meet its advertised objective?

The Senate’s Joint Committee on Taxation:

Analyses from nonpartisan experts show the legislation would raise taxes on low- and middle-income Americans during a period of declining GDP and high inflation; raise taxes on manufacturers, exacerbating supply-chain disruptions and costing U.S. jobs and investment; and do little to nothing to lower inflation.

Citing data from the National Association of Manufacturers, the committee projects this legislation will yield a $68.45 billion slashing of real GDP…. 218,108 fewer workers… and a $17.11 billion falling-off in labor income.

In all, this Joint Commission on Taxation concludes that:

In 2023, taxes will increase by $16.7 billion on American taxpayers earning less than $200,000 — a nearly $17 billion tax targeted solidly at low- and middle-income earners next year, amidst stagflation…

At least half of all new tax revenue raised next year would come from those earning under $400,000.

Throughout the 10-year window, the average tax rate for nearly every single income category would increase.

By 2031… those earning below $400,000 are projected to bear as much as two-thirds of the burden of the additional tax revenue collected that year.

In fairness — in fairness — the bill’s drummers counter that this analysis neglects the benefits that would accrue to the middle class.

These will place the middle class “distributionally ahead,” claims a certain Marc Goldwein of the preposterously titled Committee for a Responsible Federal Budget.

As well label a gang of drunkards the Committee for Responsible Drinking.

And we are not half so convinced the bill’s proposed benefits will truly flow to the intended beneficiaries.

Each government intervention into markets drags behind it a train of consequences unintended.

We hazard its efforts to reduce drug prices and offer health care subsidies will yield increased costs and reduced care elsewhere along the tracks.

They may very likely negate the bill’s intended benefits.

We are assured they will merely police the tax-dodging wealthy who refuse to haul the appropriate freight — who refuse to “pay their fair share.”

We are heart and soul for paying a fair share. Yet we cannot define “fair share.” We do not know what it is.

Regardless, let it go. Our concern here is the present, the Inflation Reduction Act in particular…

The Rich Are Different

The new IRS goons will harass the un-civic and tax-skirting rich, we are assured.

Yet come sit down with the facts…

The un-civic and tax-skirting rich enjoy access to white-shoed tax attorneys. These wiseacres are often more acquainted with the tax codes than the IRS itself.

They can dispute IRS claims in courts of law. The IRS must expend legal costs and waste time battling away in court.

In many instances they do not find their troubles worth the candle. They will often settle the dispute out of court… and on terms favorable to the un-civic and tax-skirting rich.

The middle and lower orders — meantime — lack all access to the wealthy’s premier tax attorneys.

A TurboTax may offer you legal representation should the IRS tap you on the shoulder.

Yet with the highest respect to TurboTax, it is not Baker McKenzie.

The IRS hirees will therefore consecrate much of their efforts to hounding the middle and lower classes.

Households earning under $25,000 per year are five times more likely to suffer an IRS audit than all others.

Apologists claim these audits are manifestations of benevolence. The tax man merely wishes to ensure these sad sacks are claiming the proper exemptions.

Meantime, the bipartisan Committee on Taxation concludes that:

Fully 78–90% of tax revenues to fund the Inflation Reduction Act would come siphoning out from taxpayers earning under $200,000.

And what percentage would the wealthiest “contribute” — those earning $500,000 or higher?

The Devil in the Details

Thus you have it — the devil within the details of the Inflation Reduction Act.

As always, he is craftily hidden.

It is said the devil’s greatest deception ever was to convince the world he did not exist.