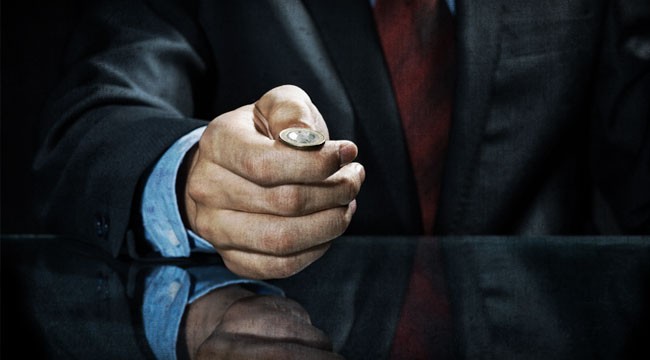 “Count no man happy until he be dead,” said Athenian statesman and poet Solon.

The man to whom Solon gave the advice was the richest man alive at the time (the 6th century B.C.) — the king of Lydia, Croesus.

Croesus considered himself to be the happiest man alive. But he discovered that fortune could turn against you, no matter how rich and powerful you were.

His son died in an accident. His wife committed suicide. And he was captured and burned alive by Cyrus, king of Persia.

And now, poor Warren Buffett must be feeling the heat. He’s 84 years old and the most successful investor of all time. Respected. Admired. Beloved, especially by the thousands of people he has made into millionaires. And “as rich as Croesus” himself. Buffett celebrated the golden anniversary of his investment conglomerate, Berkshire Hathaway, last week. And what a success!

And now, Berkshire is worth $367 billion and has $195 billion in annual revenues.

If money were what really matters, Warren Buffett would have no peer. He has had unparalleled success in this world; surely he has a first-class ticket to the next.

And if his good fortune were of his own making, what would he have to fear?

But what if fortune, which smiled on him so broadly for so many years, begins to frown?

That idea was raised back in 1984 on another 50th anniversary — the half-century mark following the publication of Benjamin Graham and David Dodd’s classic book on value investing, Security Analysis.

The occasion was used for a debate.

On one side was Michael Jensen of the University of Rochester, a leading proponent of the Efficient Market Hypothesis (EMH). (In a nutshell the EMH states that investors can’t get above-average returns without taking above-average risk.)

Jensen argued that Buffett’s success was a matter of chance.

On the other side was Buffett… who argued that skill, not luck, was behind his, and a select group of value investors’, impressive track records.

Jensen began by pointing out that when you have a nation of coin flippers, a few — by sheer dumb luck — are going to get a long string of heads… and therefore be viewed as “winners.”

Yes, said Buffett, but if all of those who were getting heads were all using the same technique (value investing) it should make you wonder.

It would be as though there were a town where no one ever got cancer: You’d want to know what they were having for dinner.

Buffett — who had been a student of Graham at Columbia Business School — attributed his early success to the aforementioned Security Analysis as well as Graham’s 1949 book, The Intelligent Investor.

The Intelligent Investor was at least the Old Testament part of Buffett’s investment bible. He was to write the New Testament himself, fulfilling the prophecy laid out by his mentor.

“He who comes after me comes before me,” Graham might have said… had he realized what his young acolyte from Omaha would achieve.

The idea was to find troubled companies (with declining margins, an obsolete business model or overhanging litigation)… buy them ultra-cheap… and have “one puff” on them as they rose back to fair value.

That worked beautifully, for many years.

But then Buffett went beyond Graham. He started to buy the whole cigar company.

Instead of just looking at price, as Graham had, Buffett started to look for businesses that had a sustainable competitive advantage.

Crucially, this allowed him to hold his investments for the ultra-long term. As he put it in the recent shareholder letter:

[T]hough marginal businesses purchased at cheap prices may be attractive as short-term investments, they are the wrong foundation on which to build a large and enduring enterprise. Selecting a marriage partner clearly requires more demanding criteria than does dating.

This focus on quality over price is what turned Berkshire Hathaway into such a money machine for Buffett and his partner, Charlie Munger. For 36 years, the duo tossed their coins and got heads every year.

But in 2000, the tails began to appear. You may say that Buffett and Munger “changed their strategy.” Or they “made a mistake.” But if their success were based on skill, why would they suddenly forget how to make money?

Last week, Buffett moved the goalposts. Instead of reporting Berkshire’s results in terms of book value only, he showed how well the company did in terms of share price.

Why he did this is a matter of some controversy.

Did he do it, as he claimed, because book value no longer gives an accurate picture of the value of his “sprawling conglomerate”?

Or did he do it because the gods have turned against him; his book value increases have underperformed the S&P 500 for the last 14 years and it is becoming embarrassing?

Buffett probably can be faulted for not being forthright in the letter about the disappointing performance of the Berkshire equity portfolio that he oversees.

Of the company’s big four holdings, American Express, IBM, Coca-Cola and Wells Fargo, only Wells Fargo has been a notable winner in recent years. […]

Buffett tends to manage the portfolio’s largest and longest-standing investments. Two managers who help run the rest, Todd Combs and Ted Weschler, have outperformed Buffett in the past few years.

Is that Mr. Jensen we hear laughing?