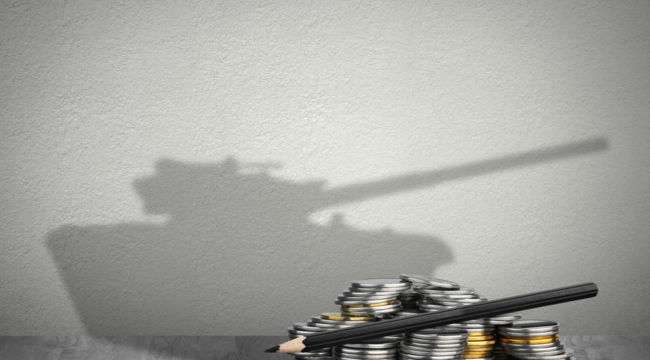 War on Cash Kicking Into Overdrive

In the depths of the 2008–09 financial crisis, Obama’s first chief of staff, Rahm Emanuel, remarked that one should never let a good crisis go to waste. You probably recall him saying that.

He was referring to the fact that crises may be temporary but hidden agendas are permanent.

The global elites and deep state actors always have a laundry list of programs and regulations they can’t wait to put into practice. They know that most of these are deeply unpopular and they could never get away with putting them into practice during ordinary times.

Yet when a crisis hits, citizens are desperate for fast action and quick solutions. The elites bring forward their rescue packages but then use these as Trojan horses to sneak their wish list inside.

The War on Cash Is Decades Old

The USA Patriot Act that passed after 9/11 is a good example. Some counterterrorist measures were needed, of course. But the Treasury had a long-standing wish list involving reporting cash transactions and limiting citizens’ ability to get cash.

They plugged that wish list into the Patriot Act and we’ve been living with the results ever since, even though 9/11 is long in the past.

Obviously, the effort to eliminate cash is hardly new. It has been going on for many years and in many forms.

Harvard professor Ken Rogoff has a book called The Curse of Cash, which calls for the complete elimination of cash. Many Bitcoin groupies say the same thing. Central banks and the IMF are all working on new digital currencies today.

The reasons for this are said to include attacks on tax evasion, terrorism and criminal activity. There’s some truth to these claims. Cash is anonymous, so it can’t be tracked.

But the real reason is because the elimination of cash would allow elites to impose negative interest rates, account freezes and confiscation.

They can’t do that as long as you can go to your bank and withdraw your cash. That’s the key.

In other words, it’s much easier for them to control your money if they first herd you into a digital cattle pen. That’s their true objective and all the other reasons are just a smokescreen.

And now, predictably, the latest attack on cash comes courtesy of the COVID-19 pandemic.

This crisis is even larger and scarier than the 2008 crisis, which gives elites even more opportunity to ram their agendas through without serious opposition. They don’t intend to let it go to waste.

Sure enough, government agents and tech vendors are now claiming that cash is “dangerous” because it could contain traces of the coronavirus.

While that’s not impossible, it’s highly unlikely and no more likely than getting the virus from 100 other sources including package deliveries and shopping carts.

Should we ban cardboard boxes and shopping carts too?

If you’re really concerned about getting coronavirus from cash, it’s simple to wear sanitary gloves during any transactions (I do). Then put the cash to one side. The virus cannot live more than 10 hours or so on an inorganic surface. After a while, your cash is safe.

But if you get scared into giving up cash because of COVID-19, then don’t complain when you find that your financial freedom is also gone when the world moves to 100% digital money.

Because that’s the endgame here.

How to Protect Your Wealth

The time to protect yourself is now. The best way is to keep a portion of your wealth outside of the banking system.

I strongly recommend that you own physical gold (and silver). I recommend you allocate 10% of your investable assets to gold. If you really wanted to be aggressive, maybe 20%. But no more.

Just make sure you don’t store it in a bank, because it would be subject to confiscation. That defeats the whole purpose of having this sort of protection in the first place.

As bad as the COVID-19 crisis is, and it is that bad, there’s one small positive to come out of it: It’s finally snapped investors out of their complacency regarding gold.

There’s only one problem. You may not be able to get any.

That’s also something I predicted. I said years ago that when you most want your gold, you won’t be able to get it because everyone will want it at the same time and the dealers will be back-ordered and the mints and refiners will shut down.

The U.S. Mint at West Point is closing. That mint produces 1-ounce American Gold Eagle coins, so this will add to the shortage of Gold Eagles. The Royal Canadian Mint also closed for coin production temporarily a few weeks ago.

Gold refiners in Switzerland are either closed or are operating on reduced hours. Gold logistics firms like Brink’s are also cutting back hours and reducing distribution of gold bullion.

You Still Have a Chance

It’s still possible to find some gold bars or coins from dealers who have inventory, but delays are long and commissions are high. The scarcity factor will only get worse as gold prices continue their rally in this third great bull market in history that began in 2015.

Gold is difficult to get now but not impossible. If you don’t have yours yet, don’t wait any longer.

If you have to pay a bit of a premium for physical gold over the officially listed gold price, don’t worry about that. It means nothing in the long run.

I see gold going to at least $10,000 an ounce ultimately, so paying a little more right now is not an issue. It’s just an indication of the skyrocketing demand for physical gold right now.

When the next panic hits, and it will hit, there won’t be any gold available at any price.