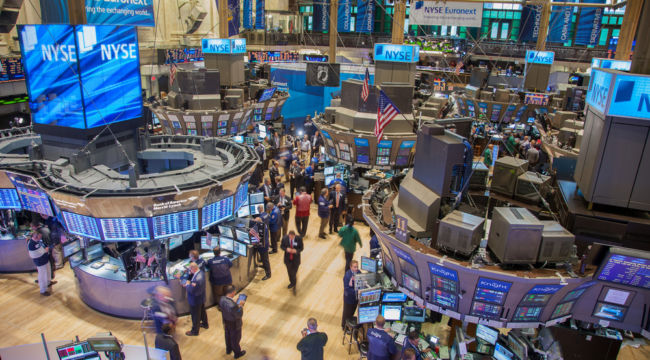 Wall Street Falls for the Ruse

The president has spoken…

A China trade accord can jolly well wait until next year’s election is done, he announced yesterday.

While the president spoke, the United States House of Representatives legislated…

The House has passed legislation that denounces the inhumanity… and sanctions certain Chinese officials for their villainous participation.

Swift retaliation it has promised if the Uighur Intervention and Global Humanitarian Unified Response Act of 2019 assumes force of law.

In brief, neither party presently negotiates from goodwill.

Meantime, the Dec. 15 deadline draws near.

On that date fresh tariffs enter effect — absent a resolution.

Given the mutual asperity presently prevailing… a resolution is far from certain.

Is it any wonder the stock market turned in losses three consecutive sessions?

Thus today was the ideal occasion for a lovely trade rumor… a gorgeous sprig of catnip to excite, vivify and invigorate the animal spirits.

I predict there is a high probability that President Trump or a senior U.S. official will openly say in a few hours that China-U.S. trade talks have made a big progress in order to pump up the U.S. stock markets. They’ve been doing this a lot.

You may hand that man a Gurkha Royal Courtesan cigar. His forecast rang dead center…

Word crossed the wires at 4:06 this morning, coming by way of Bloomberg:

The U.S. and China are moving closer to agreeing on the amount of tariffs that would be rolled back in a phase-one trade deal despite tensions over Hong Kong and Xinjiang, people familiar with the talks said… Recent U.S. legislation seeking to sanction Chinese officials over human rights issues in Hong Kong and Xinjiang is unlikely to impact the talks, one person familiar with Beijing’s thinking said.

The rumor’s source requested anonymity. But the scalawags at Zero Hedge point a razzing finger at Mr. Larry Kudlow:

There were naturally questions about the Bloomberg piece: like why does an “unknown” source who “thinks” the deal is imminent take precedence, when very known people, i.e., the U.S. president and [senior trade official] Wilbur Ross, both said a deal may not happen for almost a year… or why was this “respected” source so terrified to give his name on the record if everything checks out?

Mr. Kudlow is of course the president’s senior economic adviser — and professional optimist.

We confess it: We trust the rumor no further than we could heave a horse by its tail.

It claims, for example, “U.S. legislation seeking to sanction Chinese officials… is unlikely to impact the talks.”

But would you shake the hand of a man preparing to stab you with the other?

And we might remind you: The Chinese are notoriously sensitive to slights.

But the computer algorithms running Wall Street are gullible dupes. They will fall for anything…

Jilted 100 times by false promises, they salivated, swooned and fell for the 101st.

It is time to buy, they concluded… and set to work.

S&P futures jumped immediately on Bloomberg’s “news.” And the Dow Jones opened the day 200 points to the good.

The president did his own part to meet Mr. Hu’s overnight prediction… and goose the stock market.

Trade talks were “going very well,” he claimed this morning — one day after suggesting a deal could go on ice until next year’s election is decided.

The computers chose to believe this morning’s comments. The market leaked some steam towards the end of the day, it is true.

But we come now to this question:

What happens to the stock market if Dec. 15 passes without a trade deal?

Won’t the same computer algorithms that pushed stocks up today… pull them down?

We suspect strongly that they will.

But by how much?