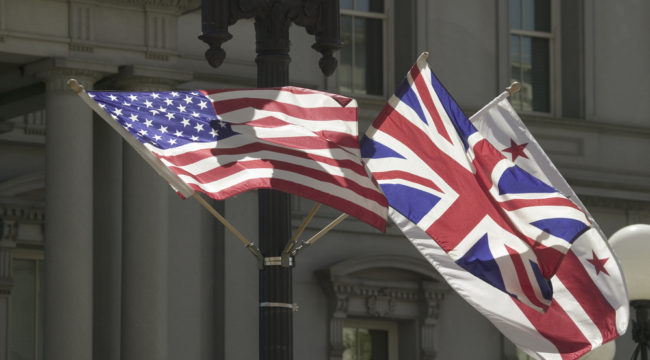 How the U.K. Turned Trump's Tweet into a $125 Million Contract

In the future, U.K PM Theresa May could look back on the canceled meeting between President Trump and Mexican President Peña Nieto on January 26 as the luckiest break in her political career (recent analysis on Mexico featured HERE).

A week after Trump took office, he and President Nieto called off a scheduled visit, and may have gotten close to starting a trade war between the U.S. and its third biggest trading partner. However, this cancelled meeting also sparked off a sequence of events with long lasting repercussions for both the U.K. and the EU, which we’ll examine.

As President, Trump has pursued his campaign vow to have Mexico pay for a border wall. There continues to be underlying tension between the two countries. But when Trump tweeted that he was still convinced Mexico would pay for the wall, this tension was brought even further to the surface.

The President of Mexico had a very public choice to make. Unsurprisingly, the Mexican reaction to the idea of paying for the wall was universally negative. Facing an 11% approval rating in his own country, Peña Nieto canceled the meeting with Trump.

The U.S. and Mexico trade $586 billion worth of goods and services annually. The countries also cooperate on security, migration and the environment (here’s even further connections between the two central banks). However, the proposed border wall would be over 1,000 miles and cost as much as $40 billion, according to MIT research. Trump’s plan is for the cost to be paid initially by the U.S.

The border wall plan has been questioned in the U.S. by the left, and increasingly by the right, too. This made Peña Nieto’s timing in calling off his visit particularly thorny for President Trump. Because he’s been so vocal about the border wall and campaigned heavily on the promise to build it, he doesn’t want to lose face. But he also promised to secure trade deals and jobs for the American people.

Enter British Prime Minister Theresa May. May was scheduled to visit the White House on January 27, the day after Trump’s tweet above. Trump’s rift with President Nieto provided excellent timing for May’s visit and potentially for the U.K.’s economic trajectory.

The U.S. and U.K. “Special Relationship”

May and Trump are already linked by the nationalist sentiment that brought them both to power. In the U.K., the citizens voted to leave the EU because they felt it would be beneficial to their personal economic conditions.

The Brexit vote was a show of disdain for the elites in power, who supported remaining in the more globally minded EU. The U.K. stock market, like that in the U.S., may have risen on the back of cheap money flowing in from global speculators — courtesy of central banks and ultra-low rates — but it left many Britons behind. Trump, who publically supported the U.K.’s “Leave” movement, appealed to the same nationalist emotion during his presidential campaign.

With their similar stance on globalism, and just days after President Nieto’s canceled meeting, Trump was in a frame of mind to be very friendly to the U.K. leader when she arrived at the White House. There, the two began building upon the “special relationship” between our countries. As a goodwill gesture, Trump even put the bust of Winston Churchill back in the Oval Office.

May played to Trump’s ego. She congratulated him on his “stunning election victory.” She also announced that the Queen has invited him to pay a state visit. Trump told her more than once that, when he goes to the U.K. later this year, “I want to see you first.”

In their talks, Trump promised to establish a bilateral deal with Britain after Brexit takes. This is important to the U.K. The U.S. provides the second biggest market for U.K. good and services, buying 20% of U.K. exports.

In 2015, the U.S. and U.K. transacted about $235 billion in total trade. (For comparison, this is less than half the amount the U.S. trades with Mexico.) Thus, the trade aspect of the “special relationship” is more important to Britain.

The U.K. is the sixth largest trading partner of the U.S. For now, only about 5% of the $5 trillion total U.S. annual trade is with the U.K. If there’s a new trade deal though, this could mean that there is a lot of room for growth.

Any new trade agreement between the U.S. and U.K. won’t happen before mid-2019, after Brexit is fully executed. In the meantime, Trump has promised to do a “quick trade deal” and a “smooth deal” with the U.K. and to honor any trade deals Britain already has with the U.S. via its EU membership until a bilateral deal goes into full effect.

Trump and May have agreed to create working groups to determine what a deal would look like and get as much done as possible. They want to hit the ground running after Brexit is complete.

EU and U.K Negotiations over Brexit

This budding personal alliance provides the U.K. with a stronger bargaining position as it enters Brexit negotiation talks with the EU. When May became Prime Minister, she promised to trigger Article 50 to leave the EU by the end of March 2017. On Feb. 1, the U.K. parliament voted to allow the government to begin its negotiations. That gave May the authority to stick to the March timeline.

The U.S. has a 60 billion dollar trade deficit with Mexico. It has been a one-sided deal from the beginning of NAFTA with massive numbers…

of jobs and companies lost. If Mexico is unwilling to pay for the badly needed wall, then it would be better to cancel the upcoming meeting.

As an EU member, the U.K. is a member of the European Single Market. There are no tariffs on trade between member states. The EU has implemented other free trade agreements between the U.K. and non-EU countries that the U.K. would want to keep after it leaves the EU.

As the U.K. enters the negotiations, May wants to have the support of many countries behind her to give her more leverage in both leaving the EU and avoiding higher tariffs when entering new trade deals.

After May’s meeting with Trump, it’s clear that the U.S. is willing to enter a bilateral trade deal. While this gives her leverage when negotiating with EU and creating other bilateral deals, the tariffs on trade between the U.S. and U.K. are just 3%.

There’s not much room to move that percentage down, but certainly the U.K. wouldn’t want it to be higher. This means we can speculate that, as part of the negotiation of trade deal with the U.S., other things will come up for discussion, including bank regulations, agriculture and the insurance markets.

When she left the U.S. with the promise of a “smooth” bilateral deal from Trump, May went to Turkey and met with its controversial president, Recep Tayyip Erdogan. She touted a U.K.-Turkey fighter jet project and stressed her desire for a better trade relationship between the two nations. She called Erdogan “an important NATO ally” and promised to bolster his country’s defenses.

On Jan. 28, Britain and Turkey signed a 100 million pounds ($125 million) defense deal to develop Turkish fighter jets, paving a path to more cooperation later. May said this deal showed “Britain is a great, global, trading nation and that we are open for business.” It is a harbinger of what can happen as a result of the U.S. and U.K.’s special partnership.

In early February, the Israeli and Italian Prime Ministers were hosted in the U.K.  May is also going to visit China soon to discuss post Brexit trade agreements. As a hedge to any trade issues with the EU, she is seeking to revive the “golden age” between the U.K. and the Four Asian Tigers — Hong Kong, Singapore, South Korea and Taiwan.

May is on a mission to secure the best trade deals she can for the U.K., not unlike Trump. After laying the ground work of a bilateral trade agreement with the U.S. — which Trump happily encouraged after the impasse with Nieto — May used that leverage to negotiate with many other countries. This allows the U.K. to come to the EU negotiating table in March with a stronger financial industry, and growing transportation, shipping and defense companies.

Increased Investment in the U.K.

The Bank of England (BOE) raised its 2017–19 growth forecast for the UK economy after Philip Hammond, a Member of Parliament and Chancellor of the Exchequer, announced a plan for higher infrastructure investment in the U.K. This is similar to Trump’s plan to increase infrastructure spending.

As Jim Rickards has detailed in his recent article, governments will use spending to try to provide fiscal stimulus and growth.

The BOE is a part of the International Monetary Fund (IMF) and the Organisation for Economic Co-operation and Development (OECD). They have raised their global growth forecasts on expectation of more fiscal stimulus and infrastructure projects from the U.S. under Trump in 2017 and 2018.

Because the pound is still relatively weak, we can expect U.K. exports to increase even further.