U.S. and Saudi Relations Are Cracking (So is the Petrodollar)

If it hasn’t been on your radar recently, it should be.

The relationship between the U.S. and Saudi Arabia is at a crossroads. The new Saudi regime has proven to be unpredictable, if not downright reckless.

Witness how they wasted two months of planning and any chance of success at last weekend’s meeting in Doha, Qatar. In Doha, 16 major oil producers met to discuss a potential oil production freeze that would drive up oil prices. The Saudis torpedoed any deal since it would benefit Iran. Of course, higher oil prices would also benefit U.S. oil producers, many of whom are struggling to survive at current oil prices.

More tellingly, the Saudis recently threatened to dump $750 billion of U.S. assets, mostly U.S. Treasuries, if Congress passes a bill authorizing the release of sensitive information implicating Saudi Arabia in the 9/11 attacks. Such a move would send U.S. Treasuries plummeting and wreak havoc on financial markets.

President Obama opposed the release of the information. He flew to Saudi Arabia this week in part to reassure the Saudis it wouldn’t be released.

That’s why I laughed out loud when The New York Times reported, “It is unclear whether the dispute over the Sept. 11 legislation will be on the agenda for the talks.”

Are they kidding? I’d be shocked if it wasn’t first on the agenda.

U.S.-Saudi interests are diverging in many ways. And Saudi Arabia’s 40-year pact with the United States is on the verge of ending. What happens next will have ramifications for the dollar for decades to come.

Today, I show you why all signs point to a rapid deterioration in U.S.-Saudi relations, and what it means for the dollar.

Coming out of the Bretton Woods Conference at the end of World War II, all currencies were to be pegged against the dollar.

This wasn’t all about faith in the dollar, though. All of the other countries weren’t willing to let the value of their currencies fluctuate with the U.S. dollar.

The Bretton Woods agreement included the U.S. dollar being pegged to gold at a fixed rate. This meant that any U.S. dollars the other countries held could be converted into gold at that fixed rate at any time.

It gave everyone comfort that being pegged to the U.S. dollar was not a cause for concern.

By the early ’70s, though, the writing was on the wall for this international gold standard system. The United States was not the beacon of financial stability it had been immediately after the Second World War.

The American debt level had soared with the Vietnam War requiring billions of dollars every month. The ratio of debt that the U.S. had relative to its gold reserves had increased by dramatic levels.

Other countries with significant dollar holdings were questioning whether the U.S. could support those dollars with gold as promised.

Many of them began cashing in those dollars for gold… as was their right. And the pace of those gold-for-dollars requests was accelerating.

With gold flying out of America’s vaults, something had to be done.

The seemingly obvious choice was for America to stop outspending its means and ease the concerns that other countries had about holding the dollar.

America’s leaders had something else cooking, and President Richard Nixon dropped a policy bombshell.

On Aug. 15, 1971, Nixon announced the end of the international gold standard. A pre-emptive strike on a massive gold run that the U.S couldn’t possibly make good on.

While Nixon put an end to the gold run, he created another problem. The value of the U.S. dollar was no longer based on the fact that gold underpinned it. The value of United States currency was supported only by the level of faith the rest of the world had in U.S. fiscal responsibility.

A level of faith that was already near a historic low.

Now, say what you will about Nixon and his administration, but what they did next was pure genius.

They devised a scheme that allowed the U.S to have all the benefits of having a fiat currency (money printing) without the usual side effects (hyperinflation). 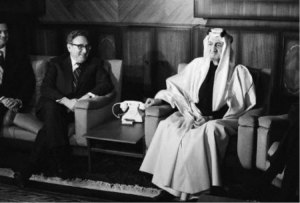 Military protection. From whom? From whomever the Saudis were having trouble with.

When you physically have in your possession something that every other nation desperately needs but doesn’t have (oil, of course)… you had better either have the biggest military presence on the planet…

Or an agreement with the country that does.

America’s promise of military support to Saudi Arabia was worth an immeasurable amount of money.

What could the Saudis offer in return that was of similar value without actually giving America oil?

The Saudis gave the United States the golden ticket.

A competitive advantage that would ensure America would be the world’s economic power for decades to come.

In exchange for protection, Saudi Arabia agreed to price all of its future oil sales in U.S. dollars and no other currency. If any country wanted to buy oil from Saudi Arabia, they would first have to buy U.S. dollars in order to make the transaction.

When Nixon took the dollar off the gold standard, it meant that its value would now be determined by supply and demand.

By agreeing to price its oil only in dollars, the Saudis ensured that there would forever be an enormous amount of growing demand for U.S. dollars.

The petrodollar was born.

With the biggest exporter nation agreeing to price its oil in U.S. dollars, everyone else followed in line.

Iran, Iraq, Kuwait and Venezuela all came on board. Qatar, Indonesia, Libya and the rest of what is now OPEC did too.

Once the entirety of OPEC was transacting in U.S. dollars, it became how oil is priced everywhere. For the oil-importing nations of the world, it meant…

Economies run on oil. Going without is not an option. This created an incredible demand every day for U.S. dollars — demand that would grow just as demand for oil does. Each and every year.

Nixon made it so the U.S. dollar was supported by the planet’s incredible thirst for oil. The deal with the Saudis firmly established the U.S. dollar as the reserve currency for the world.

And allowed the United States and its citizens to create a much higher standard of living than would otherwise have been possible.

Let’s consider how America has benefited from the petrodollar…

If demand for dollars increases, so too does the need for a greater supply of dollars.

Which is the real key to why the petrodollar has been so huge for America.

It provided the American federal government the green light to expand the money supply.

And do so without repercussions.

Every country with its own currency has the ability to increase its money supply. For most countries, though, printing money brings with it the major side effect of inflation.

More money in the system chasing the same assets drives up the price of those assets.

The petrodollar system allows the American government to get around this, because as it increases the supply of money, that money goes overseas to the foreign countries that need U.S. dollars to purchase oil.

By being able to spend more without fear of consequence, the U.S. obtained a big advantage. The standard of living for every American is higher as a result of this. The government can spend more on everything.

The might of the American military owes a debt of gratitude to the Nixon administration. As does each and every government program.

Most Americans think they pay too much in income tax. But it would be much worse without the ability of the country to continually increase the supply of money.

The petrodollar has also done wonderful things for asset prices in the United States.

With an ever-increasing quantity of dollars in circulation outside the country, many of them end up returning, bidding up the value of real estate, American stocks and bonds.

Most every American is richer on paper because of those inflated asset prices.

The demand for U.S. debt instruments is particularly inflated because of the petrodollar system.

With a constantly robust demand for U.S. government debt, the country has been able to maintain unusually low interest rates.

Three news items in the past week are pointing to a quickly deteriorating relationship between Saudi Arabia and the United States:

Sign #1 — The U.S. Senate is considering a weapons export ban or limitation on Saudi Arabia — with bipartisan backing — this is a break from decades of support in this area.

Remember, it is military support that was the carrot that the U.S. dangled in front of the Saudis, which enabled the petrodollar in the first place. Without U.S. military support, what is holding the Saudis back from accepting the Chinese yuan for oil?

Sign #2 — A bipartisan bill is being considered in U.S. Congress that could prove a connection between Saudi Arabia and the 9/11 attacks. The Saudis have hundreds of billions of dollars in U.S. assets that could be exposed to liability stemming from this… so this is a very aggressive move. The Saudis can’t allow their assets to be frozen by U.S. courts.

Sign #3 — A meeting between Obama and the Saudi king to talk about “the economy.”

The timing is certainly interesting, to say the least. Saudi Foreign Minister Adel al-Jubeir last month took a message personally to Washington. That message was simple: If you continue down the road with this 9/11 legislative bill, then Saudi Arabia is going to pull its $750 billion in assets and turn your financial world upside down.

I don’t know how feasible such a mass liquidation would be, but if attempted, it would certainly be disruptive to markets and currencies, to say the least.

With the rise of China and India continuing in the coming years, the Saudis do have more options for protection than they did back in the Nixon/Kissinger era. And back then, the U.S. was the only real market for Saudi oil. Now all future growth in oil demand will be coming from Asia making the U.S. even less important in Saudi eyes.

Negative interest rates, a near-decade of easy money fiscal experimentation and now this. My desire to own hard assets is not diminishing…