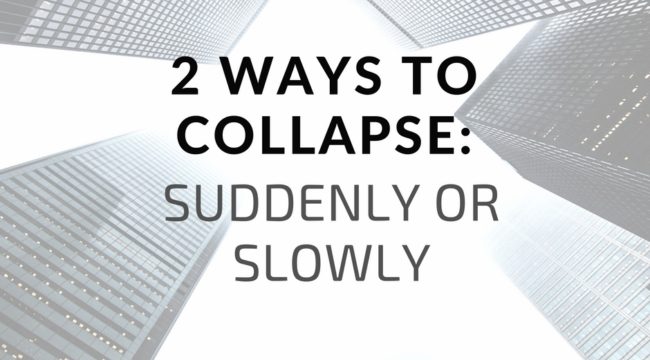 A collapse can happen at any time due to the scale, density and inherent instability of the financial system. The immediate cause of such a sudden loss of confidence is unknowable.

It could be a war, natural disaster or epidemic. It could also be a less visible dynamic such as a change in the amount of liquidity a small group of investors wants that cascades out of control. Markets will go “no bid” as asset bubbles burst all around.

The cause doesn’t matter. What matters is that it can happen quickly. None of us will know the hour or the day. Your only safe haven is to prepare now and be vigilant for indications and warnings.

This sudden collapse scenario is definitely possible (and you need to prepare for it). Still, it is not necessarily the most likely way for the dollar to fail as the leading reserve currency.

A more likely path (and the one the elites are planning) is a slow, steady, step-by-step decline. In many ways, the slow collapse is more dangerous to your financial health than the swift crash.

In a sudden collapse, you’ll know it’s happening. Even if you’re not prepared today, there may still be time to join the scramble for gold (albeit at a higher entry point).

When the ship is sinking, you don’t have to be the first person in the lifeboat; just don’t be among those who find the last lifeboat is gone. A slow decline is more dangerous because you won’t know it’s happening.

Policymakers, leaders and media will keep up the pretense that all is well. You may be lulled into keeping your wealth in markets that are going nowhere.

Elites will be pulling the props out from under the dollar, but you may not see it coming. This is not a hypothetical scenario. There is ample evidence for it.

TV talking heads and Wall Street wealth managers ignore such unpleasant truths. They tell you that stocks are up 200% since the lows of March 2009. That’s fine if you woke up from a 10-year nap in 2009 with a huge pile of cash, invested everything in stocks and sold them all yesterday. Nice job!

Far more common is an investor who rode the wave down, rode it back up again and completed a nerve-wracking round trip with his retirement savings but is no further ahead after fees and inflation.

Even more likely is an investor who sold near the 2009 lows, bought back in at recent highs and is ready to be fleeced again by Wall Street in the next collapse. Sound familiar? Hopefully, that’s not you, but it could be someone you know.

Bond markets don’t offer much relief. Short-term Treasuries have almost no yield. Long-term Treasuries offer 2% if you’re prepared to bet on no inflation for 10 years. If inflation comes, you’ll be crushed. You can score some capital gains on 10-year notes if rates fall in the short run (which I expect), but that’s a trading strategy, not a retirement plan.

High-yield corporate debt is loaded with credit risk at this stage of the cycle. The defaults will pile up as we enter a global growth recession in early 2016.

Yet, despite this dismal investment landscape, financial cheerleaders still wave their pompoms and urge you to buy stocks and bonds “for the long run.” Their assurances that all is well have been echoing for 20 years and may echo for 20 more.

Meanwhile, the financial foundation built on the dollar is rotting away…

The Dollar Has Already Had Its “1914 Moment”

The historical precedent for the slow loss of reserve currency status is the strange case of sterling.

The story begins with an event far removed from the counting rooms of London: The assassination of Archduke Franz Ferdinand, heir to the throne of the Austro-Hungarian Empire, by a Serbian terrorist in Sarajevo on June 28, 1914.

That act of political terrorism set in motion a chain of ultimatums and mobilizations that resulted in World War I. Over 16 million people were killed for no ascertainable reason. The Russian, Ottoman, German and Austro-Hungarian empires all collapsed as a direct consequence of the war.

But one empire that did not fall, at least right away, was the British Empire. In June 1914, the world viewed from Westminster was a global enterprise zone in which British military, diplomatic and financial power reigned supreme. There were competing powers, of course, but the U.K. was the most powerful politically.

Also, London was the unquestioned financial capital of the world. The pound sterling was the leading global reserve currency. And it was backed with gold held by the Bank of England. Sterling was “money good” on five continents.

When World War I began, all of the major belligerents immediately suspended the conversion of their currencies into gold except the U.K.  The conventional view was that countries needed to hoard gold and print money to pay for the war, which is why they suspended convertibility. The U.K. took a different approach.

By maintaining the link to gold, London maintained its credit standing. This enabled the U.K. to borrow to pay for the war.

It was John Maynard Keynes who convinced the U.K. to remain on the gold standard. And it was Jack Morgan, son of J.P. Morgan, who organized massive loans in New York to support the British war effort.

Initially, there were huge outflows of gold from the U.S. to the U.K. Even though the U.K. remained on the gold standard, investors sold stocks, bonds and land in the U.S.

Then they converted the proceeds into gold and shipped the gold to the Bank of England. But this gold outflow from the U.S. soon ran its course. There were only so many portfolio assets that the British could sell to get gold.

The House of Morgan saw to it that gold flows remained orderly and the U.S. lived up to its financial obligations. Then, in November 1914, the flow of gold suddenly reversed.

The British needed U.S. exports of food, wool, cotton, oil and weapons. All of this had to be paid for in either gold or pounds sterling that could be converted into gold.

The gold that had flowed east from New York to London now began to flow west from London to New York. From November 1914 until the end of the war in November 1918, there were massive gold inflows to the Federal Reserve Bank of New York and its private member banks.

It was at this stage that the dollar emerged as a new global reserve currency to challenge the supremacy of sterling. The process of the dollar replacing sterling began in November 1914. But there was no immediate or sudden collapse of sterling.

Throughout the 1920s, the dollar and sterling competed side by side for the role of leading reserve currency.

Scholar Barry Eichengreen has documented how the dollar and sterling took turns in the leading role, with the lead shifting back and forth several times. But by 1931, the race was becoming one-sided. The dollar was starting to pull away.

The rise of the dollar and the steady decline of sterling continued through the 1930s until the start of World War II, in 1939. At that point, the U.K. suspended the convertibility of sterling into gold.

This reform took place at the Bretton Woods international monetary conference held in New Hampshire in July 1944. That conference marked the final ascendency of the dollar as the leading global reserve currency. From 1944–1971, major currencies, including sterling, were pegged to the dollar. The dollar was pegged to gold at $35.00 per ounce.

The process played out over 30 years, from 1914–1944. It involved a seesaw dynamic in which sterling would try to reclaim the crown only to lose it again.

With hindsight, it is possible to see that the turning point took place in November 1914, when gold outflows from the U.S. reversed and became inflows. Those inflows continued until 1950 despite two world wars and the Great Depression. Yet no one saw the collapse at the time.

From the Bank of England’s perspective, November 1914 may have seen gold outflows, but no one believed the process of decline was inevitable or irreversible.

The belief in London was that Britain would win the war, maintain the empire and preserve sterling’s position as the most valued currency in the world. Britain did win the war, but the cost was too great. They lost the empire, and sterling lost its role as the leading reserve currency.

Looking at the massive flows of gold (that were reported here) to China, the rise of a dollar competitor in the form of the Special Drawing Rights (SDR), or world money, and the inclusion of the Chinese yuan in the SDR basket, it is difficult not to conclude that the dollar collapse has already begun.

Yet like the collapse of sterling a century ago, the decline of the dollar will not necessarily happen overnight. It will likely be a slow, steady process (at least in the beginning stages).