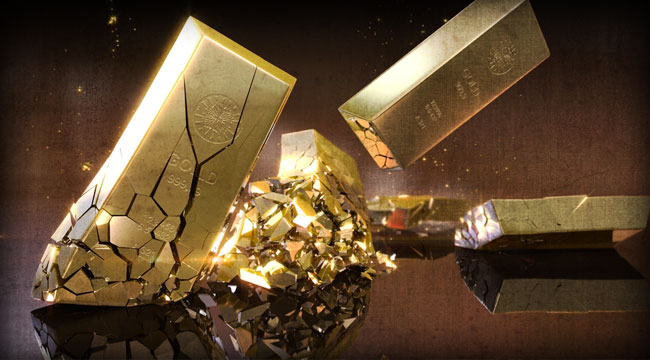 The best way to do that is to increase its voting power at the IMF and have the yuan included in the IMF basket for determining the value of the special drawing right. Getting those two things required the approval of the United States because the U.S. has veto power over important changes at the IMF. The U.S. can stand in the way of Chinese ambitions.

China accomplished that last November when the IMF agreed to include the yuan in its basket of currencies. That officially happened just a few days ago, Sept. 30.

The rules of the game also say you need a lot of gold to play, but you don’t recognize the gold or discuss it publicly. Above all, you do not treat gold as money, even though gold has always been money.

For example, Russia has one-eighth the gold of the United States. It sounds like they’re a small gold power — but their economy’s only one-eighth as big. So, they have about the right amount of gold for the size of their economy. And Russia has ramped up its gold purchases recently.

The U.S. gold reserve at the market rate is under 3% of GDP. That number varies because the price of gold varies. For Russia, it’s about the same. For Europe, it’s even higher — over 4%.

In China, that number is about 0.7% officially. Unofficially, if you give them credit for having, let’s say, 4,000 tons, it raises them up to the U.S. and Russian level. But they want to actually get higher than that because their economy is still growing, even if it’s at a much lower rate than before.

There is statistical, anecdotal and forensic evidence piling up for this. All of it is very clear. I’ve also spoken to members of Congress, the intelligence community, the defense community and very senior people at the IMF about it.

China is our largest trading partner. It’s the second largest economy in the world. The U.S. would like to maintain the dollar standard.

I’ve described some catastrophic scenarios where the world switches to SDRs or goes to a gold scenario, but at least for the time being, the U.S. would like to maintain a dollar standard. Meanwhile, China feels extremely vulnerable to the dollar. If we devalue the dollar, that’s an enormous loss to them.

That’s why, behind the scenes, the U.S. needs to keep China happy. One way to do that is to let China get the gold. That way, China feels comfortable.

Gold is liquid, but it’s a fairly thin market. If I call JP Morgan and say, “Hey, I want to buy 500 tons of gold,” I can’t do it. That would be a huge order. An order like that has to be worked between countries and central banks behind the scenes.

It’s done at the BIS, the Bank for International Settlements, in Basel, Switzerland. They’re the acknowledged intermediary for gold transactions among major central banks and private commercial banks.

That’s not speculation. It’s in the footnotes of the annual BIS report. I understand it’s geeky, but it’s there. They have to acknowledge that because they actually get audited. Unlike the Fed and unlike Fort Knox, the BIS gets audited, and they have to disclose those kinds of things.

The evidence is there. China is saying, in effect, “We’re not comfortable holding all these dollars unless we can have gold. But if we are transparent about the gold acquisition, the price will go up too quickly. So we need the western powers to keep the lid on the price and help us get the gold, until we reach a hedged position. At that point, maybe we’ll still have a stable dollar.”

Gold is still the safest asset, and every investor should have some in their portfolio. The price of gold will go significantly higher in the years ahead. But contrary to what you read in the blogs, gold won’t go higher because China is confronting the U.S. or launching a gold-backed currency.