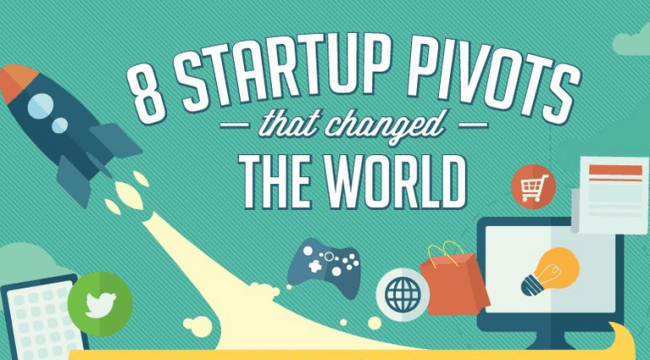 These 8 Pivots By Startups Changed The World

How do successful companies get built? Is there a predetermined formula or ideal circumstances to get off on the right foot as an entrepreneur?

When it comes to the technology world, the truth is that the most successful companies come in all shapes and sizes. Once in a while, strategy and its execution go as planned – but more often than not, a company must change its entire basis to get its best shot at winning.

In the startup world, this is called a “pivot”. It’s a risky change of direction that could end up as a game-changing success or a resolute failure. Circumstances can change fast to prompt such a desperation move.

With technological progress growing at an exponential rate, in many tech-focused businesses such pivots can even be the norm.

There are many reasons a company may shake up its strategy. Maybe the customer response isn’t what was expected, or perhaps intuition suggests that a product could be used another way with a few modifications.

Sometimes a mentor or friend may have a different vision on how something can be used, and other times a competitor can apply pressure to an early-stage startup by offering a similar or better product.

I know something about pivots myself, as my website (Visual Capitalist) is the result of a few of them.

We first started as a marketing consultancy, and then we gambled at the idea of using infographics to supplement the press releases of microcap public companies. Neither of those really were effective, but we still loved the idea of explaining the business and investment world with rich visuals – and eventually Visual Capitalist was born.

Similarly, many other companies that we cherish would not exist without these types of strategic pivots. Twitter, Paypal, Nintendo, and many others were born under completely different circumstances than we know them today.

Nintendo built vacuum cleaners and made instant rice until they thought the video game industry could be an interesting market. Nokia, which in the late 2000s was one of the biggest mobile phone makers by market share, used to have a Finnish paper mill and manufacture rubber goods in its early stages.

Today’s infographic looks at eight of the startup pivots that have changed the world.

The Secret to Acing an Interview After 50

Ever find yourself in a position where you could use a little extra cash? It happens to all of us, the ‘easy answer’ is to get a part time job. But sometimes that’s easier said than done, especially as you get older. Here are some tips to help present yourself in the best light possible on your resume and in the interview to fight the stigma of older workers and secure that job.