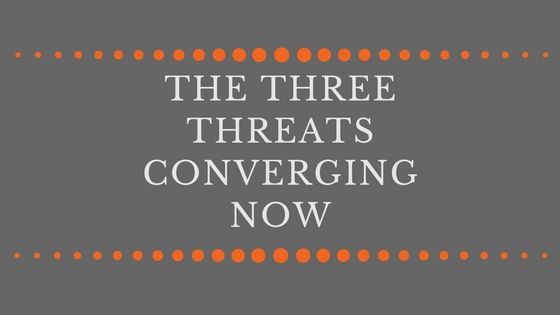 After covering the three risks converging on us right now: excessive debt, lower productivity, and the absence of central bank policy options (seen in the article here) – there more to the story.

Let’s consider specific threats to your wealth that emanate from these risks: systemic collapse, asset bubbles, and lost confidence in the ability of central banks to respond to crises. 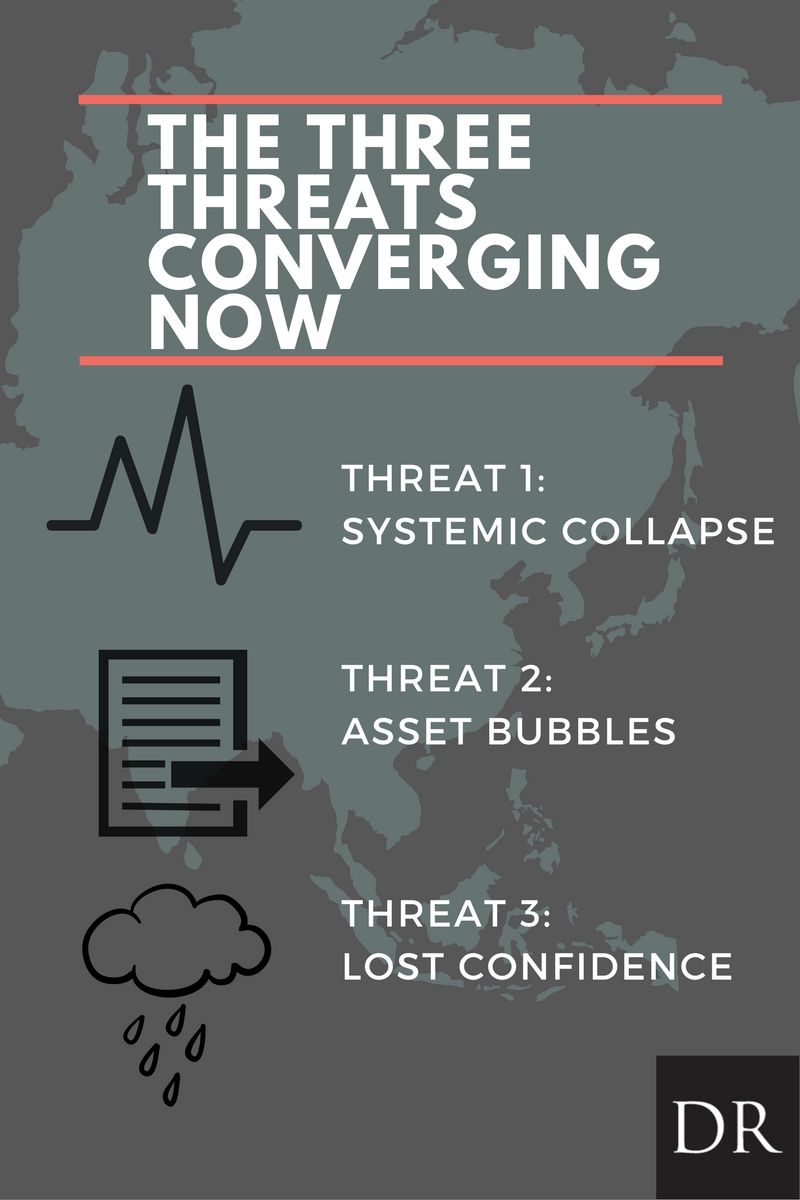 The prospect of systemic collapse or economic instability is being driven by a global dollar shortage. This sounds strange at first. How can there be a dollar “shortage” when the Fed has printed trillions of fresh new dollars in the past eight years?

The answer is that dollar debt has expanded even faster than dollar printing. Every dollar printed by the Fed has been leveraged into twenty dollars of new debt by global markets. (You can take a dive on the dollar shortage here)

The Fed put new money printing on hold with the end of QE3 in November 2014. Since then the dollar has grown stronger partly because of the end of new money printing. But, the dollar-denominated debt is still growing in the oil patch and emerging markets, and in U.S. student loans, car loans, credit cards and other obligations. A stronger dollar and disinflation make this debt more onerous and harder to repay.

We’re already seeing periodic earthquakes resulting from this dollar shortage, including the October 2014 “flash crash” in Treasury yields, and the August 2015 shock devaluation by China. It won’t be long before an even bigger earthquake is unleashed.

The Fed could address this with more money printing. In fact, I expect to see a program of QE4 sometime in 2017. But, of course, that just feeds the asset bubbles, which are a separate source of systemic risk.

When investors ask, “Where’s the inflation after all this money printing?” my answer is, “Don’t look at the supermarket shelf; look at the stock market.” In other words, we have not had much consumer price inflation, but we have had huge asset price inflation. The printed money has to go somewhere. Instead of chasing goods, investors have been chasing yield.

Part of this asset bubble inflation has to do with a flawed theory of bond/equity “parity.” The theory says that once you adjust for credit risk and term premium, bonds and stocks should yield about the same. Right now, safe ten-year Treasury notes yield about 1.65%. Many stocks have dividend yields of 3% to 5%. Investors know that stocks are riskier than safe bonds, but how much riskier? Under the parity theory, investors can keep bidding up the price of stocks until their divided yields get closer to 2%, leaving a small margin over bond yields to cover “risk.”

There are many flaws in this theory (including the fact that companies go bankrupt all the time, and boards of directors can and do cut dividends in recessions). But one of the biggest flaws is the complete disconnect between what’s driving bond yields in the first place.

If bond yields are falling because deflation is ruining the Fed’s plans to reflate the economy, is that a reason for stocks to go up? If bond yields are signaling recession, should you really be bidding up stock prices to extreme levels based on a theory of yield “parity?” This behavior defies common sense and economic history, but it’s exactly what we’re seeing in the markets today.

At some point, probably sooner than later, the reality of central bank impotence and looming recession will sink in and stock valuations will collapse. The drop will be violent, perhaps 30% or more in a few months. You don’t want to be over-allocated to stocks when that happens.

This analysis applies to more than just stocks. It applies to a long list of risky assets including residential real estate, commercial real estate, emerging markets securities, junk bonds and more. It only takes a crash in one market to spread contagion to all of the others.

Finally we come to the greatest threat of all — the inability of central banks to deal with crisis and the complete loss of confidence by investors in the efficacy of central bank policy.

The last two global liquidity panics were 1998 (caused by emerging markets currencies, Russia, and Long-Term Capital Management) and 2008 (caused by sub-prime mortgages, Lehman Brothers and AIG). Another smaller liquidity panic arose in 2010 due to problems in Middle Eastern and European sovereign debt (caused by Dubai, Greece, Cyprus and the European periphery). In all three cases, central bank money printing combined with government and IMF bail-outs were enough to restore calm.

But these bailouts came at a high cost. Central banks have no room to cut rates or print money in a future crisis. Taxpayers are in full revolt against more bailouts. Governments are experiencing political polarization and there’s political gridlock around the world. There is simply no will and no ability to deal with the next panic or recession when it hits.

This loss of confidence is plainly revealed in the following chart. It shows that consumer inflation expectations have fallen to the lowest level since late 2010 (not long after the last crisis) and the trend is clearly down, toward levels not seen since the depths of the panic in 2008: 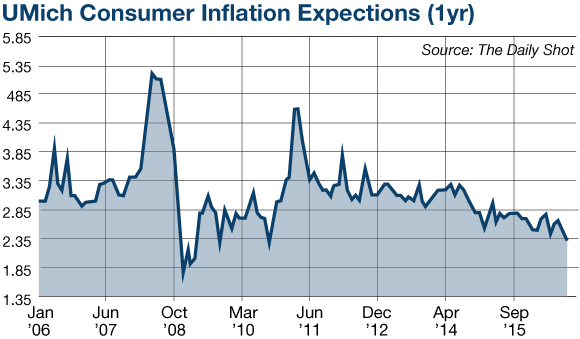 The world is moving toward a sovereign debt crisis because of too much debt and not enough growth. Declining productivity is the last nail in the coffin in terms of countries’ ability to deal with the debt.

Inflation would help diminish the real value of the debt, but central banks have proved impotent at generating inflation. Now central banks face the prospect of recession and more deflation without any policy options to fight it.

The impact of deflation and the strong dollar have caused a shortage of liquidity around the world. Since private debt has expanded faster than central bank balance sheets, a dollar shortage has arisen as debtors scramble for dollars to pay back debts. This raises the prospect of a new liquidity crisis and financial panic worse than 2008.

When this new panic hits (either from a liquidity shortage or bursting asset bubbles), investors will have no confidence in the ability of central banks to truncate the panic.