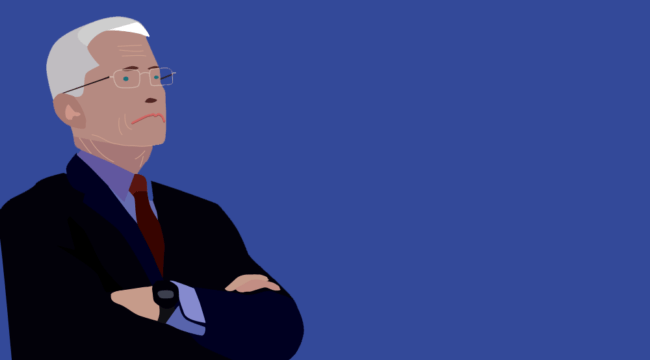 Sunday was once my favorite day. Church, then mimosas, then falling asleep on a hammock while reading TheNew York Times. Those were the days. Then church was canceled and replaced by public health messaging.

Now Sunday is the day that the insufferable Anthony Fauci holds court on TV. Whatever he says dominates the headlines for the rest of the week. Reporters let him talk and talk and are either unable or unwilling to ask any hard questions.

This time he pushed more vaccine mandates, threatened people who refuse with job loss and economic hardship and refused to say whether people should gather for Christmas this year.

With that, he tips his hand: He is going for a COVID-zero strategy. It’s impossible. The attempt alone will finally shatter the economic and social order that we once knew.

I found his comments alarming, as I always do.

My friends in Florida and Texas have been pushing back on this, pointing out that life seems perfectly normal in these states, and that’s been true for the better part of a year. They tell me just to settle down, but here’s the thing. Two-thirds of this country and the world are still in the grip of an insane idea that is wrecking the liberty we once knew.

And it’s about to get much worse thanks to these vaccine mandates.

People mostly do not know this, but the Biden administration has yet to release any sort of printed directive about these mandates that pertain to all companies with more than 100 employees. Why is this?

Probably because the administration knows for certain that what it is doing won’t pass a legal test. OSHA was not set up as a vaccine-compliance outfit. Tagging this agency for this purpose would surely be shot down by courts at all levels.

How, then, can they get away with this? By reducing the edict to no more than a press conference and a few public statements, the government is inspiring human resources departments in every company to retool and act. They are counting on the private sector to do the dirty work for them. This way the deed is done and it faces no legal challenge. And this is precisely what has happened.

It’s affecting the public sector of course. Police departments around the country are being gutted. Hospitals are firing workers. The universities are being purged. All local and state governments are dealing with a genuine crisis. And over the coming weeks, every business will have to decide to comply or land on the wrong side of the wrath of the Biden administration and openly declare themselves to be Enemies of the State.

It feels like war because it has many features of war.

I’ve noticed a subtle change in the framing of all public statements related to this. The lockdowners and pushers of mandates have been steely and cold, impervious to logic and disregarding of public opinion. They seem to be adopting a sadistic pose, not unlike what you would always find among the leadership of totalitarian countries.

It’s a chilling thing to behold an entire ruling class lose all empathy.

This tendency to outsource tyranny to the private sector is really catching on with the ruling class.

I was in a store the other day when the owner put on his mask when I walked in. I was the only customer in the store. I said that he could take off his mask. He said that if he did that he would get fined thousands of dollars just like the merchant next door.

He said that the same would be true if he failed to enforce the mask mandate against me. I wouldn’t get in trouble with the police. He would. I asked how in the world anyone would know. He said there are two ways. Another person could walk by the shop and see me without the mask and call public health, which would then call the police. They could take a picture and the merchant would be fined.

He said that a second way would be for the cops to directly enforce this. They would come and sit in the parking lots, sometimes wearing plainclothes, watching for employees who failed to enforce the mandates. If they spotted them, they would walk in a few minutes later and issue all kinds of citations.

They can do this any time, any day.

What they are after is not public health. They want money. The average local government lost 6% of its revenue in 2020 after many years of anticipating 3–5% increases in revenue year after year. They are now desperate to make it up.

Local and state governments don’t have little Federal Reserves to print money for them. They can only spend what they can tax or raise through bond sales.

So COVID compliance enforcement has become a form of taxation done in the name of public health. At this point, hardly anyone really pretends that this is somehow slowing or stopping the spread. It doesn’t do anything, but it provides great opportunities for government to further pillage private enterprise.

What matters here is that the merchants don’t actually have to believe in these mandates. They really don’t care either way. They would mostly rather see the faces of the customers, and they would probably like to enjoy the freedom to breathe. But they would rather mask up and make others do the same to avoid the tax.

The Land of the Free!

Let’s return to this Christmas issue. I have some instinct that Fauci might have gone too far this time. Of course I’ve said that before. But it’s kind of like the old rule: Fool me once, shame on you; fool me twice, shame on me.

Fauci tricked people last year. Actually most houses of worship were closed for the better part of 2020, much to their eternal shame. But now we know that it was all a ruse. This time it likely will not work.

That New Zealand has given up its zero-COVID policy is encouraging. Actually, it’s inevitable that every state in the world will have to relent, simply because the virus cares nothing about government policies.

But even after that date, we’ll be left with a rapacious ruling class that has taken from this fiasco that the public will put up with a lot more despotism than we ever believed possible, provided people are fearful enough.

Lose the fear and we find our freedom again. Unfortunately, too many people have a vested interest in maintaining that fear.