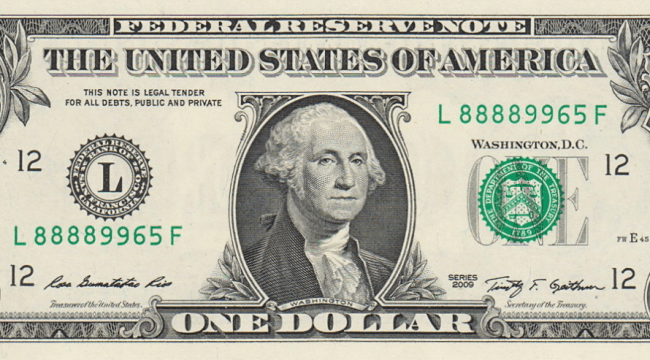 The Dollar Will Not Be Overthrown in October (Part II)

As we explained yesterday, including the yuan in the IMF’s Special Drawing Right (SDR) basket will not disrupt the international monetary system and will not overthrow the dollar as the leading global reserve currency. But it is an important sign of respect and does represent enhanced prestige, which China desperately wants.

The U.S. has veto power over the IMF’s decision to include the yuan in the SDR. The U.S. has used its clout to put China on its best behavior before the decision is made. This means China has to put an end to its currency war with the U.S. and peg the yuan to the dollar. China has done this at an exchange rate of about 6.2-to-1.

The Fed’s preferred inflation gauge, Core PCE, is trending downward and is far from the Fed’s 2% inflation target. This is an important reason the Fed will be unable to raise interest rates in 2015.

The Fed’s talk about raising interest rates is making the dollar stronger, but it’s also making the yuan stronger because of the peg. China has to tighten its monetary policy by buying yuan and selling dollars to maintain the peg. By talking tough, the Fed is forcing China to act tough.

This comes at a time when China is slowing and should be easing, not tightening, policy. Janet Yellen has the world’s two-largest economies — the U.S. and China — in a death grip at a time when these economies would normally be looking for ways to ease policy, rather than tightening.

Finally, China threw in the towel and broke the peg to the dollar on August 11. But the damage was already done. Chinese exports and imports collapsed in July and lending by its shadow-banking sector almost disappeared in June according to the latest data.

This intersection of Chinese and U.S. policy will come to a head when President Xi of China visits the White House in September. This is Xi’s first official visit to Washington as president. The exact date has not been announced, but we do know that Xi also plans to attend the U.N. General Assembly meeting between Sept. 15–28.

Since the pope will address the U.N. on Sept. 25, Xi’s U.N. speech is likely to be Sept. 23 or earlier. This means his White House visit will probably be between Sept. 16 and Sept. 21, or almost exactly the same time as the Fed meeting on Sept. 17.

A rate increase by Yellen on Sept. 17 would be disastrous for China because they would have to tighten their own interest rate policy in lock step to maintain the new currency peg informally set on August 13. This would be like Yellen poking a stick in President Xi’s eye just as he is sitting down to dinner with President Obama. That’s no way to treat a guest! So don’t look for a rate increase in September.

If Yellen does increase rates in September contrary to my expectations, it will be a shock to markets. This is revealed by the fed funds futures contract that shows traders assigning only a 40% probability to a September rate increase. If Yellen does raise rates, the probability goes from 40% to 100% instantaneously.

The entire forward part of the futures curve would then be compressed into a much shorter time frame. The impact on markets would be like multiple rate increases all at once. In that case, you should expect a global market meltdown, starting in emerging markets and ending in a collapse of U.S. stocks.

I expect Yellen to blink on a rate increase, but if she raises anyway, it will be a catastrophe. You should be more liquid than usual going into the Sept. 17 announcement, just in case.

Once we’re past the drama of the visit by President Xi and the Yellen rate decision, all eyes turn to Lima, Peru, where the IMF holds its annual meeting. The possibility of including the yuan in the SDR will certainly be discussed in the hallways and private dinners in Lima, but it is not on the official agenda and will not be decided in October.

How do I know? The IMF told us! Gerry Rice is the official spokesman for the IMF. Here’s a direct quote from Rice’s press briefing on July 23, 2015, in which he discussed China and the SDR:

“The SDR process — that’s shorthand for the Chinese request from the government of China — that the Chinese currency… would be included in our SDR basket of currencies… the SDR review is going along well… we’re expecting the formal board discussion of this issue toward the end of this year probably in November, but toward the end of the year.”

That’s straight from the horse’s mouth, no need to guess or speculate. In other words, there is no global monetary reset coming in October regardless of what you may have read elsewhere.

Even the November 2016 “discussion” is not decisive. On Aug. 4, 2015, the IMF announced that the final action to update the SDR basket will be extended to Sept. 30, 2016. That delays any action with respect to China another year.

More importantly, it means another year of yuan-dollar finesse and another year of deflationary forces if the Fed keeps talking tough and China is forced to go along in order to be admitted to the SDR.

Including the yuan in the SDR next year will be a highly important symbolic step, but it will have no immediate impact on the international monetary system. The yuan is not even close to replacing the dollar as a global reserve currency. There are not enough yuan-denominated sovereign bonds for investors to park their reserves, and there is no well-developed yuan bond market to provide liquidity.

China has been buying a lot of gold, but it has printed more money than the Fed the last six years and has nowhere near enough gold to launch a new gold-backed currency.

The most important thing for you to understand is that China does not want to rock the boat — they want to join the club. This means the IMF’s special club of SDR members. The future world reserve currency is not the dollar or the yuan. It’s the SDR.

The impact of a September 2016 decision to include the yuan in the SDR will resemble China’s recent updating of its gold reserve position. It happened, but it was not the big deal many expected it to be. That’s just how the global elites like things — slow and steady. There is a plan to steal your money with inflation, but it consists of many small steps, not a few big ones.

So the critical date this fall is not October. It’s Sept. 17. I don’t expect the Fed to raise rates then, but if they do, look out below. Markets will have no bottom.