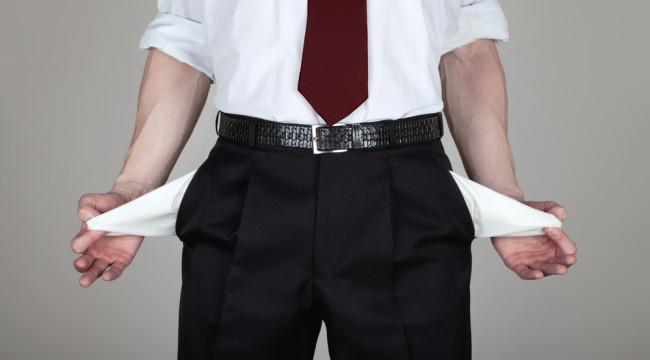 The Debt Icaruses Are Flying Too High

MELBOURNE — The Dow Jones has recovered around 10% since its August low. However it is not a recovery built on strength…

The weaker the economy, the less likely an interest rate rise is. Bad news is good news…apparently.

The more the IMF talk down the outlook for the global the economy, the more Wall Street finds reason to nudge the share market higher.

This is the investing world the Fed has created. Black is white.

In Australia the odds are getting progressively smaller on an interest rate cut in 2016. Another sign that all is not well on the economic front.

No doubt the local market commentators will also see falling rates as a call to arms to buy shares.

In my naive world, if the economy is struggling then surely corporate earnings will struggle too, and cost cutting measures (redundancies) will follow. Which further dampens economic activity. Lower corporate earnings surely means lower share prices.

Obviously this is not how others join the dots.

Why is the economy struggling to gain traction? There is a point where debt becomes toxic to the system. We passed that point long ago and the toxins are working their way through the economic body.

According to Greek mythology, Icarus tried to escape Crete with wings his father made of feathers and wax.

Icarus ignored his father’s words of wisdom and flew too high. The rest is history.

The moral of the myth is a warning about complacency and hubris. Take heed of wiser heads.

History is replete with stories of ego and overconfidence making people believe they were somehow special and it would be different for them.

It never was and never will be.

This chart represents the Icarus’s of debt. Every major western country has their own set of wings — made of abundant credit and falling interest rates. 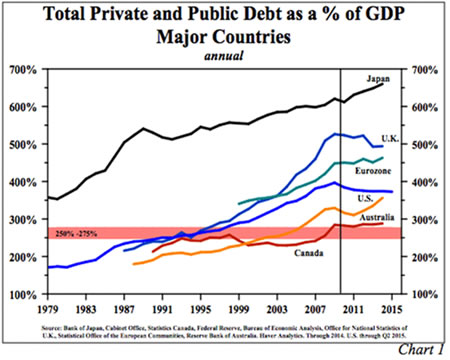 Japan leads the pack. Even if they wanted to, Japan can no longer change course. Too much debt and an ageing population mean Japan has no option other than to keep flying higher. Japan’s wings of abundant credit and ultra-low interest rates have so far (to the surprise of many) kept the country aloft. Can they continue soaring higher? Perhaps. But the higher they climb, the harder they’ll fall.

The only other country flying substantially higher since the GFC (vertical black line) is Australia.

The combination of increased government debt and private sector borrowings for (predominantly) Sydney and Melbourne real estate have further indebted our country.

The lessons of the 2008 debt crisis have obviously been ignored. We are The Lucky Country after all, and haven’t seen much economic hardship for a quarter of a century. Remember hubris and complacency come before a fall.

Knowing that soaring debt levels always end up with an economy falling back to earth, our Reserve Bank still actively encourages the acquisition of more debt:

‘In such circumstances, monetary policy needs to be accommodative. Low interest rates are acting to support borrowing and spending.’ This wording (or very similar) has appeared in the May, June, July, August, September and October 2015 RBA statements on Interest Rate policy.

Other major countries have either flat lined or decreased debt levels as a percentage of GDP.

For example, prior to the GFC, UK debt levels climbed well above the pack due to private sector borrowings to participate in the property boom. After the GFC, UK private debt levels have been in retreat…but total UK debt is still way too high.

When you replace those percentages with dollar amounts, the size of the problem starts to come into focus.

And so it goes on and on for each country. This is how the global debt pile of over US$200 trillion has been built.

All those colourful ascending squiggly lines represents money that has been borrowed (and as yet, not repaid) that has gone into economic activity over the past 30 or so years.

A debt is an advance on tomorrow’s income. Initially the injection of borrowed funds gives the economy a boost and the GDP numbers look good.

Imagine if every household in Australia all decided today to borrow money to buy a new car. Wow, Australia’s GDP number would be the envy of the world. But if we did not repeat this exercise again next year, economists would declare we had negative growth. What rubbish.

Bringing forward future expenditure is not sustainable or genuine economic growth. It is a statistical illusion.

Year after year of debt accumulation has done a couple of things:

Academic studies indicate a debt to GDP ratio of 250–275% is where debt starts to become a burden on an economy. Growth slows because there is no room left in the budget to service new loan commitments. Borrowers see the balance sheet with enough red ink on it already. They decide to pay off what debt they have and not get new loans.

Does that sound familiar?

If it does then multiply that by a factor of millions. All around the developed world that same conversation is being had in households and to a lesser extent, boardrooms. Which is why, with the exception of Japan and Australia, debt levels are stagnant or falling.

As households reevaluate borrowing levels, Governments have stepped up and borrowed more in an effort to plug the gap. The illusion of growth must be maintained.

When our government, the RBA, the IMF or the Fed talk about resumption of normal economic growth rates, they are in a fantasy land. They knowingly tell us lies to create the impression of control.

They have built an economic growth model that is simply unsustainable. One that relies on greater levels of debt every year to move the GDP needle.

But what happens to the model when households say no more or are moving into retirement?

Well that’s what we are seeing now.

A world built on debt is now crumbling under the weight of that debt.

As Icarus found out, there’s a point that you cannot go beyond without having fatal consequences. Icarus was a myth meant to warn us about the dangers of hubris and complacency.

But we have had too good for too long. We’ve been conditioned to believe this is how an economy functions. We have become complacent because the Reserve Bank itself actively supports and encourages society to borrow and spend more.

When the debt Icarus’ of the developed world fall back to earth It will become a legend. A legend to be told for decades about the arrogance of central bankers and the complacency of people who put their trust in a system that was built to fail.